Down in Pacoima Creek sits a crumbling tunnel from the 19th century that stands testament to the era of ambitious mining in the San Gabriels. Gold, silver, titanium, and graphite were all mined in Pacoima canyon. The old prospector known as Dutch Louie discovered gold placers along the streambed.  In order to recover the gold from the creek in a “distraction-free” way,  Dutch Louie & associates carved a tunnel through the rock to divert the creek.The tunnel is anywhere from 100-200 feet long and till this day still diverts part of the seasonal Pacoima creek. 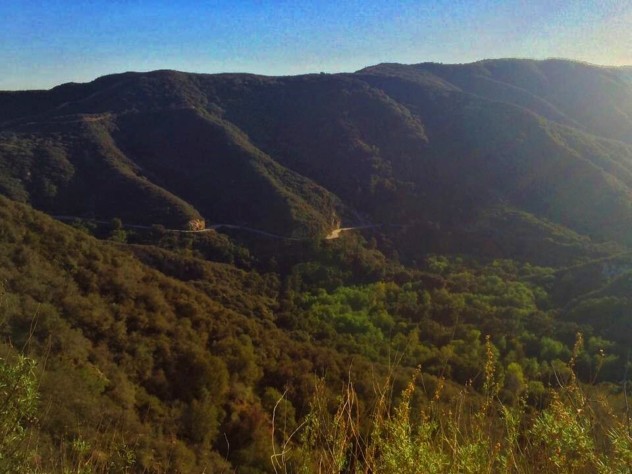 Shady Pacoima canyon with Little Tujunga Road slithering around above it.

The hike starts at Dillon Divide from Little Tujunga Canyon Rd. Only a short distance on the wide dirt road will take you to the single track trail down to beautiful Pacoima Canyon.

If the seasonal creek is flowing, you’d have to cross it several times. Eventually the trail will lead you to Dutch Louie flat (formerly a campground) and just beyond that sits the hidden tunnel. One can easily imagine where Dutch Louie recovered the gold in the creek bed. 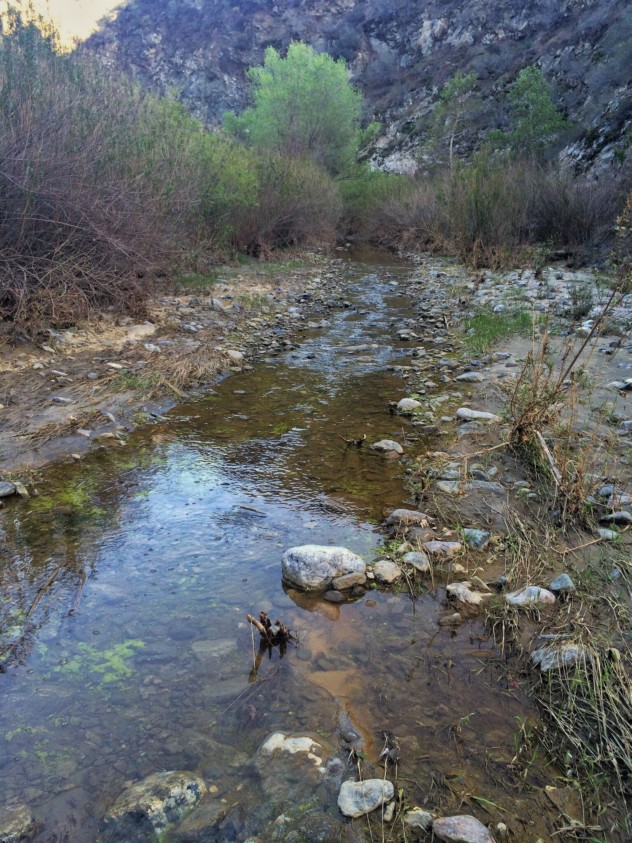 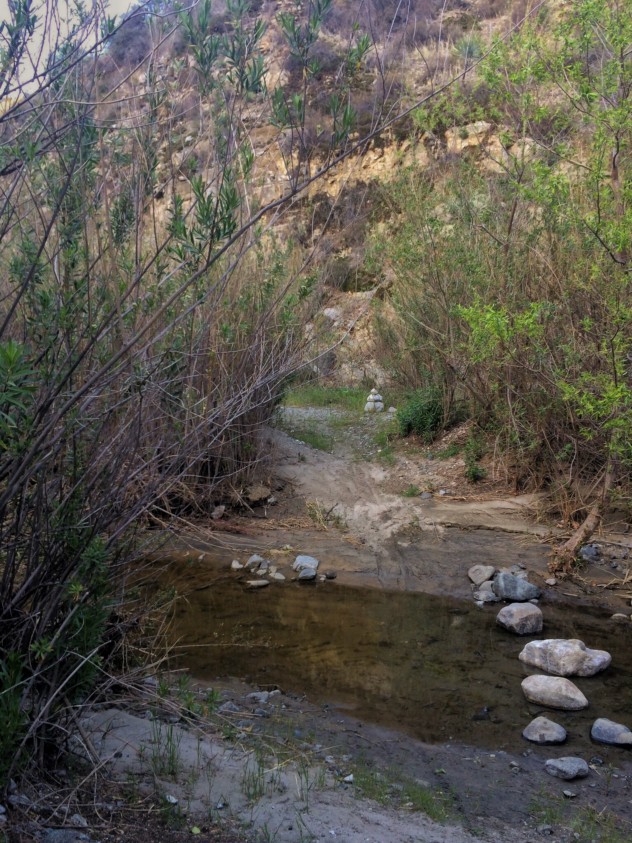 Cairns left for some guidance. Getting close to the tunnel. 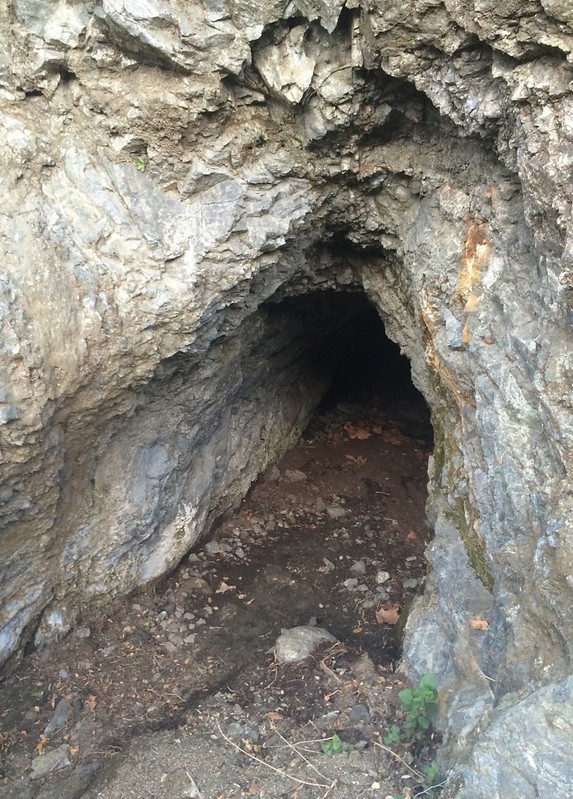 Dutch Louie Tunnel! Unfortunately we came when there was no flow through it. 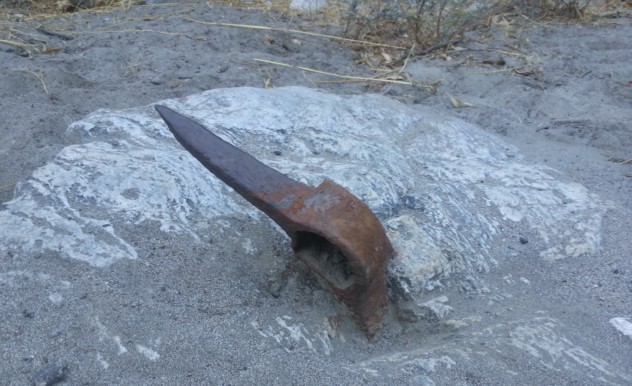 Rusted tool on the rock, maybe a relic? 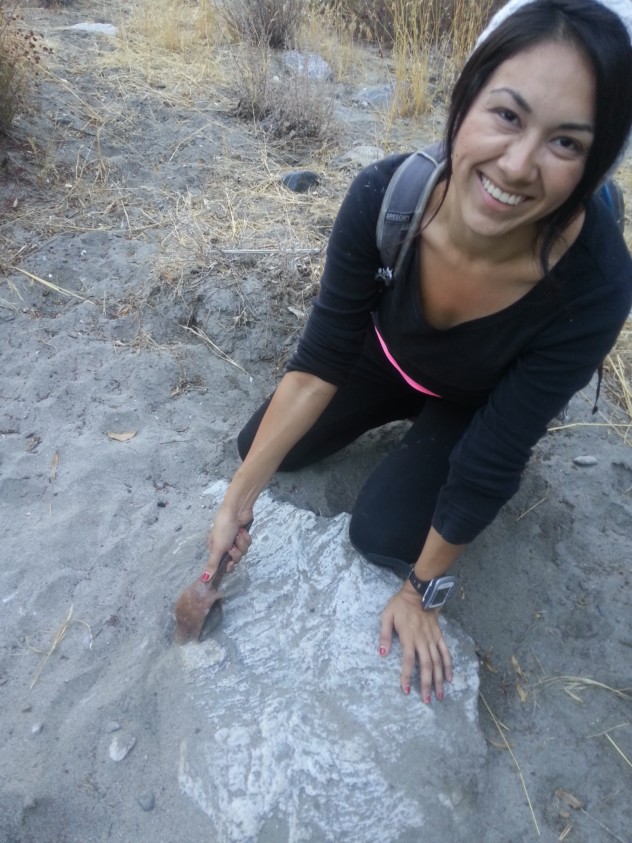 Doesn’t seem to come off with my super-human strength…

If you continue up Pacoima canyon you eventually reach Dagger Flat. Legend has it that an old prospector was stabbed to death here in the late 19th-early 20th century. Who was the culprit and was it Dutch Louie who was stabbed? The answers are forever lost to time. 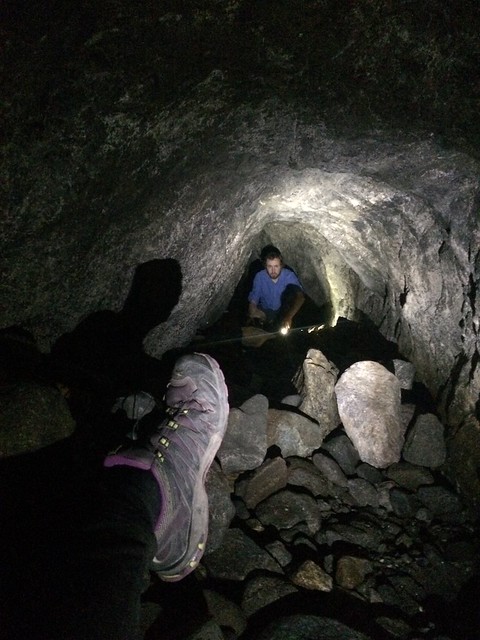 Jeremy in the tunnel with the prospector ghosts.

I went down to Pacoima canyon again after having read about a titanium mine further upstream passed Dagger Flats…. 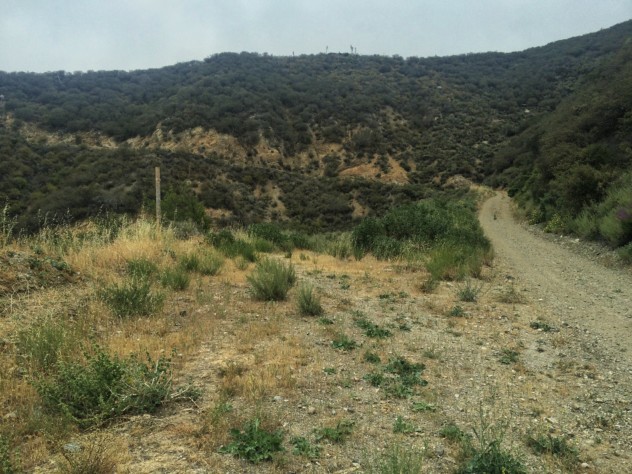 Mendenhall Ridge Road and the single track trail to Pacoima Canyon on the left, marked by a heavily shot pole. 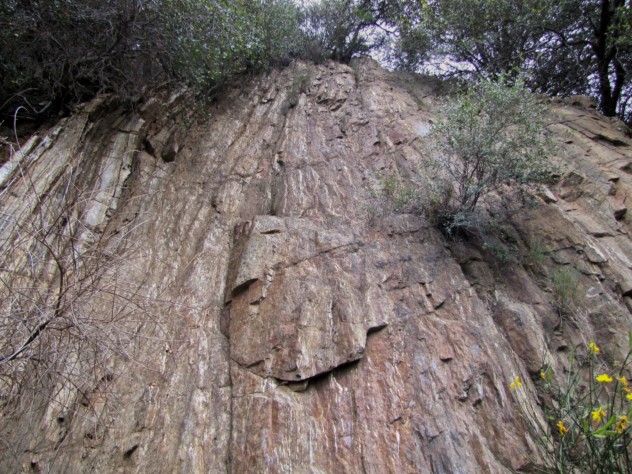 Passing by some interesting geology… 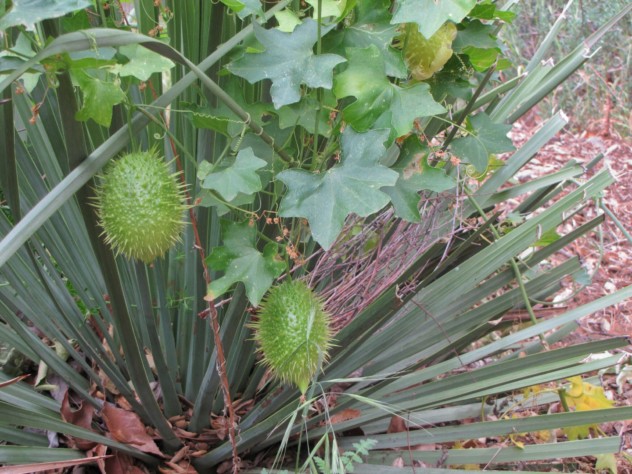 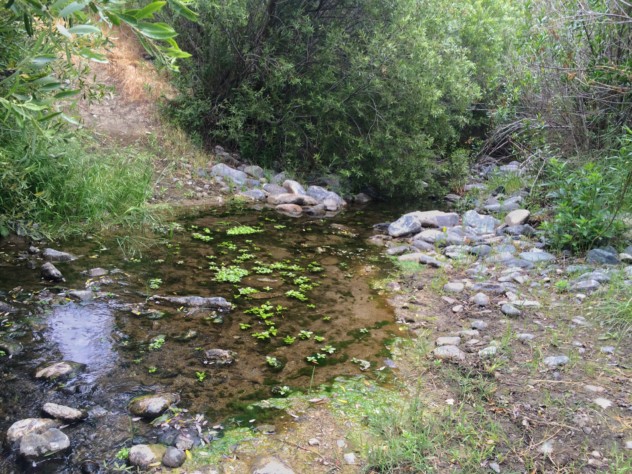 Down at the canyon, a still Pacoima creek. 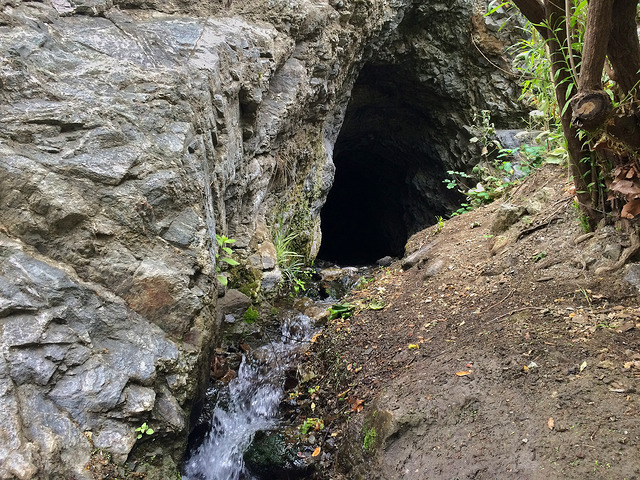 The Dutch Louie Tunnel with the creek flowing through it! Last two times I came to visit there was no stream… 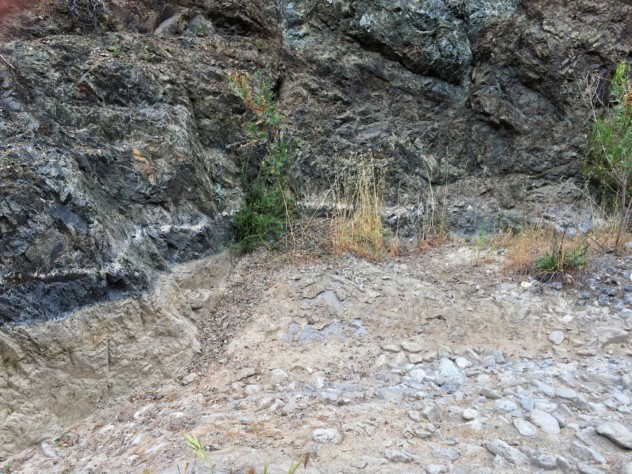 The other side of the tunnel where the creek enters the tunnel. Its actually all underground, buried under that mound of dirt. 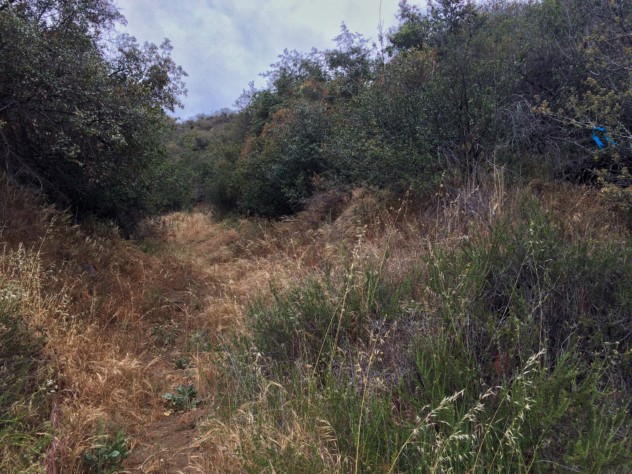 A look into what used to be the Dagger Flats Trail 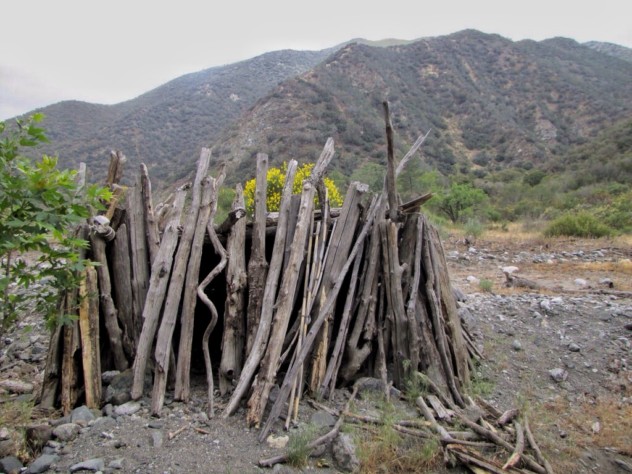 At Dagger Flats….Dutch Louie are you in there?? 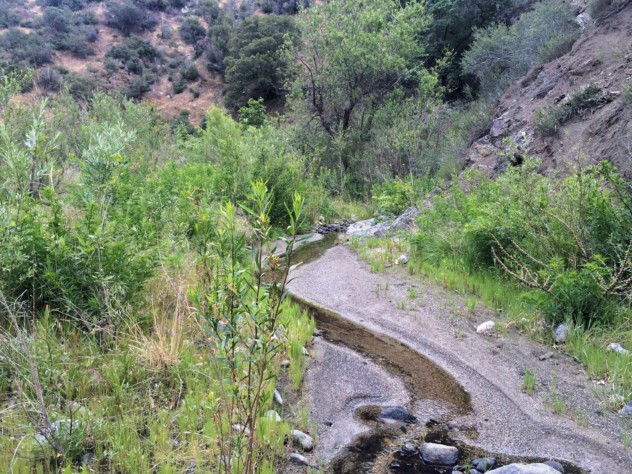 Going past Dagger Flats, no sign of any trail, but you stick to the creekbed which was dry most of the time. 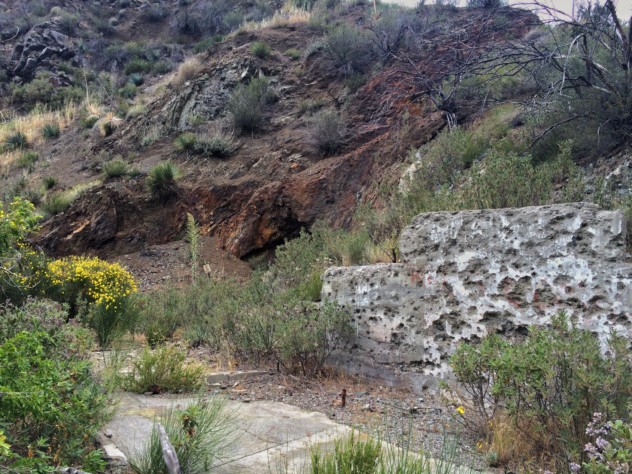 Gave up on finding any mine bend after bend. Was very pleasantly surprised to find it! 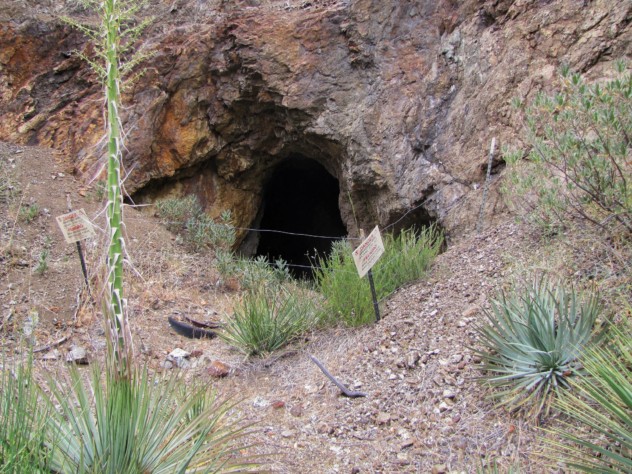 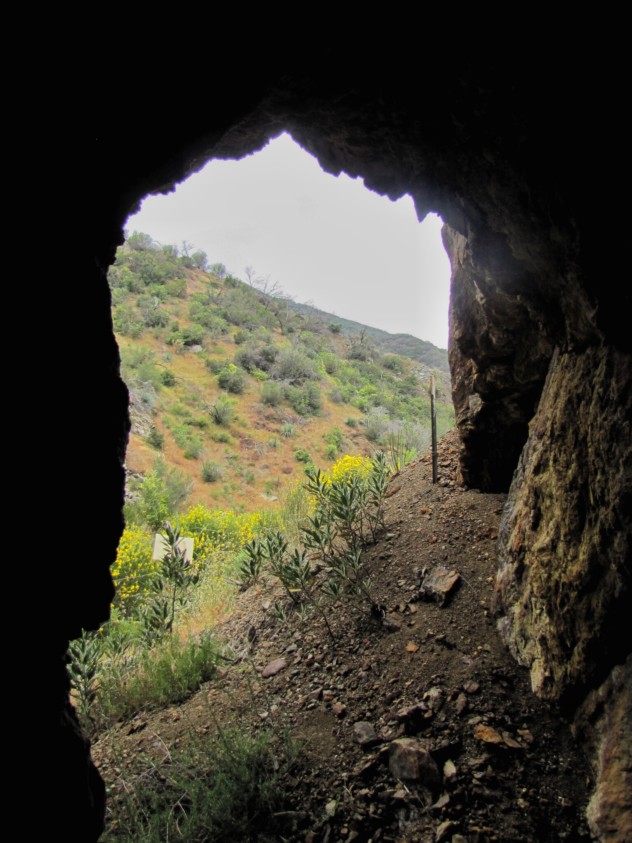 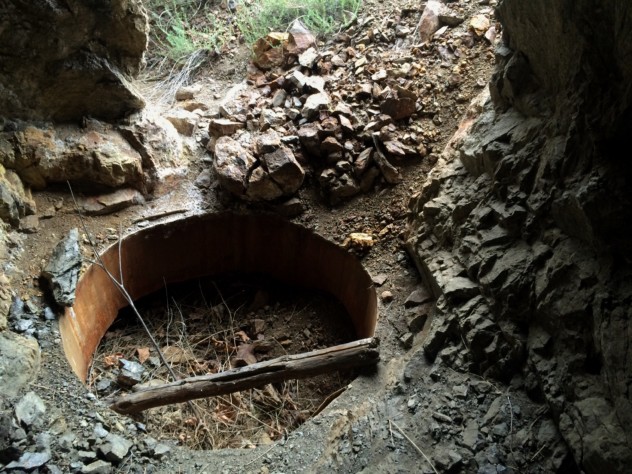 Small Pit inside the mine 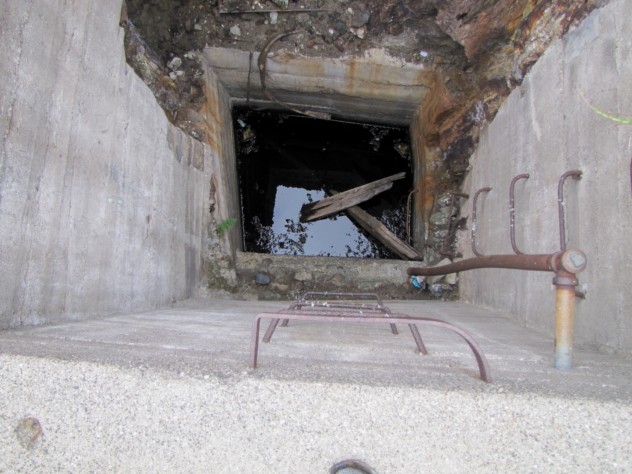 Some long water tunnel next to the mine.

The minute I stepped out of the mine, a fire-rescue chopper came and spotted me somehow, way deep in the canyon. They flew by but once they spotted me, circled around me a few times. I made eye contact with them feeling confused at how they found me and why they were there. A second later, they took off. What a coincidence??

I returned the same way I came in, having spotted what looked like some falls. I scrambled up to check it out but it was only dry moss in the form of a waterfall. It looks like it’d be a cool fall when there’s water running down it! 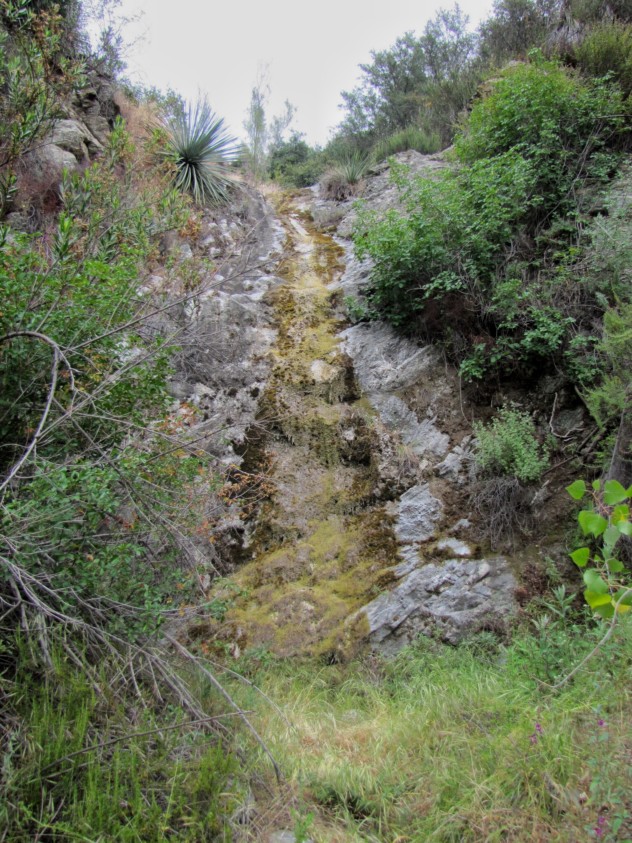 I wish I had been there when you hiked in. I’ve been working on the trail since 2003 and have cleared it to Dagger Flats. A lot of work. I would like for it to continue to where you hiked to and perhaps some day to where it meets the Edison power line road 3N32 but I’m old. I’ve just retired and will spend more time working on it (TU,TH,& SAT). Please come back again

Very neat! I’ve actually met you before briefly. The first time I was heading down to the canyon with someone and you were riding your bike up. You told me you’ve been restoring the trail. I then asked you about Dagger Flats and if we could make it before sunset, and you said not likely. That day we only had time to visit the tunnel and walked up the trail during sunset. When I went last week, I saw an old truck parked at Dillions Divide, and I assumed I was going to see someone down at the canyon, but ran into no one. I was spooking myself out because I was alone. It was very beautiful so much green, trail cairns are easy to follow and I noticed they stopped at Dagger Flats. The mine was a beautiful surprise! Never would have thought I’d find it. Any other history or secrets that you can tell about the canyon?

Great blog with great photos! We just went down there for the first time over the weekend. Way too many cairns as the trail is wide and easy to follow. The creek was dry in most spots but the water through the Dutch Louie Mine was flowing nice and cold. Apparently in the right tunnel, there is a vertical shaft with rope but we decided not to push our luck as it looked very unstable up above. Anyone ever publish a map of it or does it just end there? We found the makeshift hut in Dagger Flats and a broken “Zombie Killer” blade nearby. Wish we had known about the titanium mine so could have pushed on to reach it (any idea how far from the hut?). We saw bats, hawks, bees, and a 4′ gopher snake. Hauled out a fair amount of trash to throw away (mostly used bullets and shotgun shells). Looking forward to exploring more of the area sometime.

Thank you for giving back and cleaning up! As for the Dutch Louie tunnel, we also have walked over to the rope and tried climbing up with it, but it didn’t look like anything was up there. Maybe a rock upper shelf or something. But then I don’t recall. If Someone has mapped it, SoCal Grotto would have…as for the titanium mine it’s not more than 45 minutes or less to reach it (from dagger flats). Just follow the creek bed, at times gets overgrown and wet. It’s not far of you think about it, but the fact that you have to go back the same way, with the climbing can make it feeling. I look forward to exploring the western Sam Gabriels too! So much history ☺️

Great photos and fun writing. I’ll have to hike down in there soon. Some great history. I have ridden my mountainbike along Mendenhall ridge out to “Indian Ben Saddle” and looked down “Buck Canyon.” Seems to be a trail heading down into that canyon. Always wondered if that was a complete loop or not. Would be a fun one.

For the pass year our hiking club has been working on the Dagger Flat trail. We have over 1 mile of trail done from the Santa Clara Divide Road to Pacoima Cyn, still 1.5 miles to go. Next year it should be completed. If you hike pass the titanium mine you will come to Dorothy Canyon. There is a spring in the canyon that feeds a small creek. You can find two water falls here. As for the chopper, they are looking for marijuana. There was a big bust inside Dagger Flat canyon a few years ago. There is a master plan to build a trail from PCT to the ocean. One of the plans call for the trail to leave the PCT at Messenger Flats, take the trail to Lightning Point, follow the Trail Canyon Trail, pass Indian Ben Saddle, into Pacoima Canyon. Hike down the canyon to the Dagger Flat trail then up to the road. Hike the road across Sand Canyon where you will pick up a existing trail to the 14 freeway. There is a animal underpass under the 14 and Cal Tran has already constructed a walking path over the 5 freeway to Towsley Cny park. Many more problem to work out but the City of Santa Clarita and the ANF has agreed on a plan. It’s a start.

Hi Missy:
If you’re ever up that way again there are two more mines above the Titanium mine. The first one is about 27 minutes above the one with the cement structure (if you walk through the middle of the stream). You’ll find an old wrecked car chassis buried in the stream bed. Just past that and on the left wall there’s another mine, partially walled up but easy to get into. It’s about six feet tall on the inside and goes in for approx. 100 feet.

The other mine is wayyyyy upstream close to Laurel Canyon. I haven’t seen that one for myself yet, but it has a metal frame at the entrance.

Best to do this in trip in the winter time, there’s lots of water up there right now, but strangely the Dutch Louie has dried up on the inside.

Thank you for sharing your experience. I went yesterday and had a great time. As we made our way to Dutch Louie’s tunnel we were pleasantly surprised to see neon pink tags as well as the carins marking the trail. It is overgrown so it really was an adventure. Making our way back, just before you ascend the canyon, we had a rattlesnake encounter. It was about 11:30am and it seemed to be taking in the shade from a bush on the trail. We didn’t see it and it didn’t see us until we were right on it. We backed up and cleared it from the trail by trowing rocks and hitting the nearby brush with long sticks. We waited until it seemed clear and ran past that section. Needles to say, we were very weary as we continued our ascent. All in all it was a great hike and made for a cautionary tale. We are looking forward to going back further to find the mines.

Thanks again for documenting the area.