High in the south face of Iron Mountain is a mine “discovered” by the experienced prospector, John James Allison and his three sons. The Allison mine was worked intermittently from 1915 until about 1942. Its located high up in Allison Gulch, a tributary of the East Fork of the San Gabriel river.

On a weekday, Ryan (AKA Taco) and I decided to fulfill our thirst for adventure by checking out Allison Mine and rappelling down Allison Gulch. Over the years the buzz around this mine was that it was hard to get to because of a non-existent trail. The Allison Mine trail has not been maintained by Forest Service in 60+ years. The readings on this mine have also been interesting. On Hugh Blanchard’s site, lagoldmines.com, Allison mine is listed under his “Mines we will never see” section. Also noted on his site was his experience:

“The last time I tried it I sprained my ankle in a rockfall and had to hobble down Allison Gulch and the East Fork with its 13 river crossings, in darkness most of the way, until finally reaching my car at 2 am.  Not a fun trip!”

Rest in peace my dear explorer, your efforts and experiences will always be remembered.

To get to Allison mine we planned on hiking up Heaton Flats to Allison saddle, descending Allison Mine trail and then rappelling down the gulch. This meant a bright and early start because Heaton Flat trail gets hot!

A late start (10 am) meant I was soaking the glorious heat going up Heaton Flats trail. It had been awhile since I did any hiking so I was sluggish. I was really affected by the heat so that was painful to push through. But in due time we hit Allison saddle. The higher we climbed, the views opened up more and the weather cooled a bit. We were amongst the clouds. 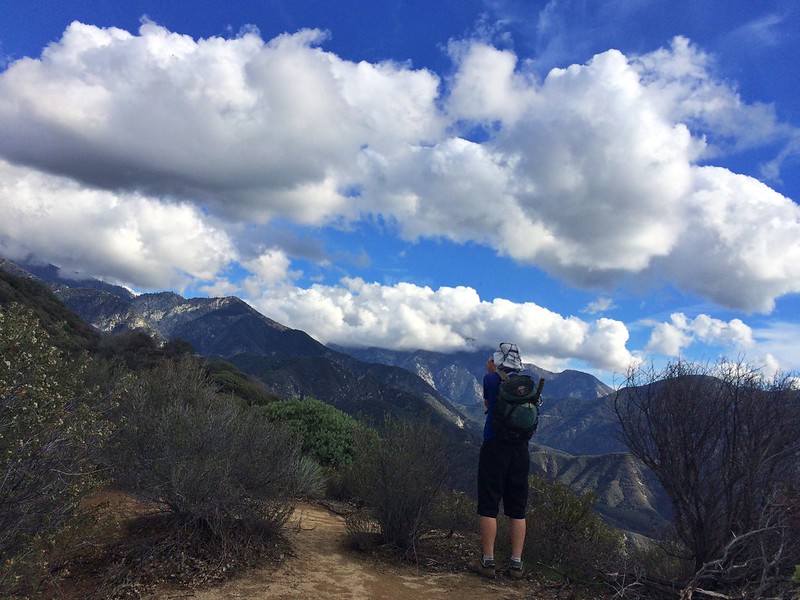 Taco soaking up the scene.

Heading down Allison Mine Trail, in rough but doable condition. Photo by Taco.

There were of course those areas in which the trail was in a slight state of disrepair but it actually improved the further along we went.

As the trail meandered around the north side of the mountain, the weather dropped a few degrees and there was green everywhere from the recent rains. It was pretty pleasant…. 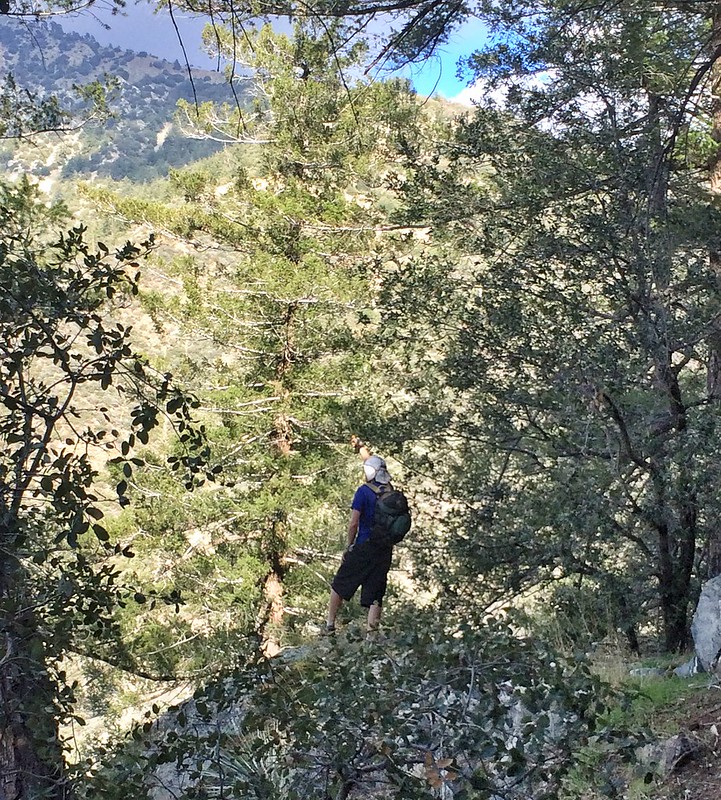 In no time we arrive at the infamous Allison mine. Although already exhausted, I felt giddy to explore it. Taco is not one for small enclosed places so he stayed behind. He warned me to make it quick because the sun was going to set soon and we needed to start rappelling while there was light. I basically went in and out of the upper and lower shafts and checked out the mining equipment before leaving Allison mine grudgingly behind.

Going inside the main shaft 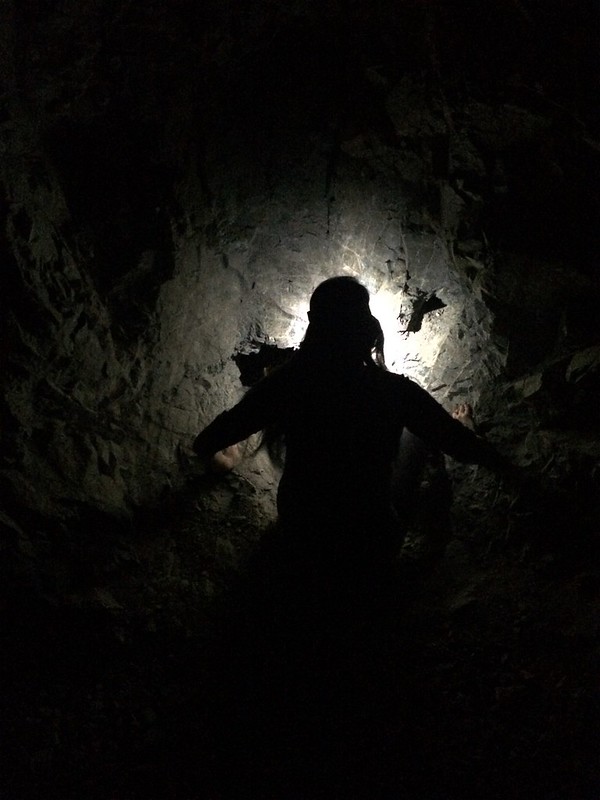 Checking out one of the tunnels 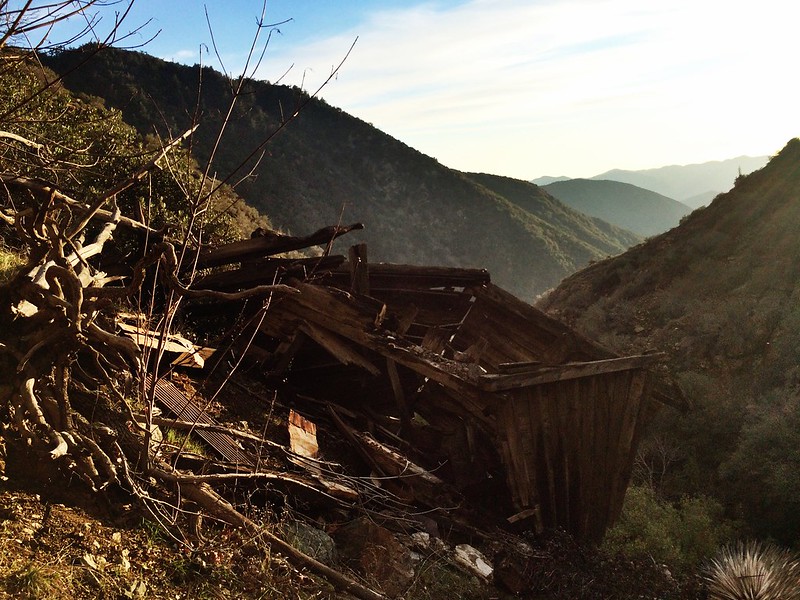 The daylight was quickly fleeting by the time we were rappelling down Allison gulch. We became stressed and pressed forward at the sudden realization at how very little time we had left for light. This was only my second time rappelling so to be hurried using equipment and techniques that I have very little experience using was difficult.

We were now in complete darkness.

Taco pulled and tugged at the rope but it just wouldn’t budge. This particular rappel was a two-stage rappel in which the first stage you land in a waist-deep pool and then descend another waterfall. So not only was it difficult to see where and how the rope was stuck, but it was a long ways up.

He couldn’t remember if there was any more rappels so he hiked down a bit to check and saw that we still had a grand 80ft fall to do, so without this rope we’d be stranded in the Gulch overnight.

Seeing that there was no other way around it, Taco made the decision to make Prusiks out of a double length nylon runner and anchor webbing so he could ascend back up and over to the anchor to undo the rope and pull cord that were twisted together.

By the time he fixed the ropes at the anchor and rappelled down we were highly relieved and didn’t care at all about how late it had gotten or how far we still had to go.

Doing the last rappel was the icing on the cake: it was an epic 80 ft waterfall. I had to concentrate on rappelling down this vertical drop with the distraction of a full flow on me in the dark. Some motivating shout-outs by Taco really helped me just relax into the insane moment and have fun.

After the last rappel and putting all the equipment away, we still needed about an hours worth of scrambling and bouldering to completely exit the Gulch and get to East Fork. This section took another level of patience as we wanted to finally be at the East Fork. From East Fork it was another hour of hiking and river crossing to reach the parking lot (around 12 am).

I love wilderness adventures but heading back down to the city in the warm car felt unbelievably forever good! Of course being a Type II fun adventure, it took some time to let the reward sink in of having reached Allison Mine!

I enjoy your postings. I visited the Allison mine before it was trashed.
There are some pictures here of what it looked like back in the day: https://flic.kr/s/aHsk5jXeiH

Wow!!! Thank you so very much for sharing these amazing photos! Were you the one that posted the YouTube 70s video of Allison mine? Man, there was so much more neat stuff to see untouched! Do you happen to know why they tore down the cabins? That’s too bad!

I hiked to the Allison Mine back in the sixties. From Allison Gulch there was a trail that took one directly to the mine. At that time there were two upright cabins,complete with furniture and furnishings. It looked like they just got up and left as there were dishes on the table.

Louie,
You are so lucky to have those memories forever. I would have loved to see a historical place of interest fully preserved.

Louie, I agree with Missy. They really started messing up this place after it was in one of those “treasure magazines. The first time I visited this place was in 1967 when I was working for the Forest Service. And you are correct, it looked like they just got up and left in a hurry. Several years later I returned and just about anything that could be hauled out was gone. I believe there were still about 8 ore carts still there. We were lucky to see it as fairly complete. Now I’m too old to climb back up there, so pictures will have to do. Happy Hiking BOB

Nice write up on the Allison Mine.
FYI All of John James Allison’s children, there were nine sons and daughters, were called up to work the mine. My grandfather was one of them, George D. Allison. I have the letter John James Allison wrote to his wife Emma telling her about the mine and how he needed to help work it. I also have two gold pans used at the mine.
The family abandoned the mine when they lost the gold vein because of a fault.

Wow that is seriously amazing!! Especially to be connected to one of the most famous mines in Los Angeles. Hold on to those very precious relics!

This is the ore drop structure sometime around 1980. It was still in pretty good shape. The other structures were pretty picked over by then. https://thumbwave.tumblr.com/post/8953671288/allison-mine-san-gabriel-mountains-ca-198081