Continuing on my quest to visit the fire lookouts of the Angeles, we decided to hit Warm Springs Mountain fire lookout off of Lake Hughes Road. I’ve had my eye on this former lookout because of the remaining steel structure that still stands. A hiker’s trail once existed to the peak, as mentioned in Jerry Schad’s Afoot and Afield, but the trail is long gone from what I gather from various blogs. Only a few write-ups exist on Warm Springs Mountain, most notably Valerie Norton’s Moments in Dirt and Ink. With there being no concise trail to the top, we opted for the trusty long fire road, 6.5 miles one way.

We parked at the intersection of Lake Hughes Road and Warm Springs Road, where a security guard peaked out of his trailer window to scrutinize us. I guess hes there to guard some private facility.  We then made our way to Forest Route 6N32 or Warm Springs Fish Canyon Truck trail. A mile or so in, there’s an abandoned campground where a mountain bike trail begins towards the saddle. Not knowing the condition of the trail, we stayed on the road. 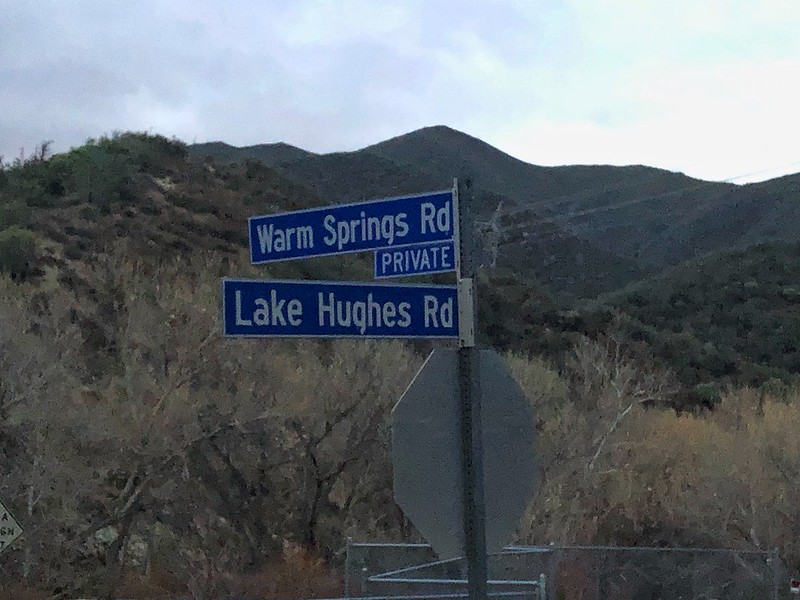 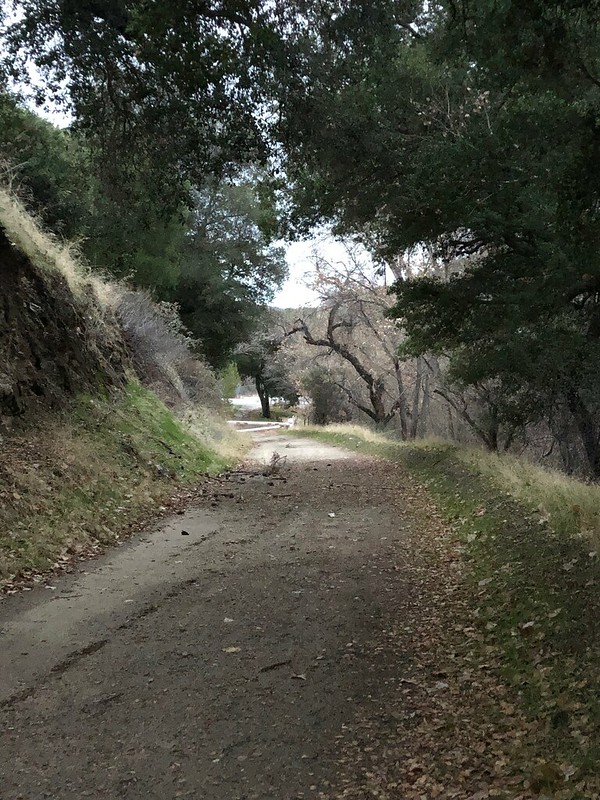 The road follows the the canyon creek for a little bit until is starts slowly ascending up the canyon. On the way we passed the remnants of a water tank and a shaft filled with water. Initially I thought it was a mine but looking at the map, there’s a spring symbol in that location so it might have been part of a spring foundation? I’m not sure, but it was neat to peer inside the flooded shaft. 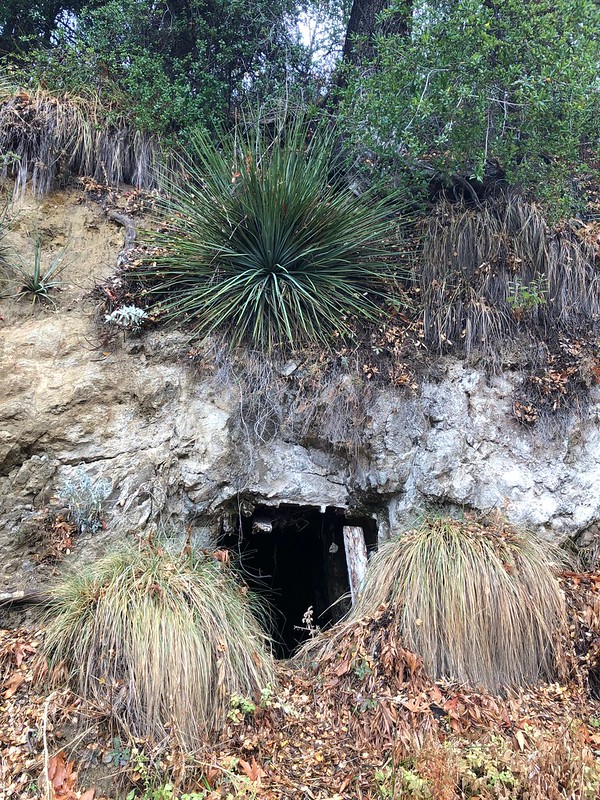 Passing a mine shaft looking thing 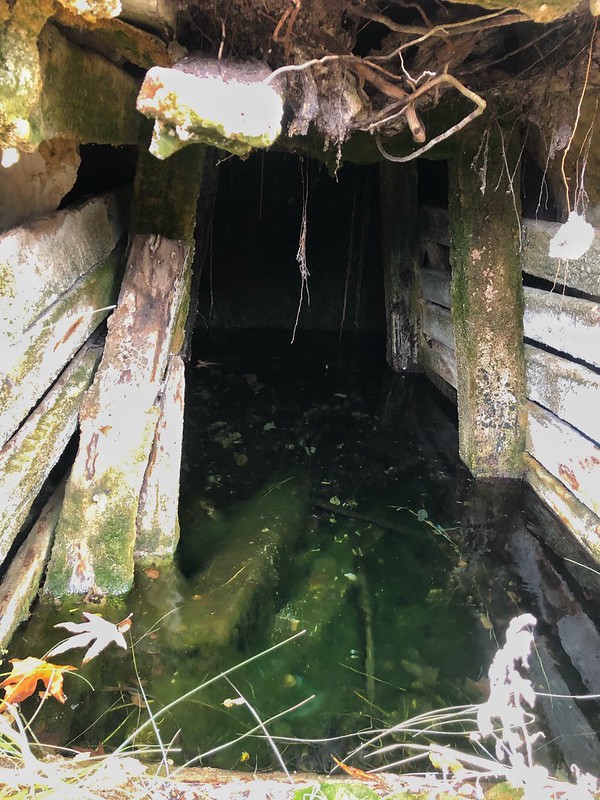 Inside the flooded shaft

Views really opened up at the first saddle where several roads converge and we turned south onto Warm Springs Divide Road (7N13). Forest Route 6N32 continues west along the East Fork of Fish canyon towards the former Cienega campground. Anyways, the Warm Springs Divide Road winds and gains elevation ever so slowly but eventually we came across a second open saddle with a wooden post “Warm Springs 024”. I’m not sure what that is referring to as the peak is still about a mile away. The steel structure of the fire lookout eventually comes into view. We thought about taking the firebreak up for half a second but I opted for the road since it has been awhile since my last long hike. 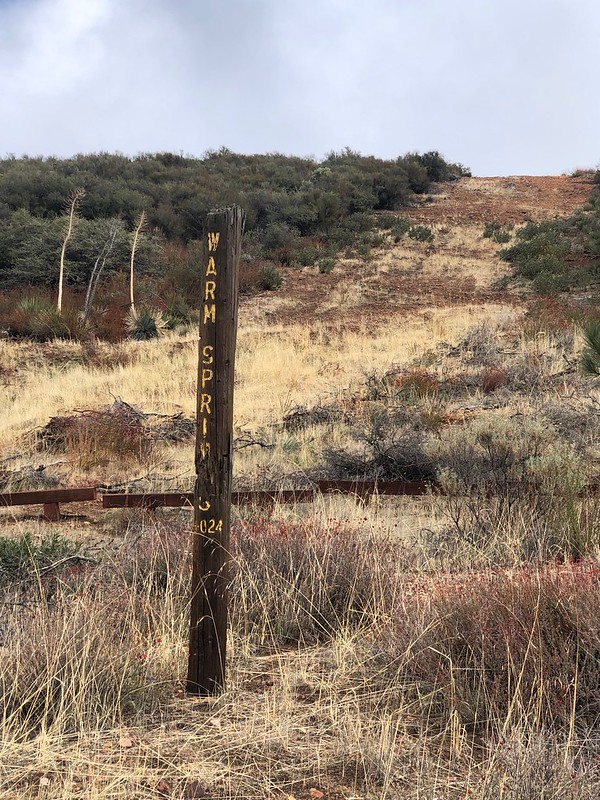 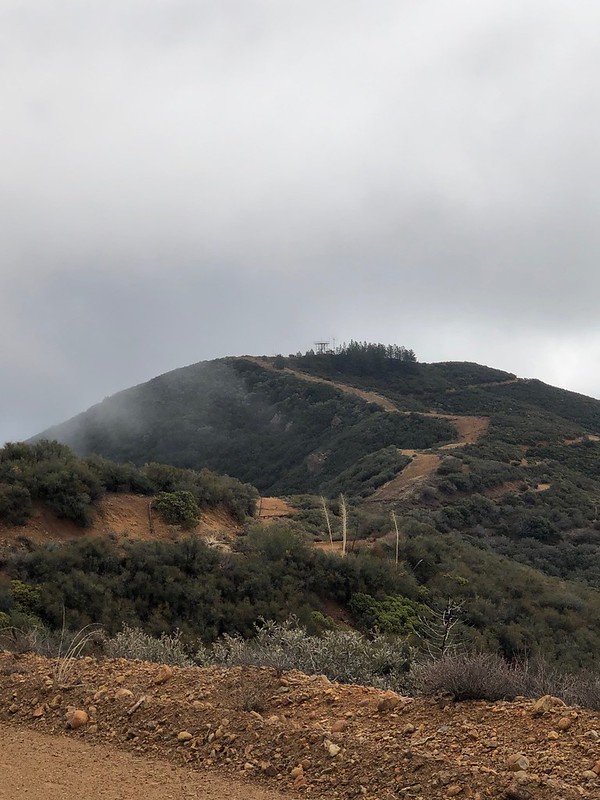 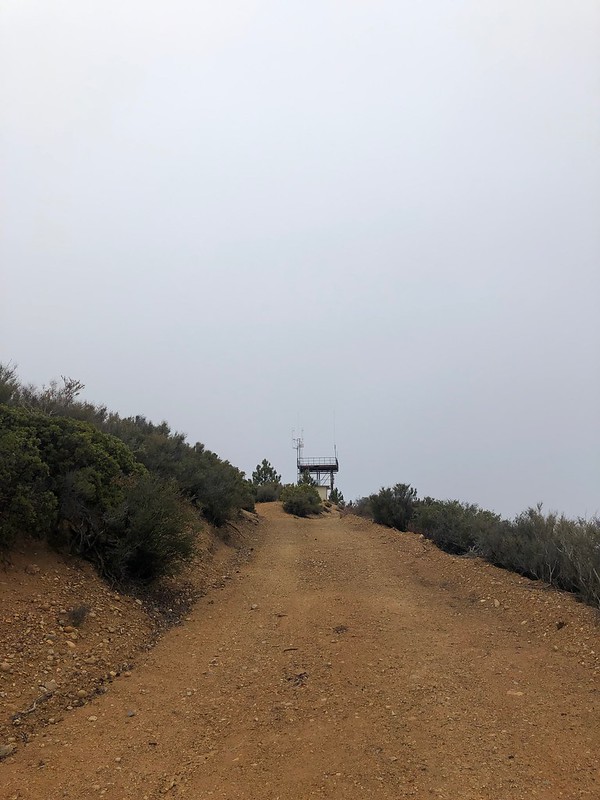 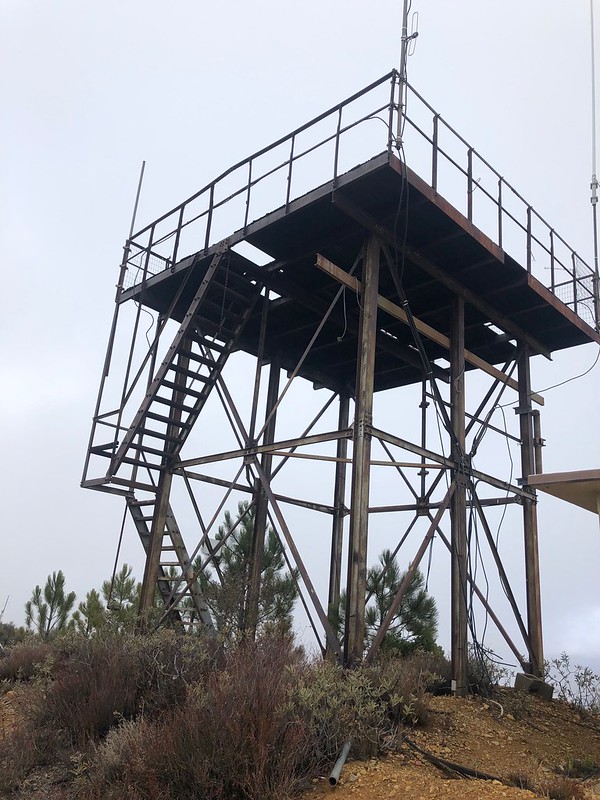 Warm Springs Mountain fire lookout was built in the 1930s. It appears its demise was in 1987 from the Ruby Ridge fire of Castaic lake, in which the tower cab was consumed but the steel tower remains today. At one point in time, the Angeles National Forest Fire Lookout Association (ANFFLA) had plans to restore this lookout but has since abandoned this project. The structure feels very unstable, has missing wooden planks, including the landing steps halfway up. There’s a Do Not Climb sign posted, and if you climb do so on your own risk. Years of wind and rain probably have deteriorated the frame so who knows when it will give out.

From the platform at the top the views are even more magnificent, rolling hills and clouds for miles, and we were even able to spot Castaic Lake and Bouquet Canyon Reservoir in the distance. I could see why a fire look out was built here. Theres a 1941 benchmark and a summit register under the tower. The register was placed in 2006. I was able to spot Bob Burd’s signature on the same page as Valerie Norton’s. Unsurprisingly, that day, in the usual Bob Burd fashion, he hit a string of multiple peaks throughout the western Angeles. 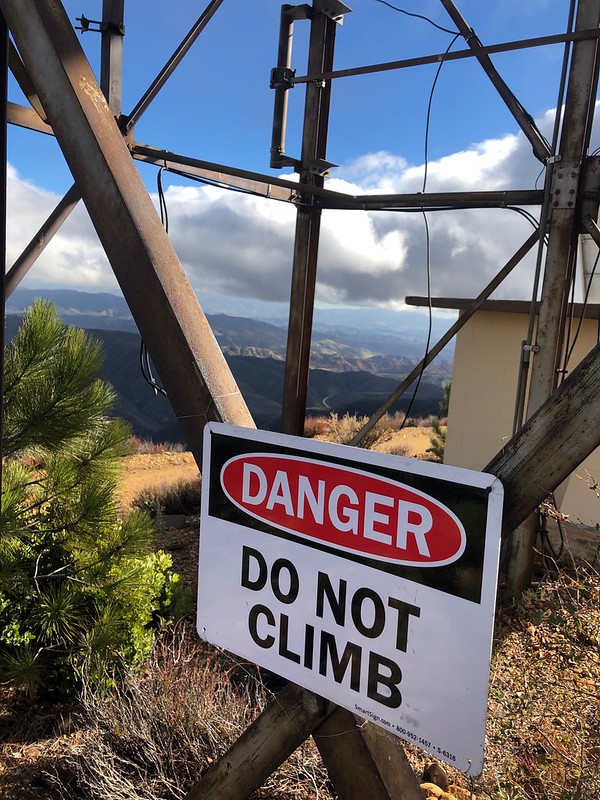 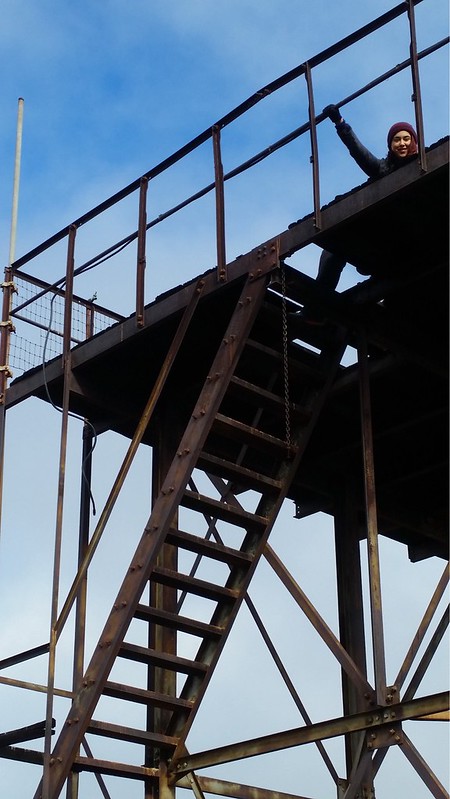 Been wanting to be up here for a long time! 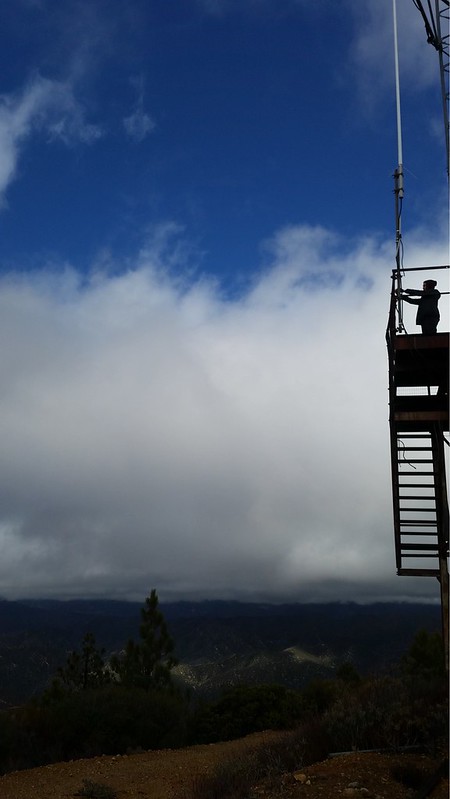 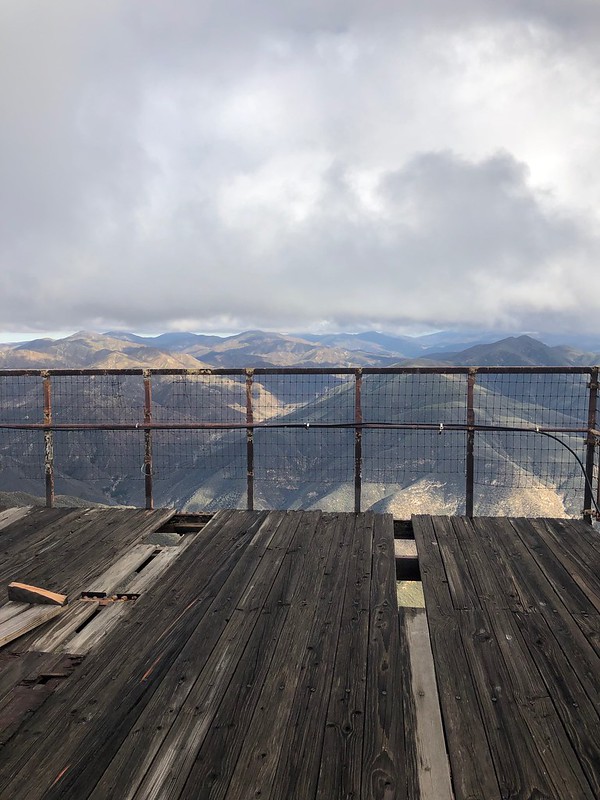 Looking out towards the Sierra Pelonas 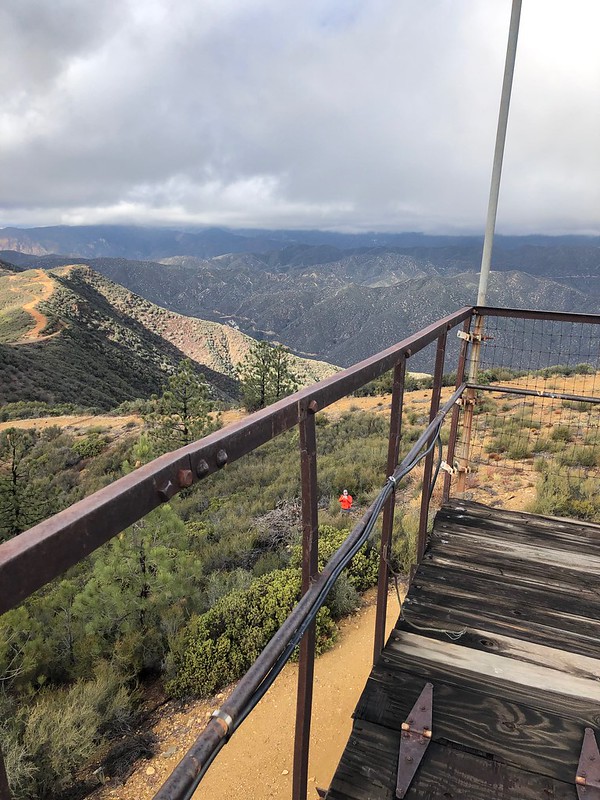 Jeremy at the bottom for scale 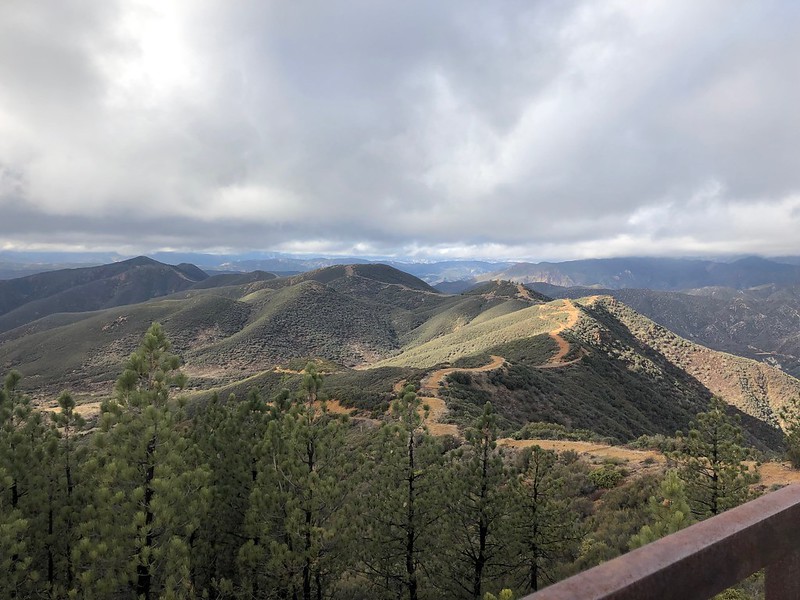 Rolling hills on a cloudy day, a grove of pines in the foreground 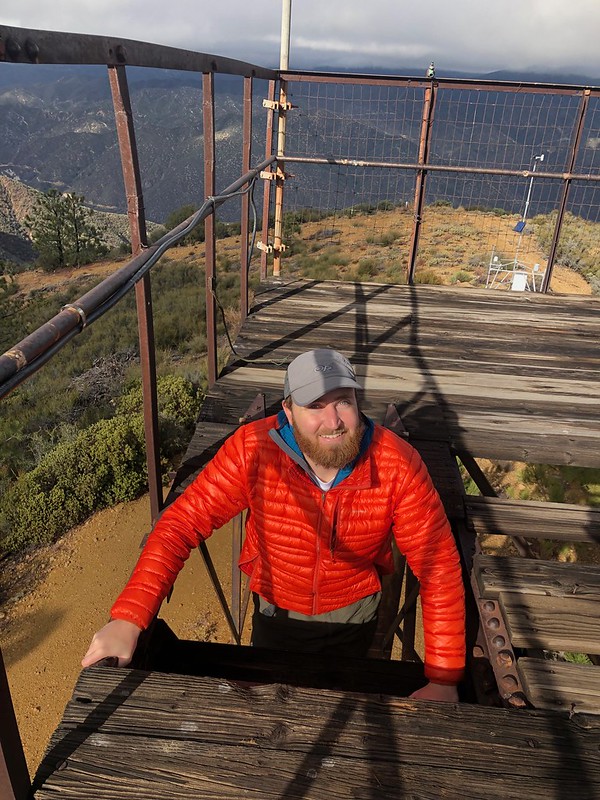 Jeremy popping up from the creaking stair case 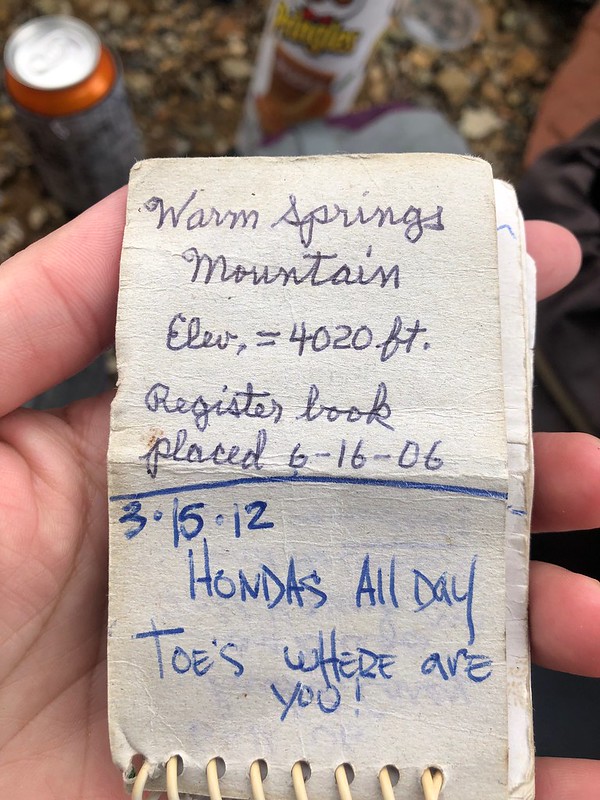 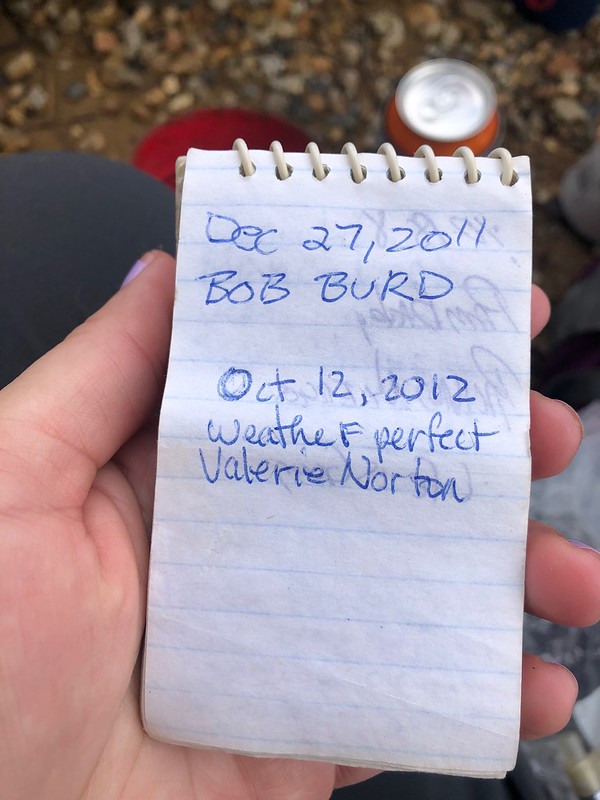 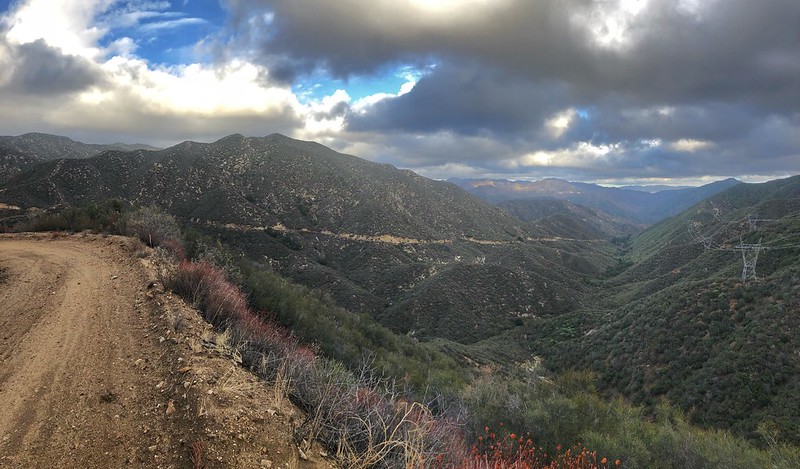 The road down Warm Springs Canyon

I was dreading the way down because of the entire visibility of the road from where we came, which seemed to stretch for eternity. But the sunset vistas and wonderful company made up for it. Plus, it looked farther than it felt given the fact that it was really just easy road walking.

I hoped to find a picture of the lookout in its glory days but found nothing. There’s a scant amount of history on the lookout. In the late 30’s and early 40’s Ramona Merwin worked both Warm Springs and Los Pinetos lookouts in the Saugus District as well as providing decades of service at Vetter. Ramona initially joined her husband, Arthur Merwin, in 1937 to staff the Warm Springs Mountain Lookout. After he passed away in 1952 (from lung cancer apparently having fought too many fires in his firefighting days), she was asked to work the Vetter lookout where she would remain for decades. 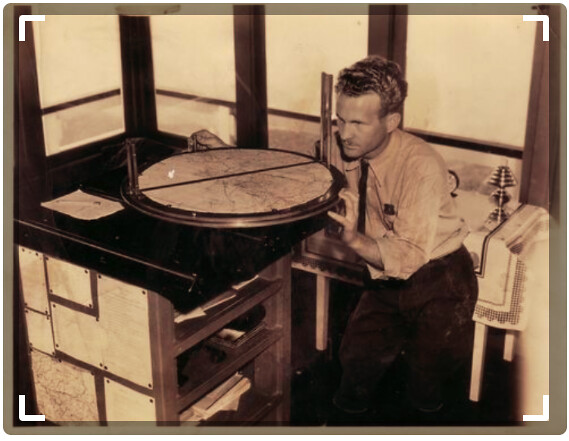 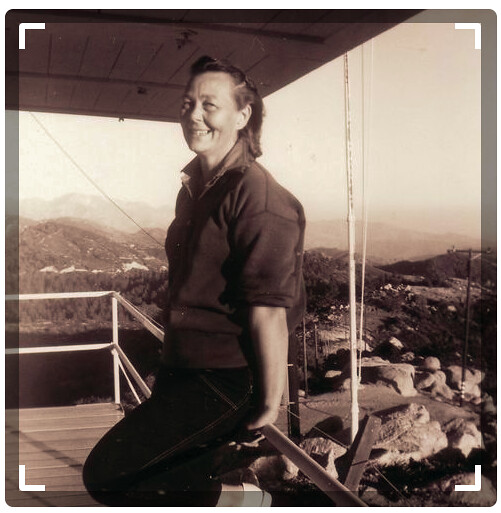 Warm Springs is listed as a thermal hot spring in a 1935 publication by the United States Department of the Interior called Thermal Springs of the United States. It describes the spring as caused by geologic subsidiary fracturing and is 90-100 degrees Fahrenheit. I don’t know if the spring is still there? Its worth checking out

So I have some unfinished business with the history surrounding the fire lookout and the camp facility. By having a (paid) Newspaper Account, I was able to retrieve some terrible-quality photocopies of how the former lookout once stood. 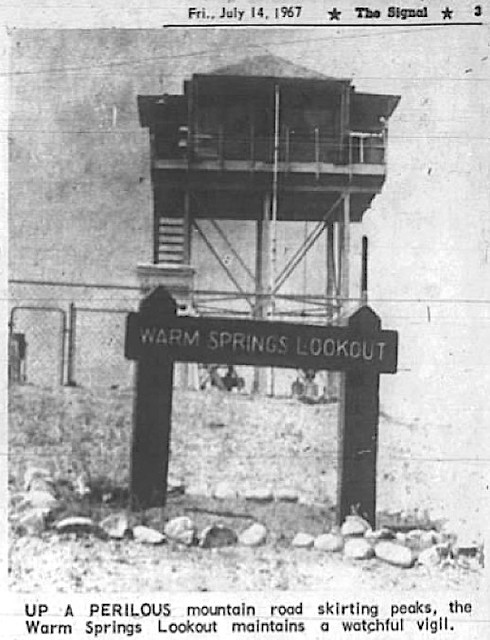 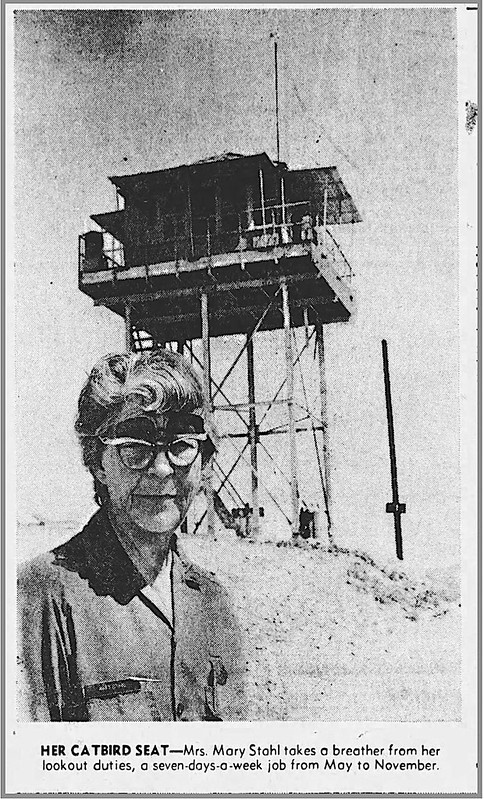 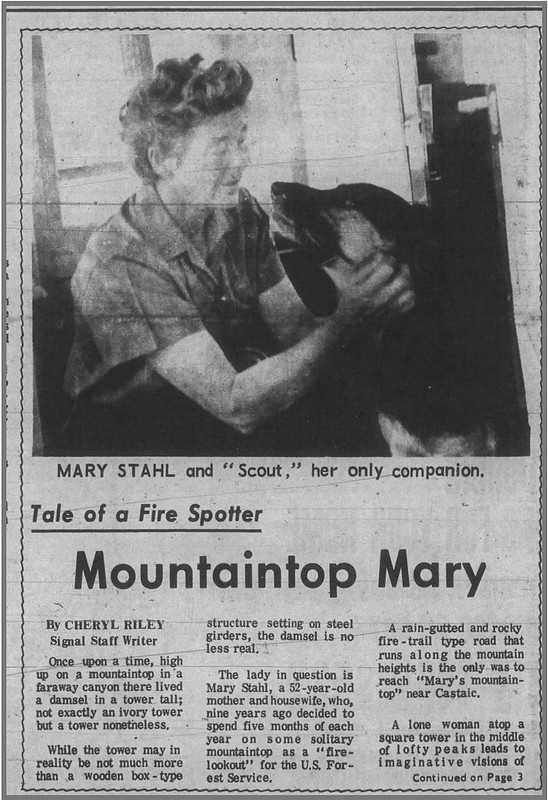 As for the camp and facilities: the warm springs were thought to have been used by early native inhabitants before it became privately owned and then taken over by LA county for a rehab. But I really couldn’t have put this in better words, this is from the LA Times (Feb 59):

“Warm Springs was opened for rehabilitation of needy men in 1942. Before that according to some sketchy history – and more than twice-told legends- it was a popular “health resort” for native Indians. They are said to have found certain healing qualities in the 90-deg. water that comes from the earth and which gave the camp its name and definite evidence of the Indians has been found in many burial mounds. Most Indian relics salvaged through the years were sent to a museum in Philadelphia. Now the Warm Springs (water is stored in a cement “blockhouse” and piped to a 40×90-ft swimming pool as a primary source of supply in case of a brush fire. The U.S. Forest Service has a lookout station just above the camp, which is in the Angeles National Forest. After the Indians disappeared, a portion of the present Warm Springs Camp became a combination health resort and club. Then came county ownership”

Louis Klein was the one who capitalized on the warm springs, he built a health spa and called it “Klein’s Radium Hot Springs!”

Fun fact: Around 1929, Klein was booked and charged for having alcohol on his premises (remember this was Prohibition from 1920 to 1933)! But he got off all charges (it helps to know somebody to know somebody.)

So around 1942, LA county took over the spa and turned it into a alcoholic rehabilitation center. What’s it status today? It looks like its still a rehab.

Demise: LA Times September 1987 reported the destruction of the lookout from the Ruby Fire: “None of those structures were damaged by the fire, but an unused 50-year-old U.S. Forest Service lookout tower at Warm Springs burned to the ground, officials said. The cause of the fire, which erupted Sunday morning, was under investigation”

Did you know Ramona Merwin? Mary Stahl? Or have old pictures of any of the Angeles Forest Lookouts? Please comment below or email me Missyisabell@gmail.com

This woman should get a job as a researcher! Thanks for great photos and all the history. Felt like I was asking on the home.

Oops. Need to proofread. Felt like I was along on the hike.

Haha thank papa Boggs! Your son has turned me on to the history of these mountains! It’s been a life changer.

Damn, great weather! Super informative on the deets. Too bad you didn’t stumbleupon some hidden springs! Next time, scuba gear for the mine shaft.