Sutton Canyon (East Fork Pickens Canyon), is an eastern tributary of Pickens Canyon. It descends the southern slopes of Mount Lukens in the front country and down La Crescenta Valley.  Temperatures swell up in the summers but theres usually water running in the lower reaches of the canyon. The adventure up Sutton canyon is broad, shaded and covered. After a good rain, theres stairs of cascades in this hidden wonderland. 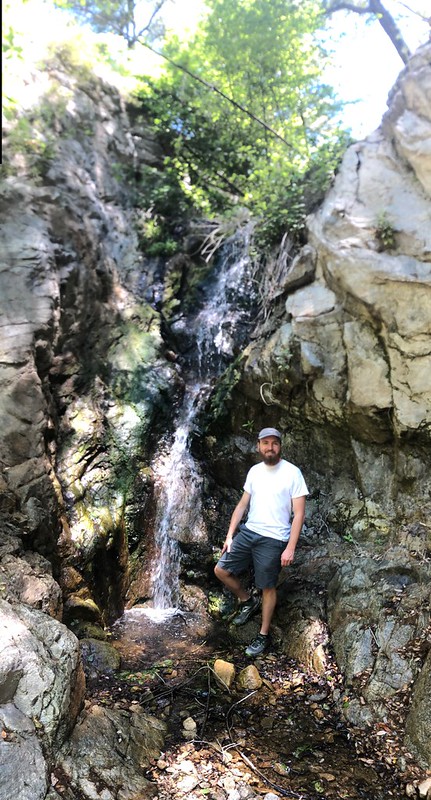 Park here and then take the rough trail that climbs down into Sutton/Pickens canyon from the roads end. The trail descends the canyon wall just upstream of a small flood-control dam (take note where to ascend back to exit the canyon).

Proceeding up the canyon you encounter Pickens Canyon to your left, so make sure to stay to the right and head up Sutton Canyon. It is only a few hundred yards to the end of the canyon’s beautiful waterfall. 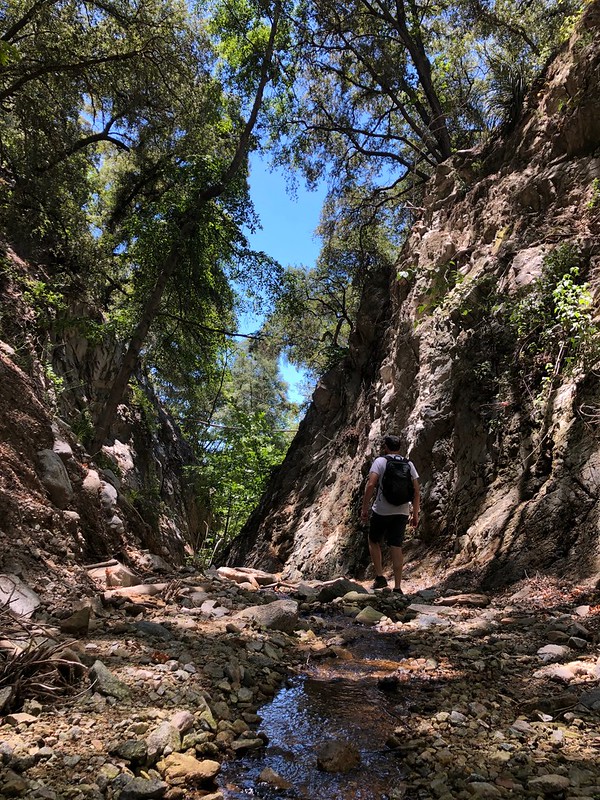 A wonderful oasis, some remnants of old piping can be found here 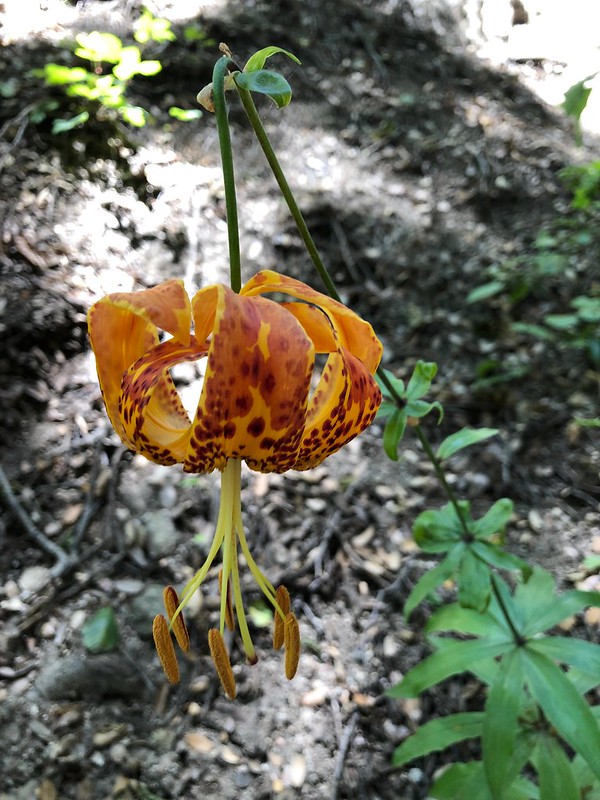 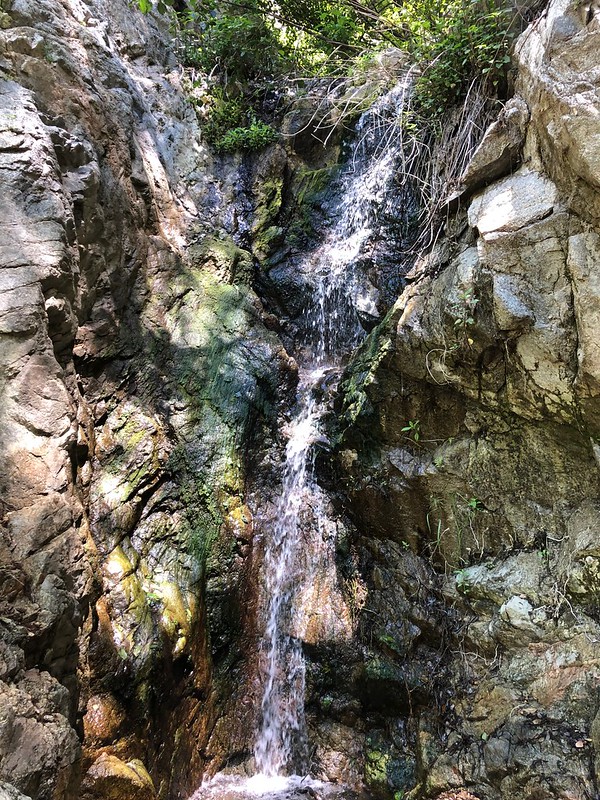 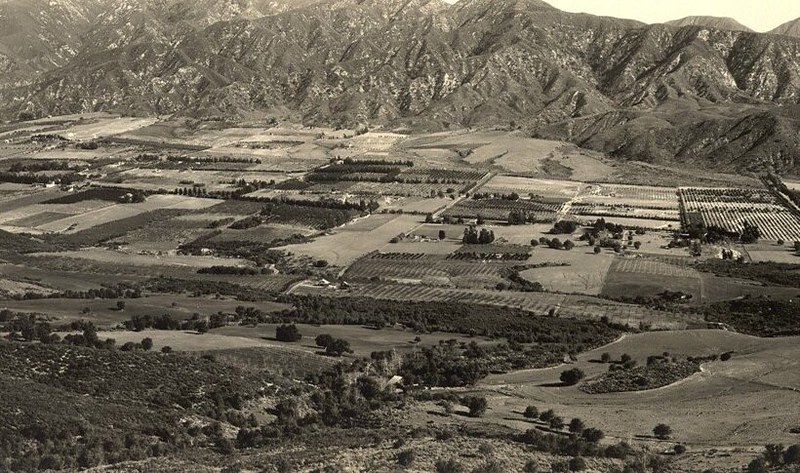 The Crescenta Valley, circa 1907. Looking northwest toward the San Gabriel Mountains

The only source of water in La Cañada for the early settlers was from streams flowing down the canyons of the San Gabriel Mountains. In 1892, the La Cañada Water Company was formed, which collected water from Pickens Canyon and surrounding canyons. Tunnels, and pipes were constructed while rock check dams were also built for the stormy days. 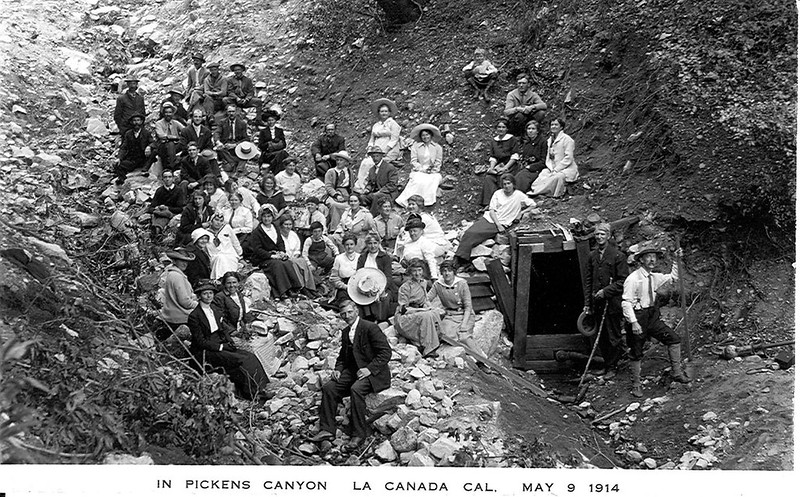 This photo from 1914 shows a community outing near one of the water tunnels. 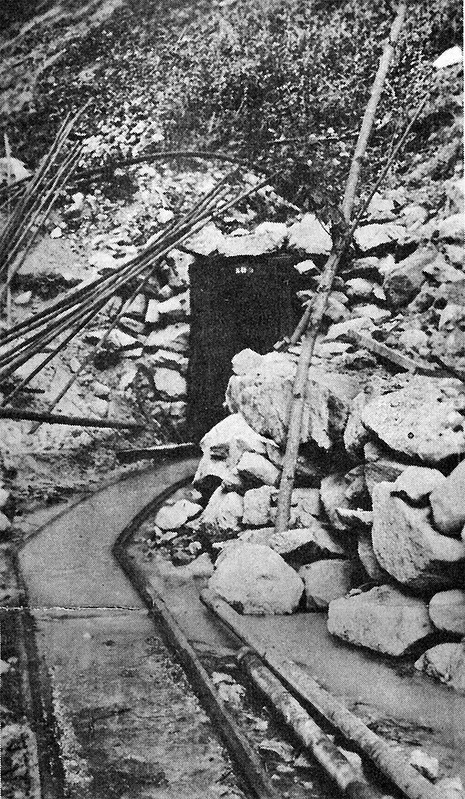 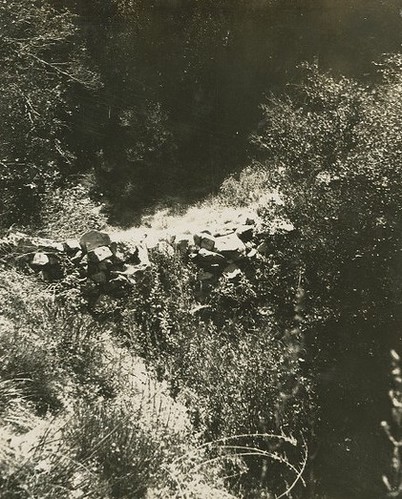 A typical check dam in use in the canyons back of La Crescenta Collection: Ventura County, UC Cooperative Extension Records

Wildfires above the Crescenta Valley in November 1933 and subsequent heavy rain in December 1933 produced the perfect conditions for a massive flood. Just after midnight on January 1, 1934, millions of tons of mud and debris traveled from the mountains down to the Verdugo Wash, killing many people and destroying about 400 homes in the communities of La Canada, La Crescenta, Montrose and Tujunga. Hundreds were left homeless, entire families were wiped out. The reported property damage exceeded $5,000,000, and more than 40 lives were lost. 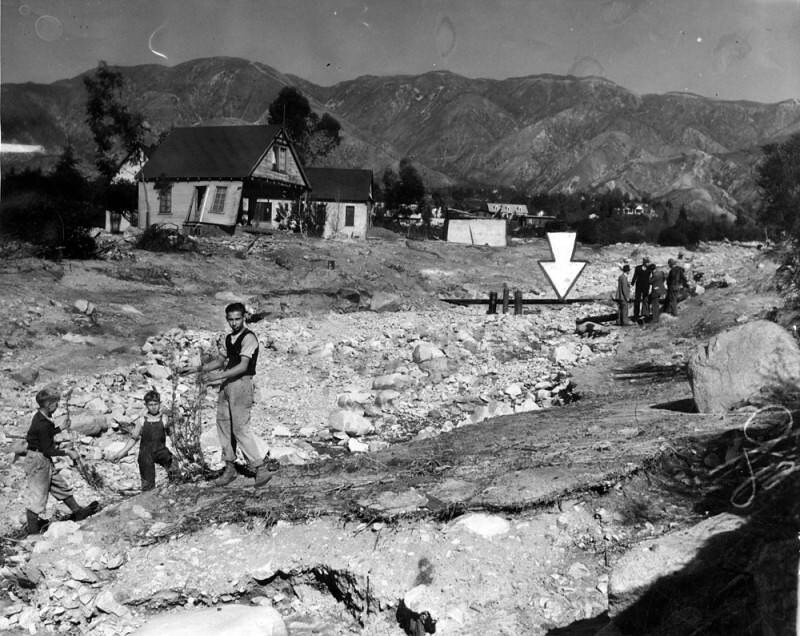 After great quantities of debris piled up behind small check dams and water pipes crossing Pickens canyon, the dams and pipes gave way under the heavy pressure. Wall after wall of water was sent down the canyon. The arrow points out one of the pipes. A few feet back of it was a check dam, five and a half feet high, which also was broken. In the foreground are boys holding some wire that was part of the dam structure. Credit: Los Angeles Public Library 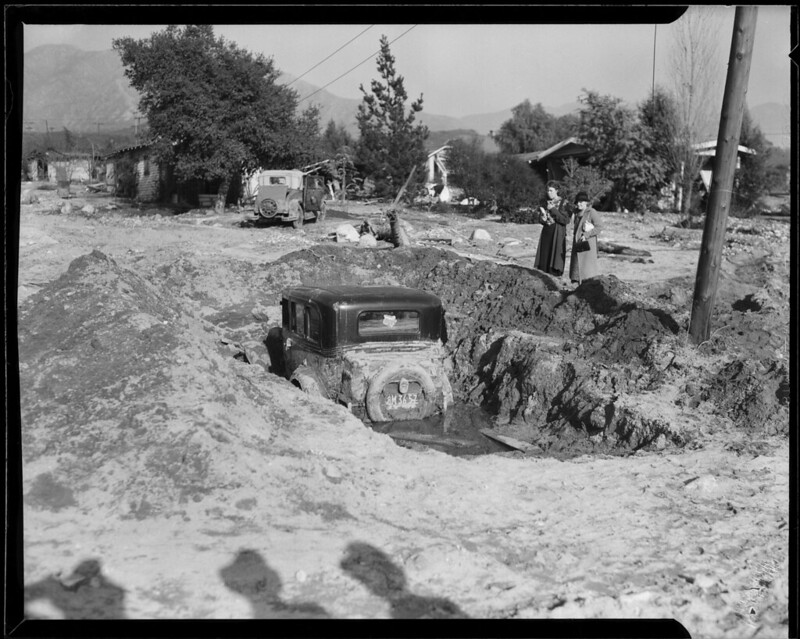 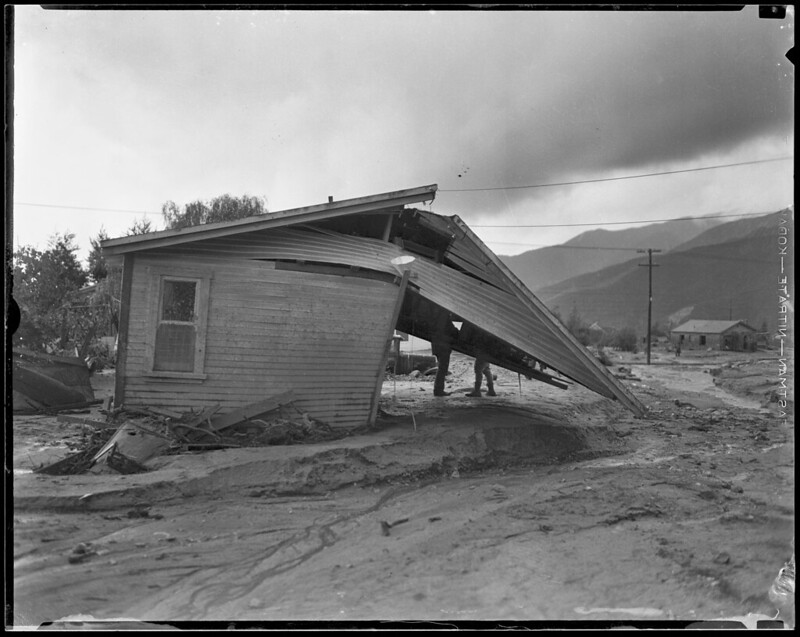 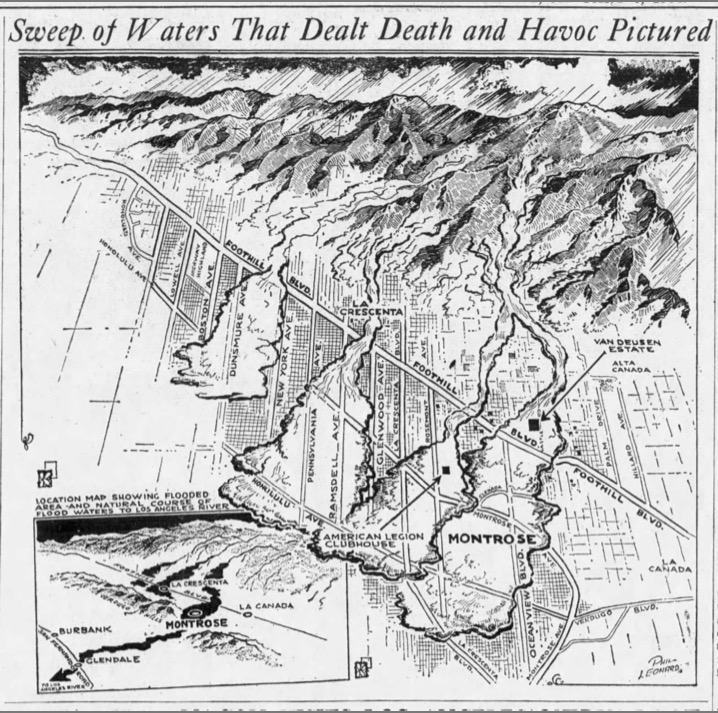 Map of flood from the canyons into the Valley floor. The Los Angeles Times 6 Jan 1934

After the disastrous flood of 1934, the U.S. Army Corps of Engineers and the Los Angeles County Flood Control District embarked upon a major construction of dams, channels, debris basins and continued efforts to control erosion. Today, debris basins line the foothills of the mountains and other ranges in the region, protecting downstream neighborhoods from another New Years Flood disaster. La Crescenta Valley continues to thrive and become versed with the San Gabriel Mountains 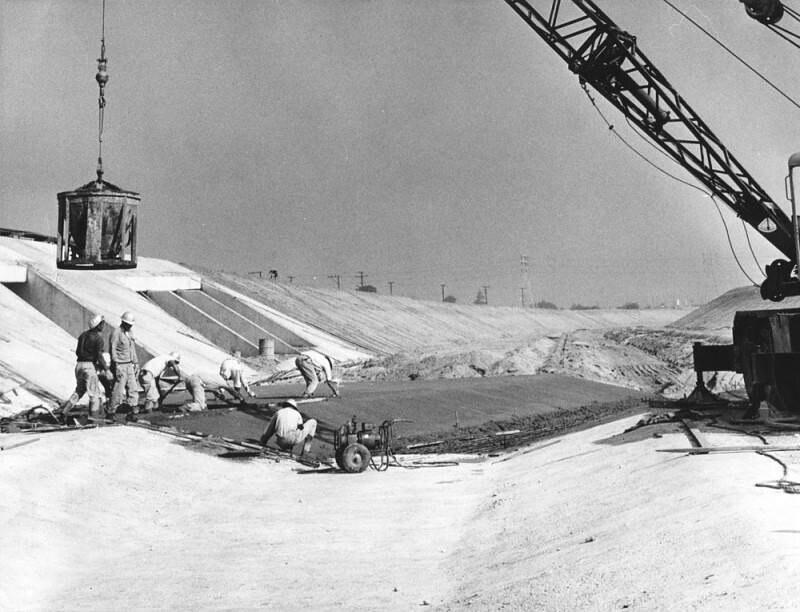 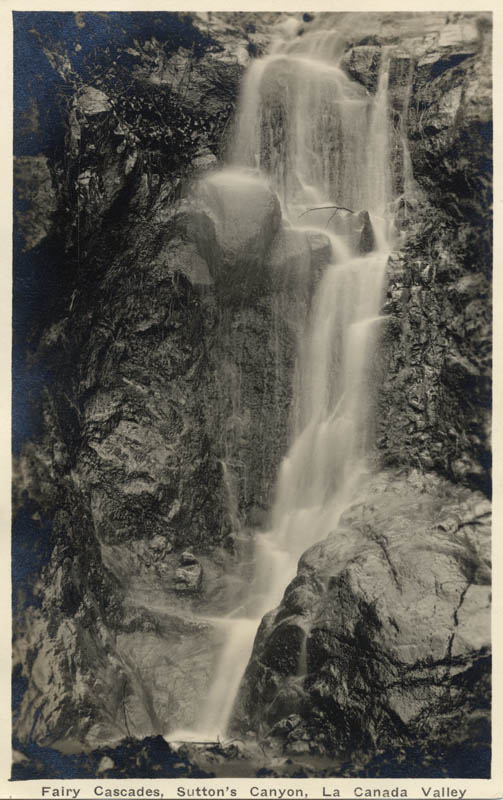 any problems with the neighbors as you embarked on this hike?