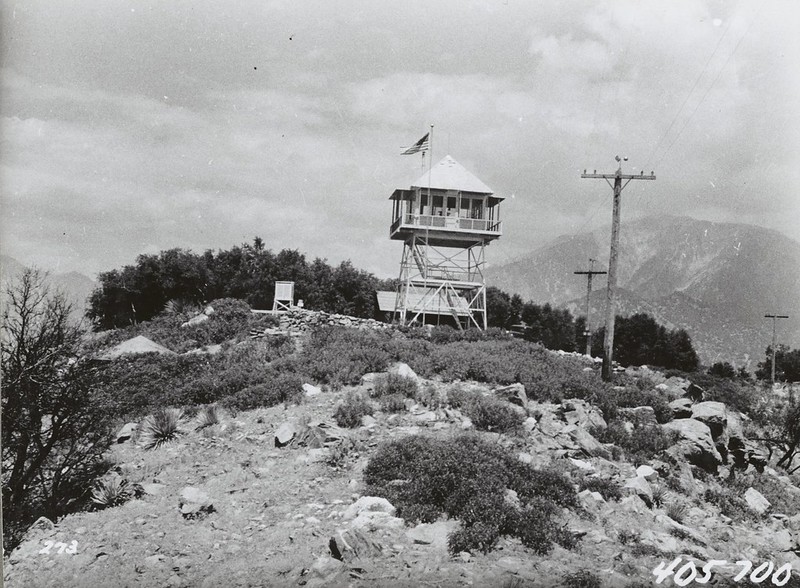 Located near San Antonio Canyon, Sunset Peak offers sweeping views of both the mountains and the cities below. To the north, Mt. Baldy, the 3 Ts and Lookout Mountain dominate the view. The peak was named in the 1920’s by hikers from nearby Camp Baldy for its proximity to the old “Sunset Trail” which passed just below this summit and connected their resort with Brown’s Flat. Assumably, so named because it was deemed the best local spot to enjoy the sunset.

Sunset Peak once hosted a fire lookout from 1927-1975. In 1914 the San Antonio Fruit Exchange and the forest service planned to build the first fire lookout tower in the Angeles National Forest at Sunset Peak. However, Lookout Mountain (Old Baldy) was chosen as the first location (1914-27). In 1927, the former Old Baldy lookout tower was unfit to be used any longer so it was removed to Sunset Peak. 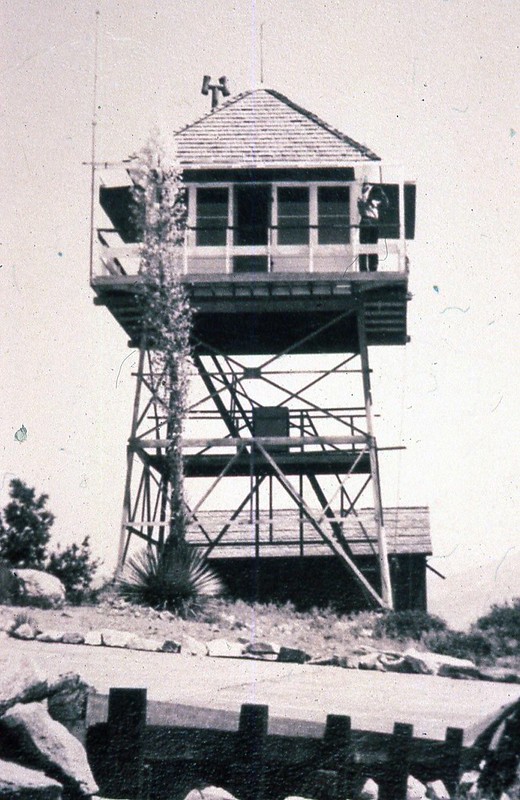 During its first official season in 1928, lightning destroyed the lookout and cabin, leaving only the steel tower. Charles E. Horn and his wife were stationed at the lookout during the storm but they escaped uninjured. The fire lookout was quickly rebuilt because of its advantageous views of the watersheds and surrounding mountains. It was constructed as a 20′ K,X-B type tower with a 14′ by 14′ cab.

For the first time in 1932, supplies for Sunset Peak Lookout were taken up by motor, the Glendora Ridge Road having been just completed. Previously, pack trains carried up all supplies. 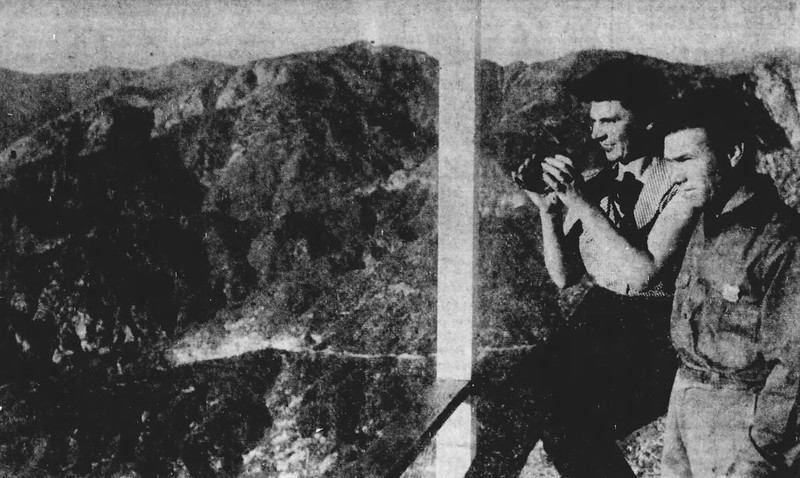 Ed and Lillian Smith at their tower house atop Sunset Peak. The Pomona Progress Bulletin, December 1956 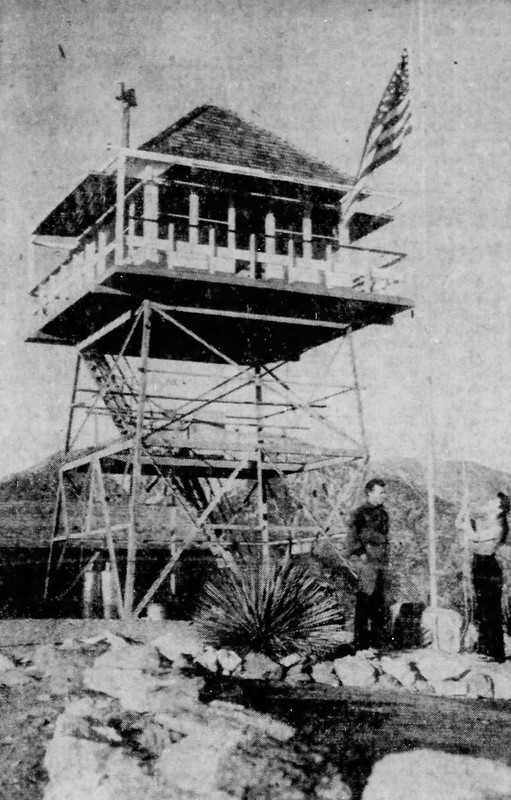 Ed and Lillian Smith lower flag at sunset in front of their tower house atop Sunset Peak. The Pomona Progress Bulletin, December 1956 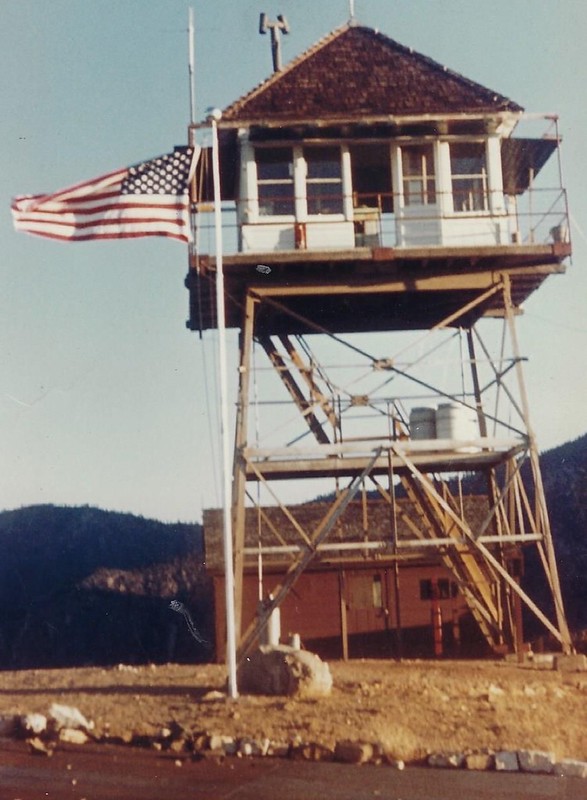 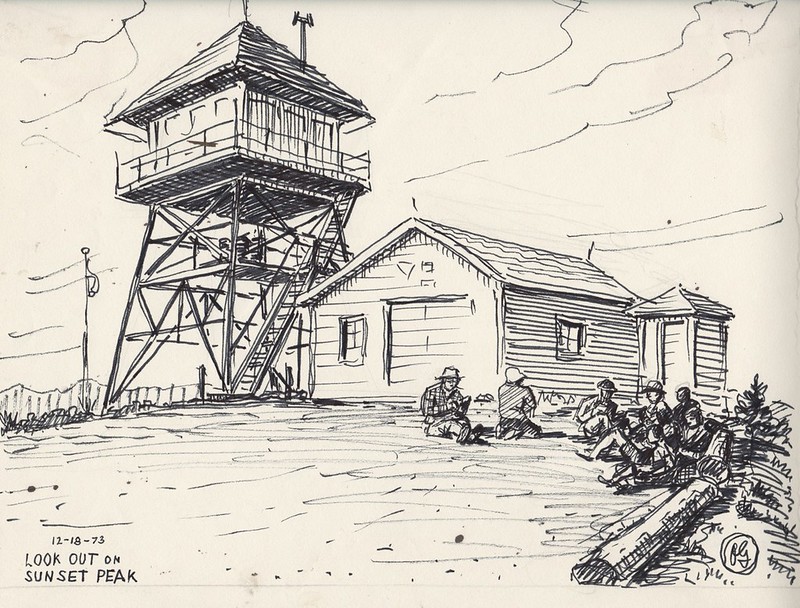 Sunset Peak lookout served in fire detection continuously except for the late 1940s because of a slash in forest service budgets. However, by the 1970s, the lookout was no longer in use due to lack of visibility. Smog would roll in about mid-morning, reducing visibility by 50% and by 2pm the front country, containing valuable water sheds, would be totally lost from view. Only one or two first reports of mountain fires from the lookout had been made for several years and most of these towards the higher north country. By the time smoke from a mountain fire had penetrated the thick layer of smog, the fire would have already been reported. 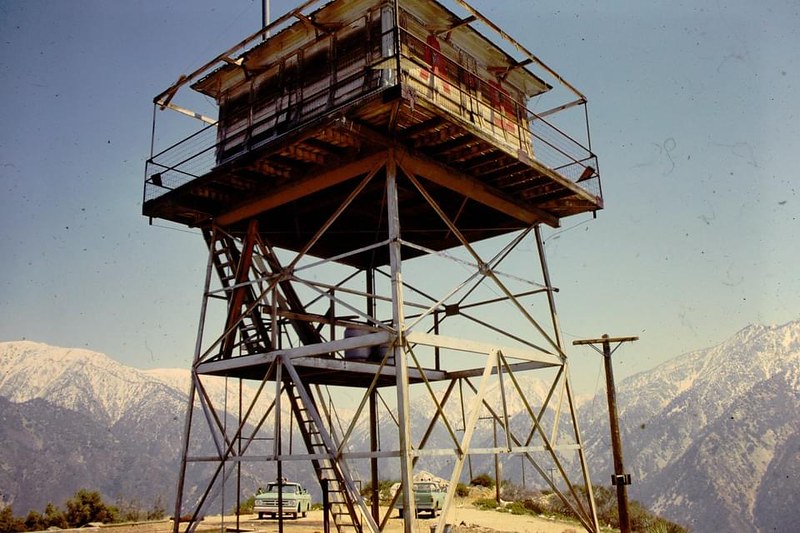 The abandoned tower before being taken apart around June of 1975. Photo by Gordon Rowley 1975. 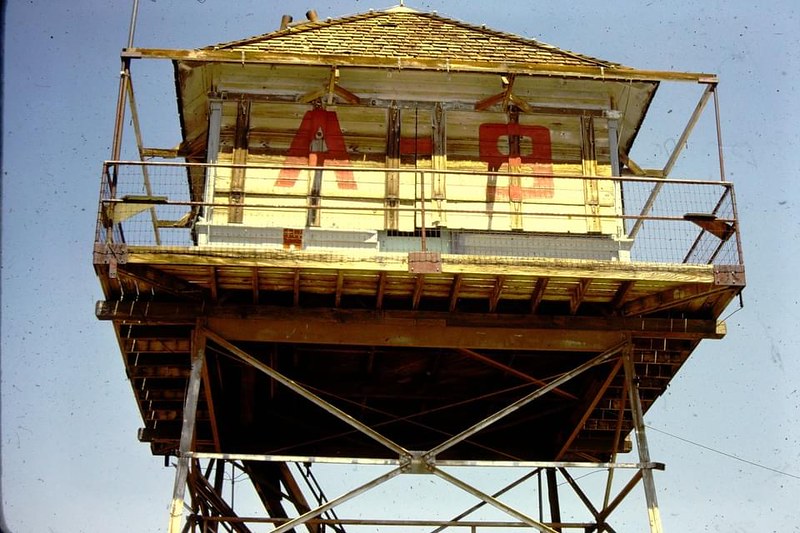 The tower as it looked in 1975. Photo by Gordon Rowley 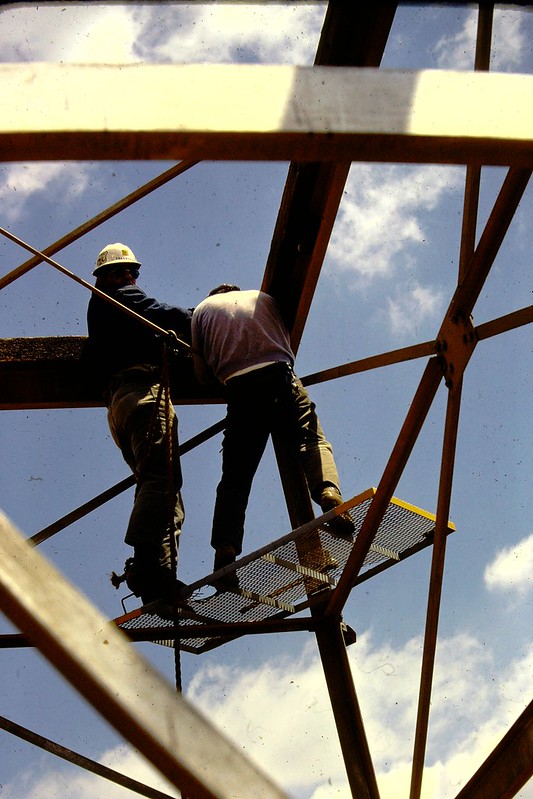 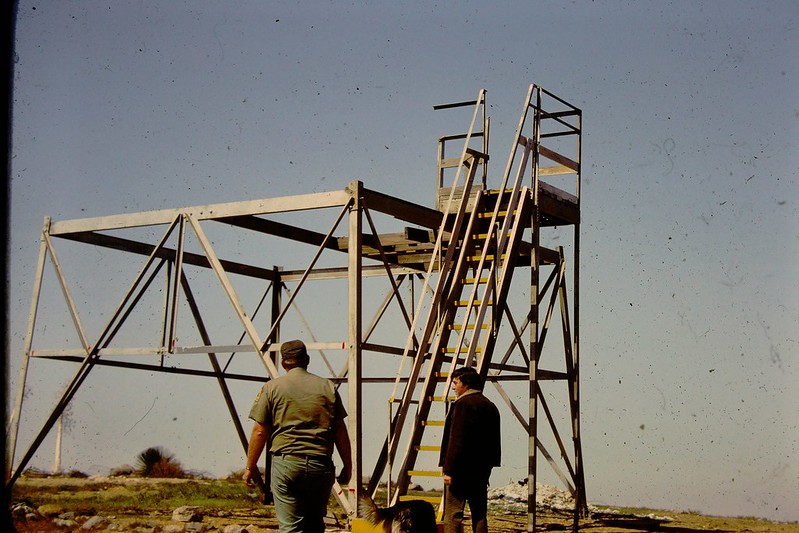 Sunset Peak tower being dismantled in 1975 with its cab removed. Photo by Gordon Rowley 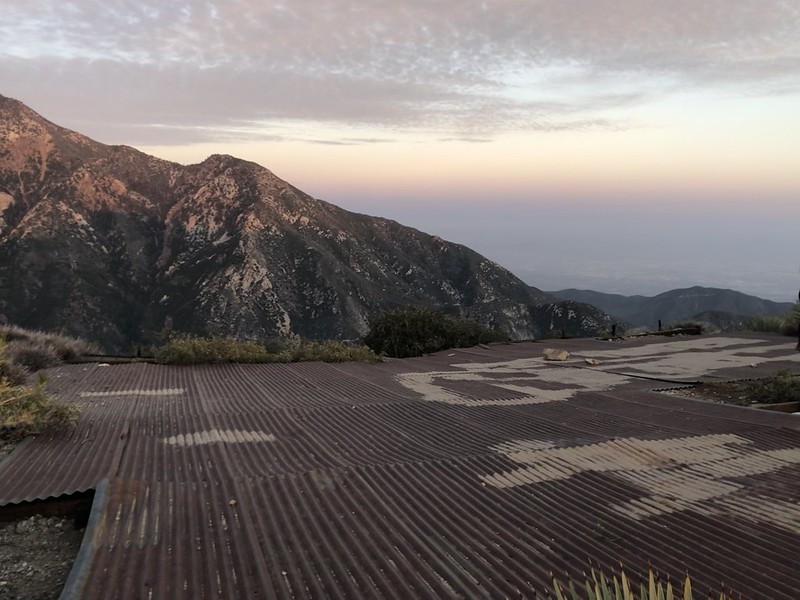 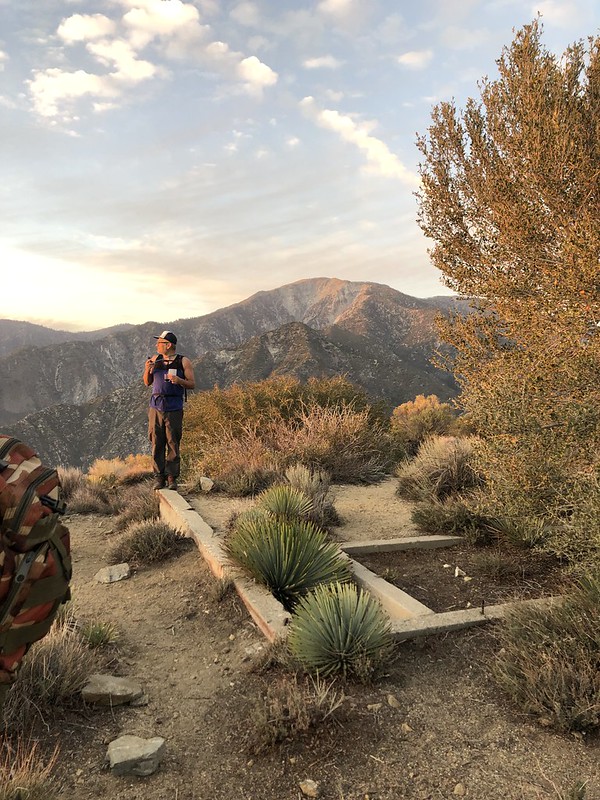 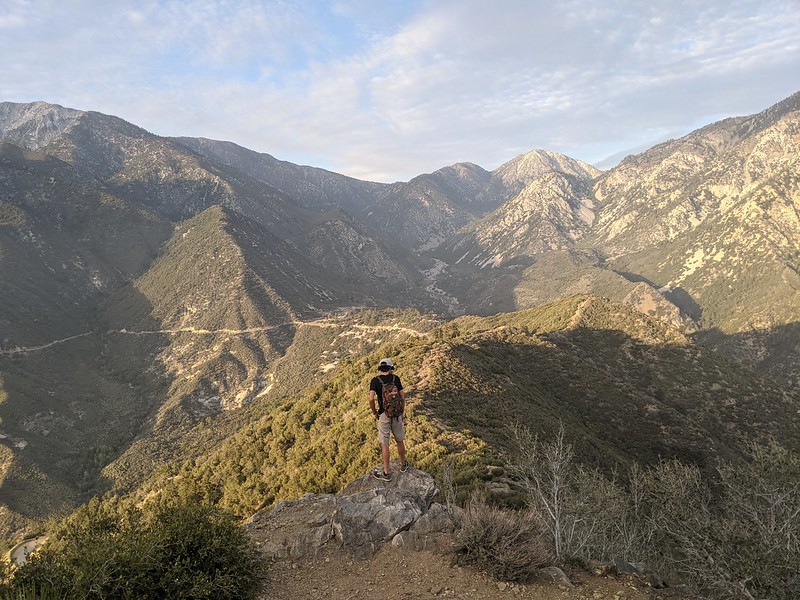 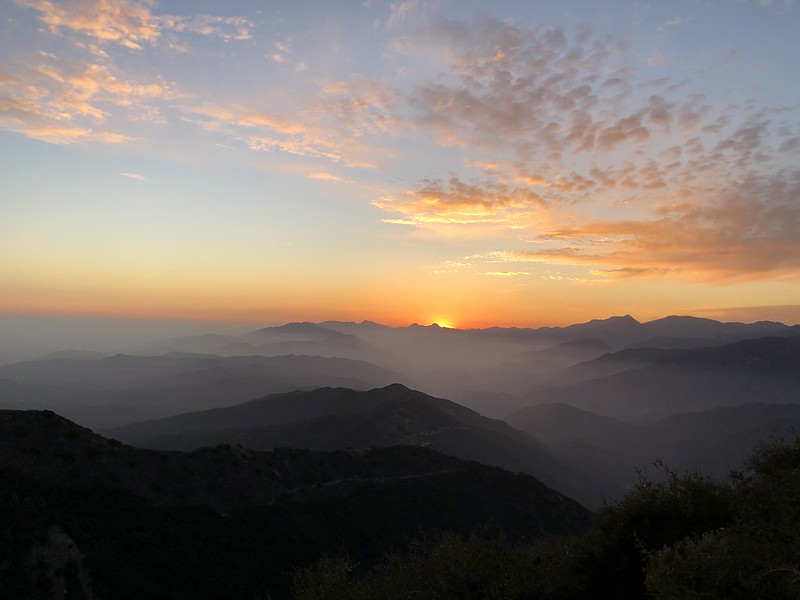 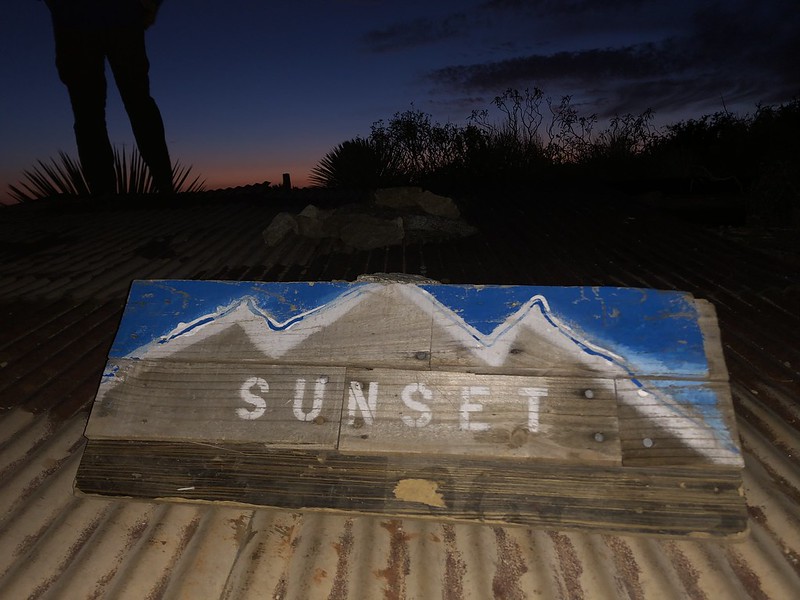 One of many signs that litter the peak 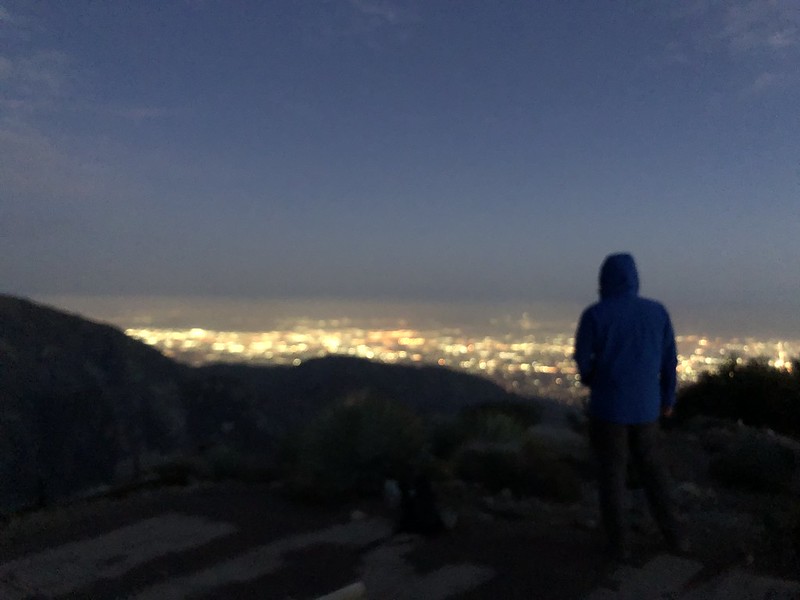 Just past sunset the sprawling city lights below

More wonderful work. I’d not seen all of Gordon’s slides, only a few. Great to have so many of the lookouts names! I’d asked Ontario Airport if they had any photos of the tanker base (and presumably the building) but no response. Lastly we think the corrugated sheets may have covered a cistern?

Yes I had read about the Ontario Airport relocation but couldn’t find any confirmation. Would be curious to see photos. Thanks for reading!