Wilbur “Sturde” Sturtevant (1841- 1910) pioneered more miles of trails than anyone else in the San Gabriels. In 1893 he founded his popular Sturtevant’s Camp in Big Santa Anita Canyon. The Great Hiking Era spawned a high demand of mountain-related activities and Sturde was one of the most knowledgeable of the range. He served as a mountain guide, trail builder, resort manager and stable operator. 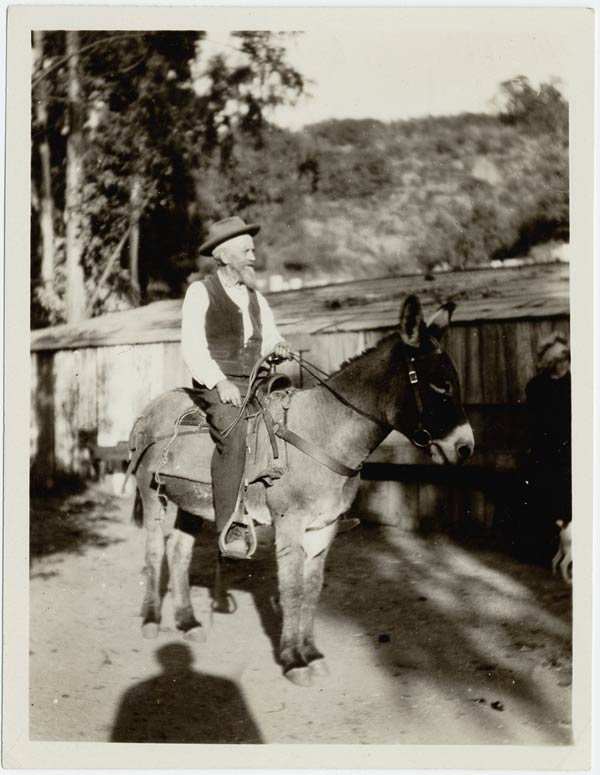 Wilbur M. Sturtevant on a burro at his stables, 1905. The Sierra Madre Historical Archives Collection. 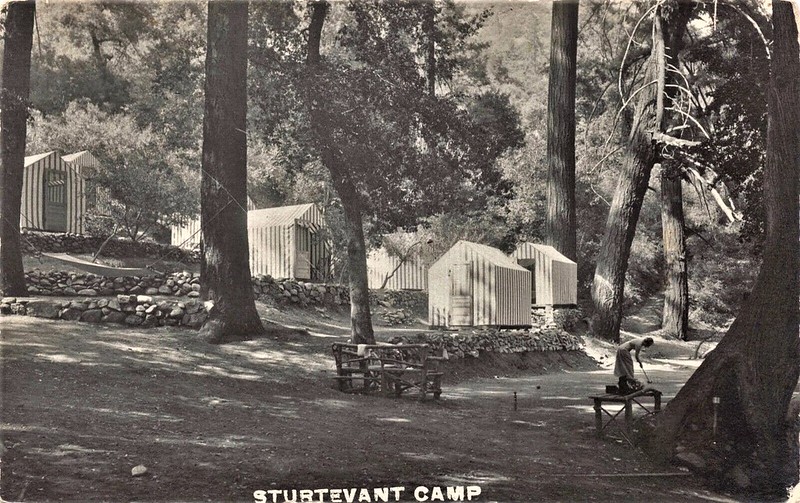 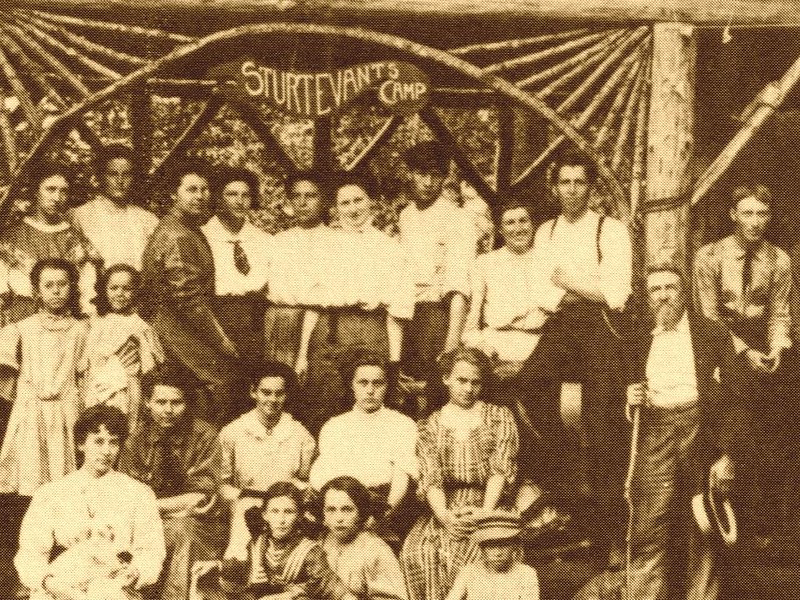 Wilbur Sturtevant (with walking stick) and guests pose in front of the Swiss Dining Hall shortly after its completion. Courtesy of the Sturtevant Camp FB page

Originally a Civil War Veteran from Ohio, Sturde left his family to search for gold out west. He found himself in Acton and eventually the San Gabriels. He built a name for himself with establishing his famous resort. Years later, Sturde’s family back east caught wind of his whereabouts. They moved to Sierra Madre to reunite with him, which would cause him misery:

His religious and strong-willed wife and daughters immediately set out for California to join him. They settled in Sierra Madre and proceeded to “reform” Wilbur and convert him to their brand of Christianity. Never was a husband so henpecked.John Robinson The San Gabriels 1991

The persistent family preachings and “a nagging wife” eventually sent him spiraling down into a life of alcoholism.

In one of his many backcountry explorations, Sturde discovered the beauty of the verdant high country in the notch between Twin Peaks and Mount Waterman. He decided to build a secluded hideaway in a glade surrounded by pines and supplied by a small spring. In this retreat, he found solitude and peace from his life pressures. He drank his bottled spirits and prospected for gold in the surrounding slopes. In his later years, he increasingly visited his mountain retreat just to drink. 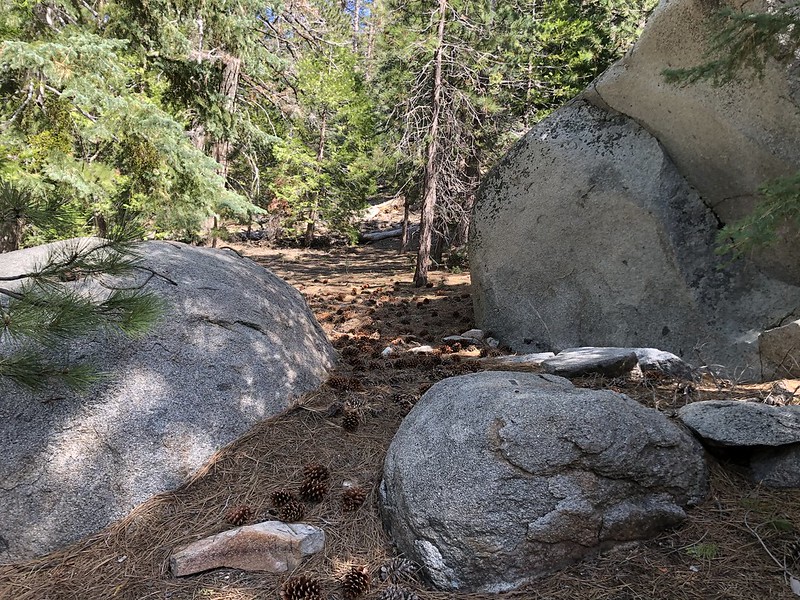 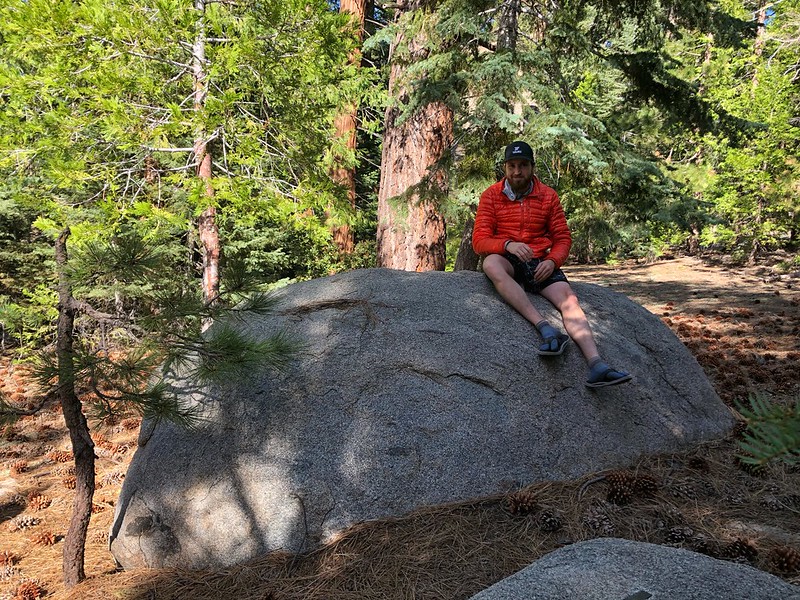 Jeremy sitting on one of Sturde’s boulders

His good friend, Louie Newcomb lived in a cabin in nearby Chilao and would often worry about Sturtevant over in his Twin Peaks saddle retreat, alone with his bottles of spirits. So every morning, Newcomb would climb a ridge behind his cabin to check for the smoke of Sturtevant’s breakfast fire. If there was no smoke, Newcomb would rush over to the saddle to make sure Sturde was ok (or still alive). However, Sturde would just be oversleeping from a long night of drinking.

Wilbur Sturtevant passed away at 69 years old. His legacy is memorialized in the surviving historic Sturtevant Camp, Sturtevant Trail, and Sturtevant Falls. 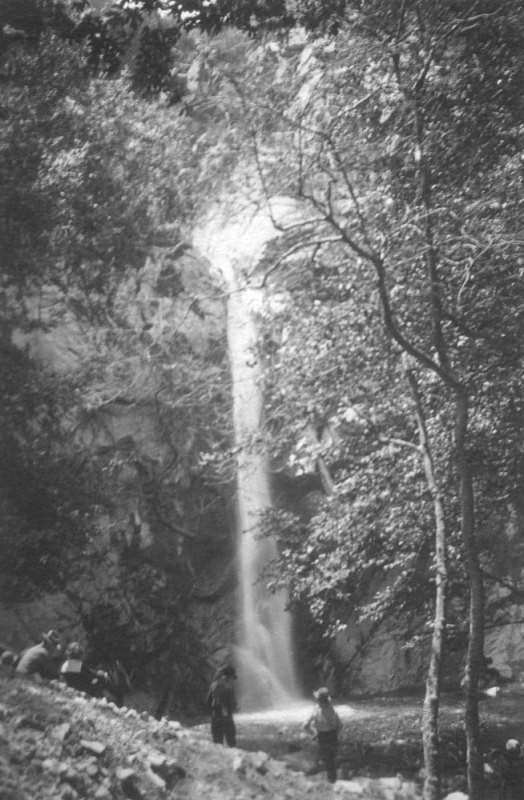 Today with diligent detective work, you can visit Sturde’s secret hideaway at Twin Peaks Saddle. But be sure to enjoy the stunning high country vistas, the singing streams, delightful pines and the gentle grassy slopes. 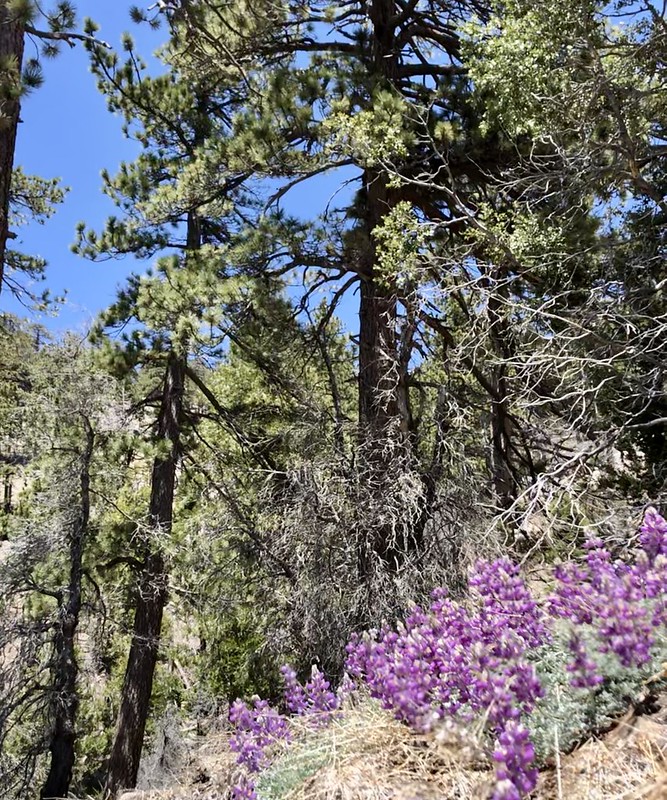 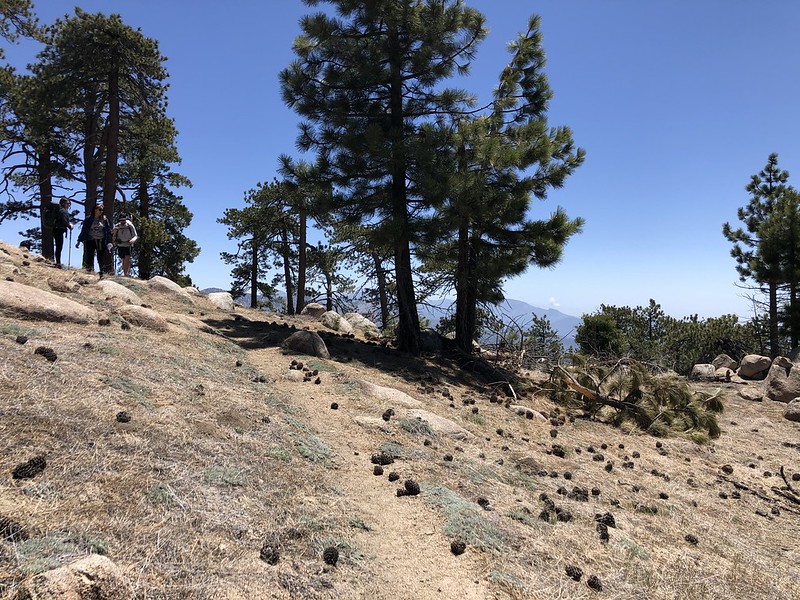 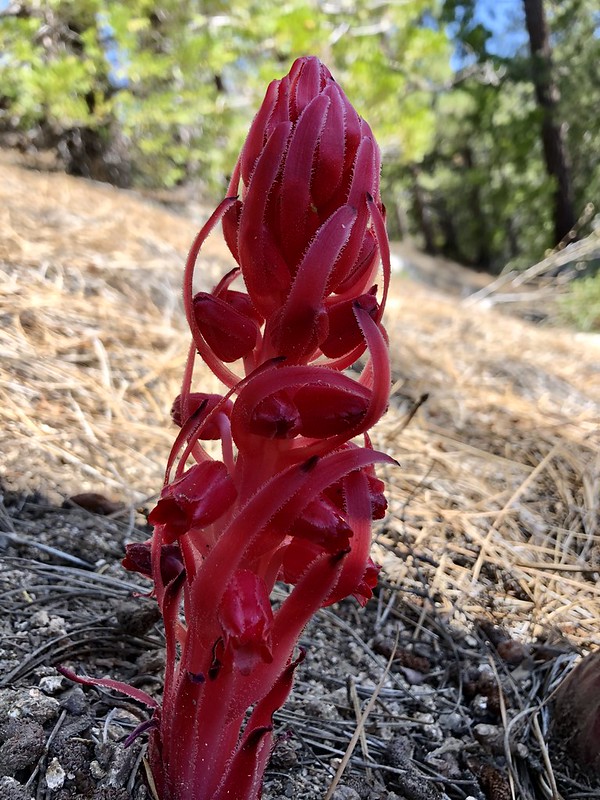 A plaque can be found on a boulder, possibly placed by the Sierra Club-Angeles Chapter.

Historians at the Notch 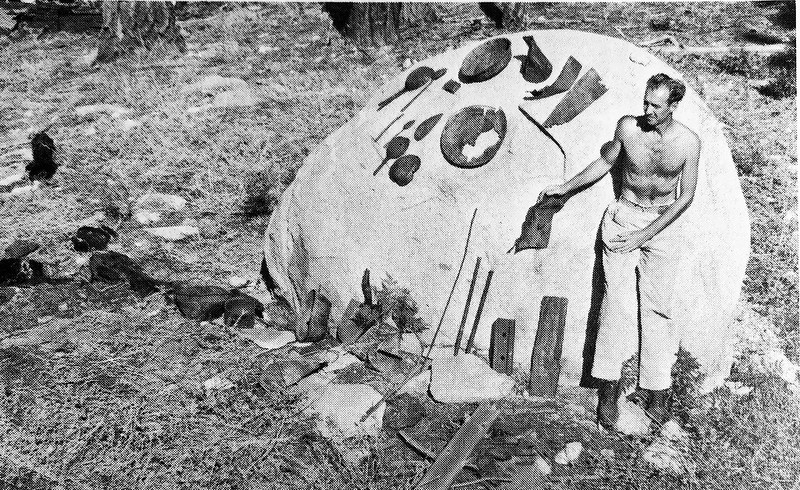 Historian Charles Clark Vernon III (1923-2015) collected personal stories from the old-timers of the San Gabriels and wrote a comprehensive historical account which would become his Doctoral dissertation at Occidental College, 1952. His “A History of the San Gabriel Mountains” was also featured in four parts in The Historical Society of Southern California Quarterly (1956)

John W. Robinson III (1929-2018), historian of Southern California mountains and author of hiking guides often led outings in the Angeles. Robinson hosted one such trip back in 1980 for the Sierra Club-Angeles Chapter to visit Sturtevant’s hideaway. It appears some relics were still remaining around the camp. 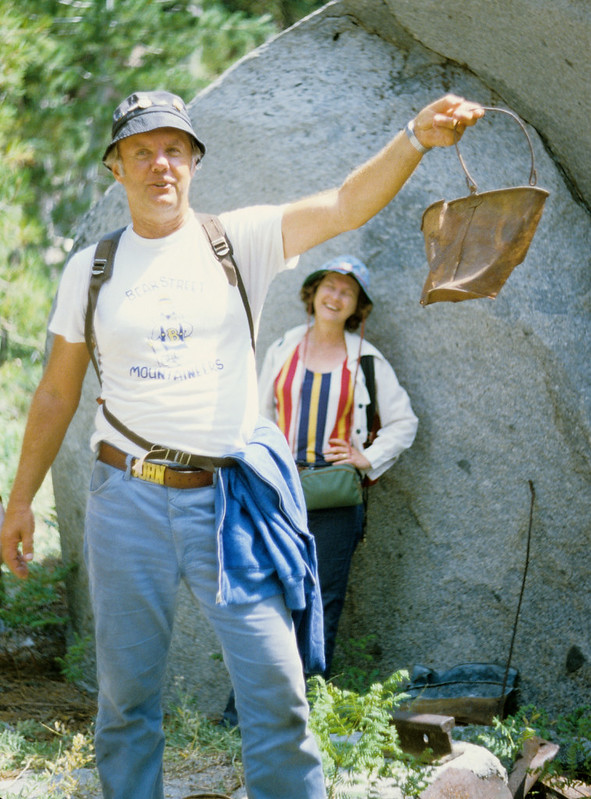 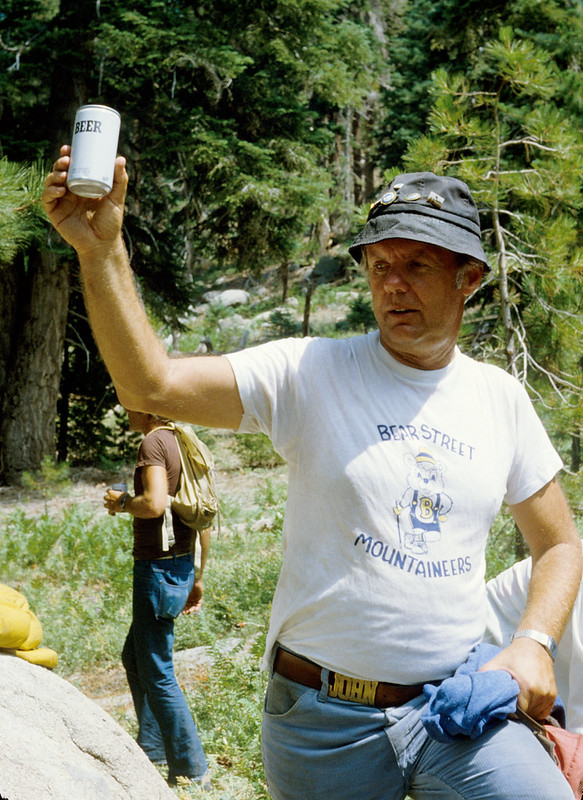 This is another excellent story of a small part of the history of the San Gabriel mountains. Well done, go job of research.

So wonderful. Such a unique story from the local mountains!

Girl you know how to do your research and a very good terrain navigator. A regular Ms Robinson!

Thank you so much I appreciate it. I haven’t been posting as much lately because I family stuff and plus the fire. Hopefully soon.

[…] would look towards this saddle for his friend. William “Sturde” Sturtevant had an isolated “sylvan retreat” next to a small spring in the saddle between Mt. Waterman and Twin Peaks. He’d spent time here to […]