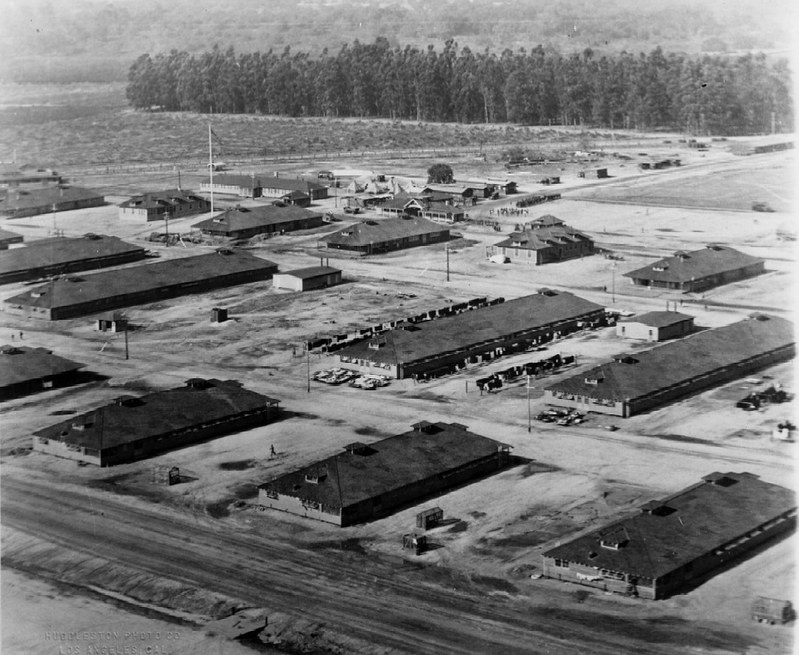 The US Army opened in Ross Field in 1918 to train U.S. Army balloon observation troops for World War I. Anita Baldwin donated the land to the government in order to construct the balloon school (the site was part of Lucky Baldwin’s old Santa Anita racetrack.)

The US Army Air Service trained their troops there in balloon handling, aerial photography, map-making, panoramic perspectives, observations, surveillance of ground fire and in ground tactics. The site of Ross Field is located southwest of the intersection of Santa Anita Avenue & Huntington Drive where the Arcadia County Park and Golf Course is now located. 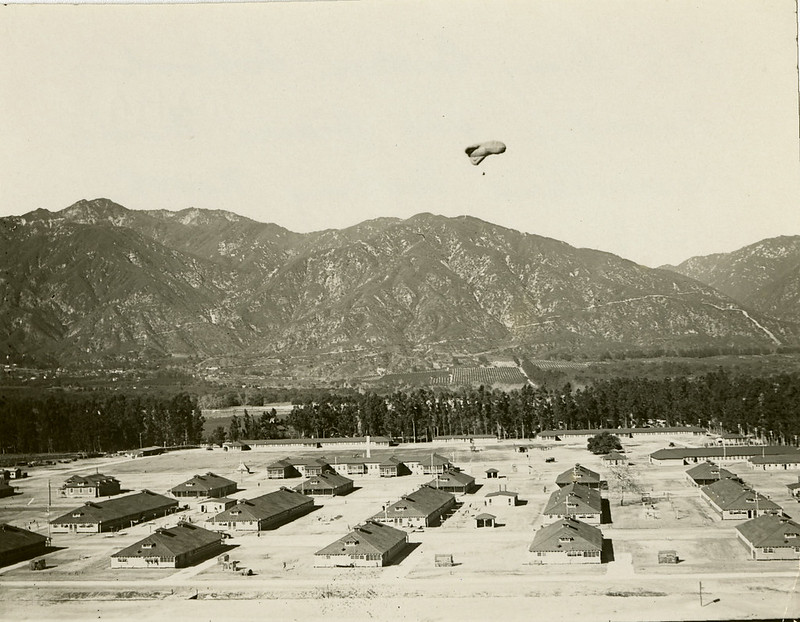 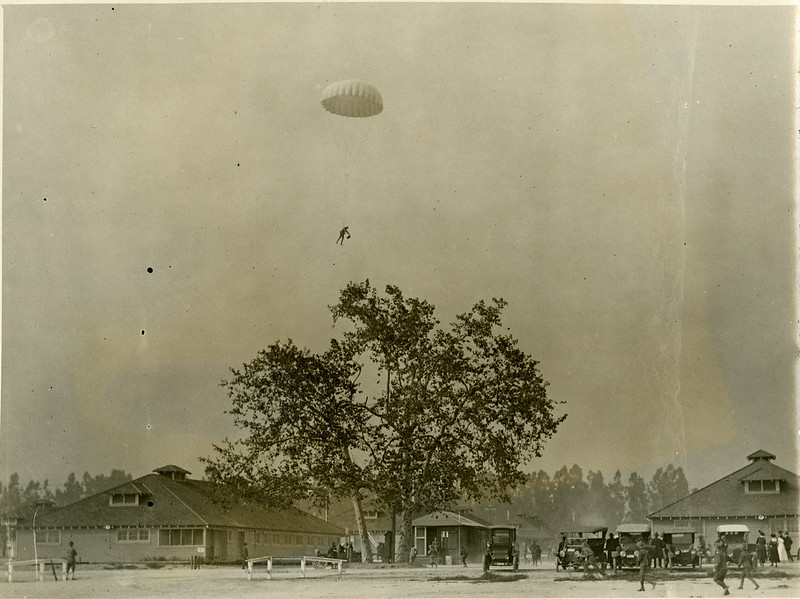 During the ongoing student cadet training at Ross Field, the government decided to built another camp at the top of Mt. Wilson where a panoramic view of the country simulated the high altitude observations from a balloon. At Ross Field, the Santa Ana winds would disrupt how high the balloons could be flown and create handling issues. But at Mt. Wilson, the students could learn the fundamentals without the windy obstacles. With the far-reaching views, the cadets would spend the day studying the territory, making maps and observing simulated artillery fire from the field below. 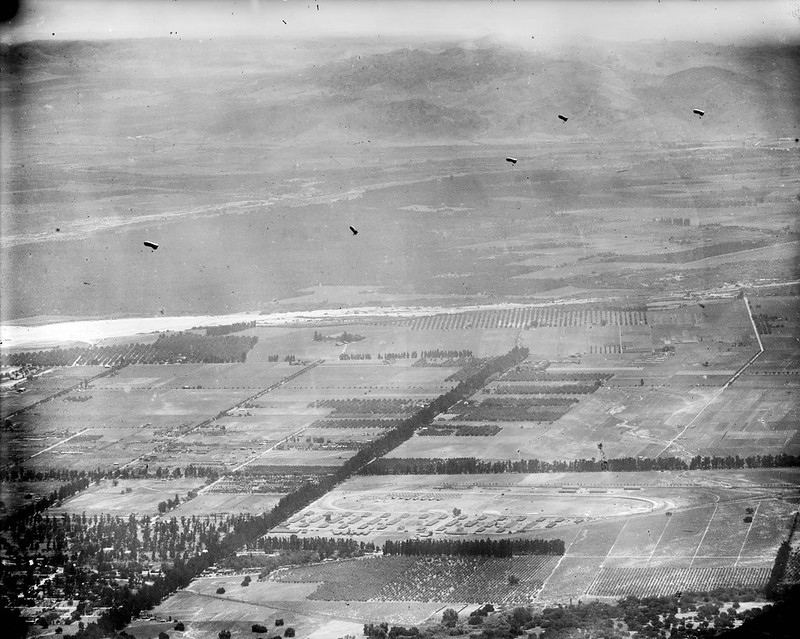 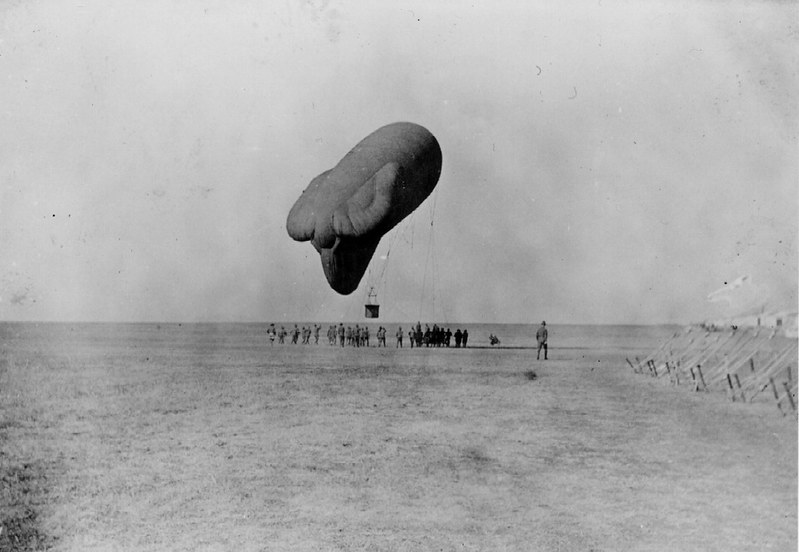 The army and forest service collaborated together Since June 1919 to patrol the Angeles National Forest by observation balloon. A lookout observer on an anchored balloon was flown at an elevation between 1500 to 3000 feet. Working from 7 am to 2:30 each  day, the observer had a commanding view of the country equipped with powerful field glasses and maps of the front country.

The lookout observer on the balloon used a telephone wire that ran from the observation balloon to the switchboard at the post headquarters where alerts would be transmitted to the Forest Service. A student observation camp stationed at Mt. Wilson also rendered lookout service by phone. Eventually, a fire-fighting truck was added to the field, ready with ten soldiers in case of fire.

Supervisor R. H. Charlton established a continuous day and night fire patrol of Angeles National Forest by both balloon and forest service. The night patrol of the forest was conducted by forest rangers in canyons and trails. 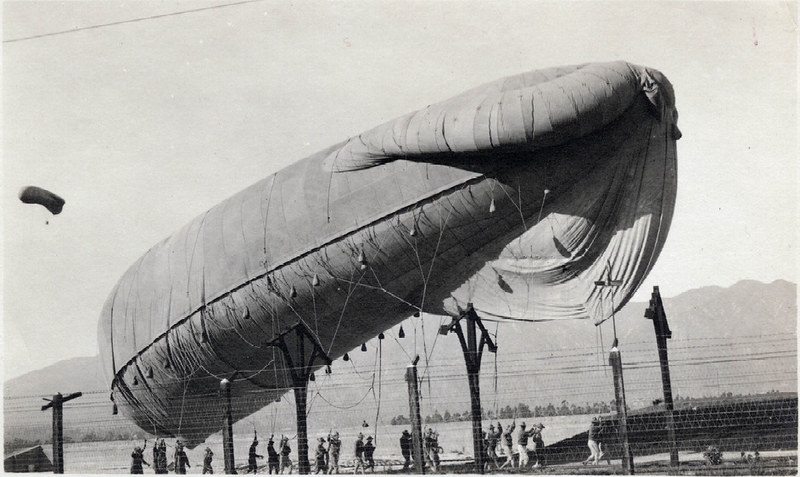 Airplane Fire Patrol in Action
Credit for detecting and extinguishing the first forest fire by the aerial fire department in California falls to the men at Ross Field, Arcadia, California, according to reports in the Washington, D.C. papers.
The fire was discovered by the lookout in the captive observation balloon at a height of 1,500 feet, who telephoned the location of the fire to the special fire truck maintained in readiness and manned by a number of enlisted men.
Just seven minutes elapsed from the discovery of the fire to the arrival of the truck and firefighters at the Lucky Baldwin Ranch at the foot of the Sierra Madre Mountains.
The balloon observer is furnished with complete mountain maps divided into numbered squares, a duplicate of which is in the office of the fire department director on the ground.June 1919 p. 3, Service bulletin by US Forest Service

The success of spotting fires during aerial patrol proved so great that the forest service wanted to make an aviation school at the present location of the Ross Balloon Field. Consequently, Rangers would be trained here in aviation and ballooning so that it would develop into a permanent part of forest fire-fighting. However, the forest service never secured the War Department’s approval for the plan, party because of lack of funds in the expense budget. 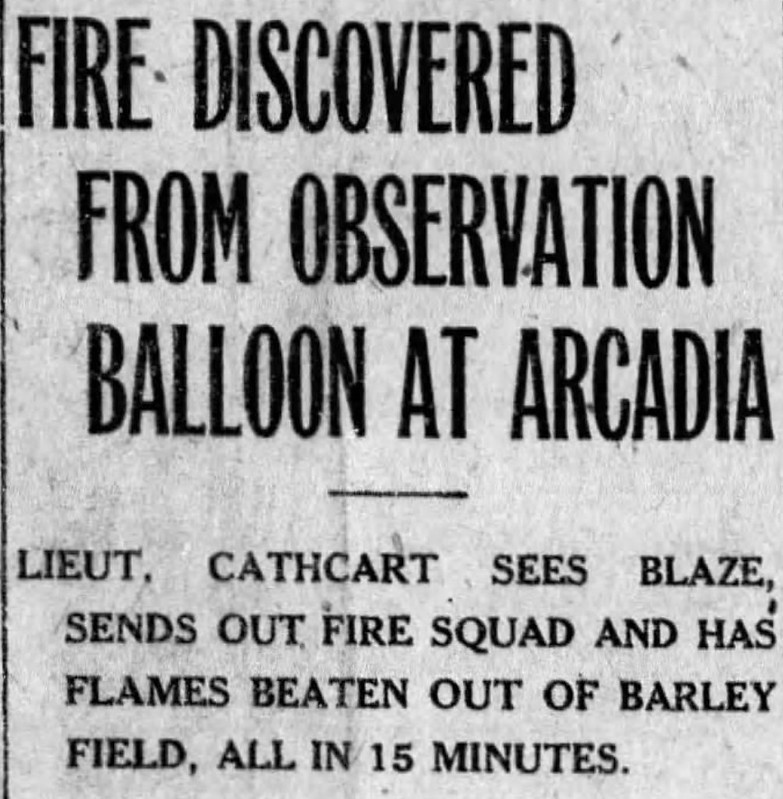 Following World War I, military balloons played a diminishing role in the Army while airplanes became reliable and advanced. The city later sold the Ross Field property to the county to be redeveloped as the current Santa Anita Golf Course. A small historical plaque at the site commemorates its prior role.

the historical plaque needs to be restored!

I didnt know there used to be one. Any pictures you happen to have?