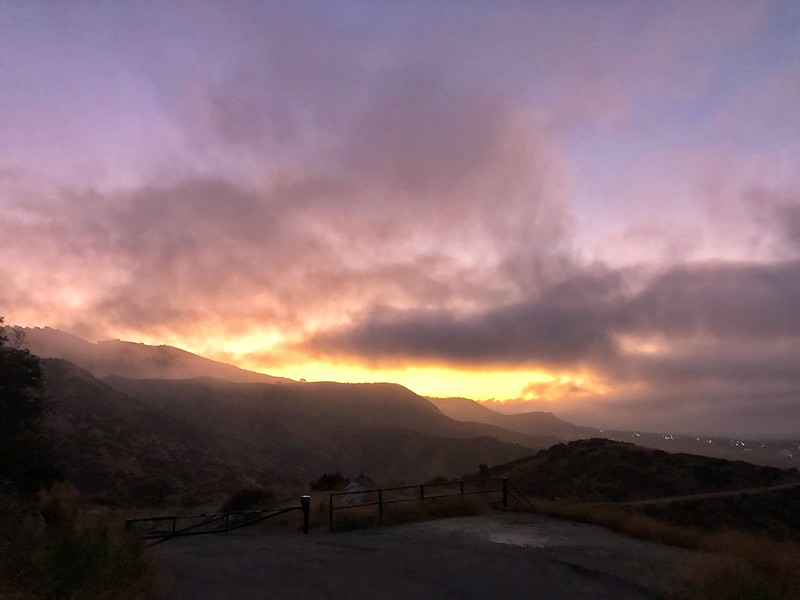 The Oat Mountain area lies within the Michael D. Antonovich Regional Park, land managed by the Mountains Recreation and Conservation Authority (MRCA). A common way to head to Oat Mountain is through the Chatsworth side via Brown Canyon Road. 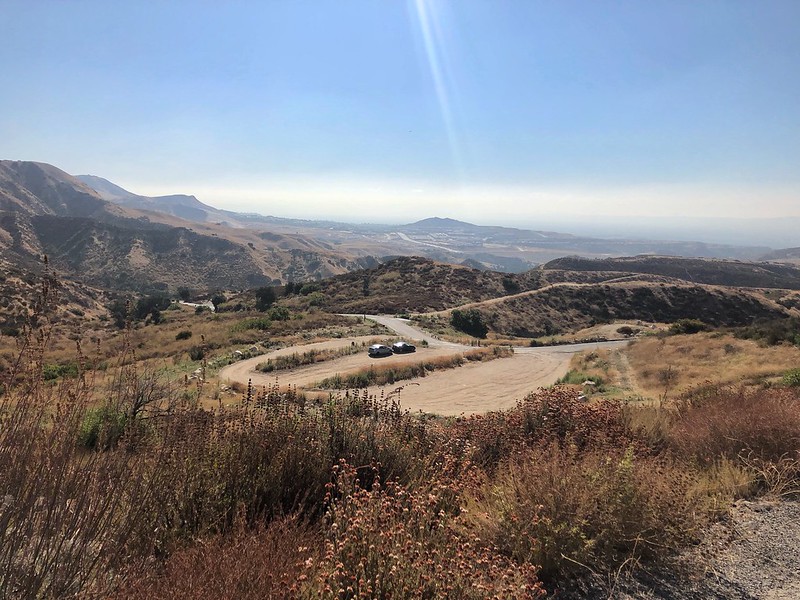 The entire road is paved to the summit but in less than a mile in after leaving the parking area, you’ll encounter the first remains of the nike site. After that, a few more strenuous miles leads to the antenna-dotted summit in which a former lookout stood. 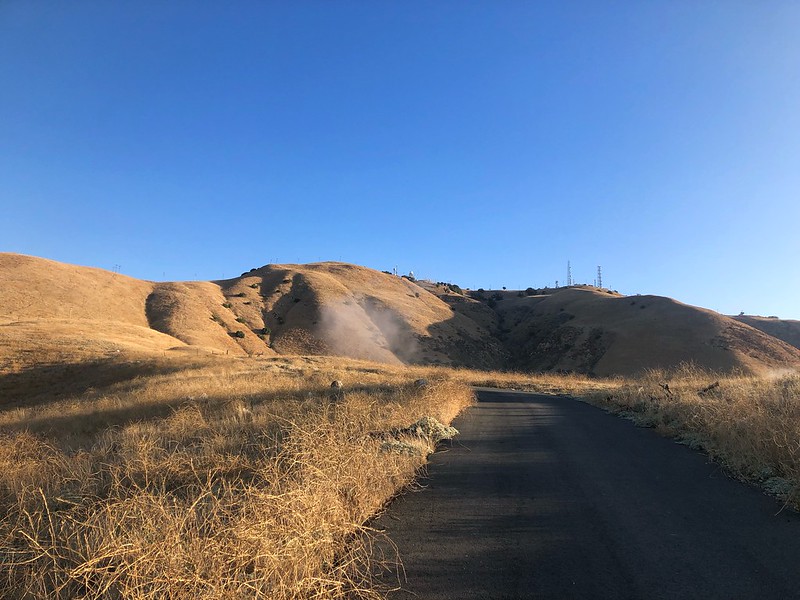 Looking at a cloud enshrouded valley from Brown Canyon Road 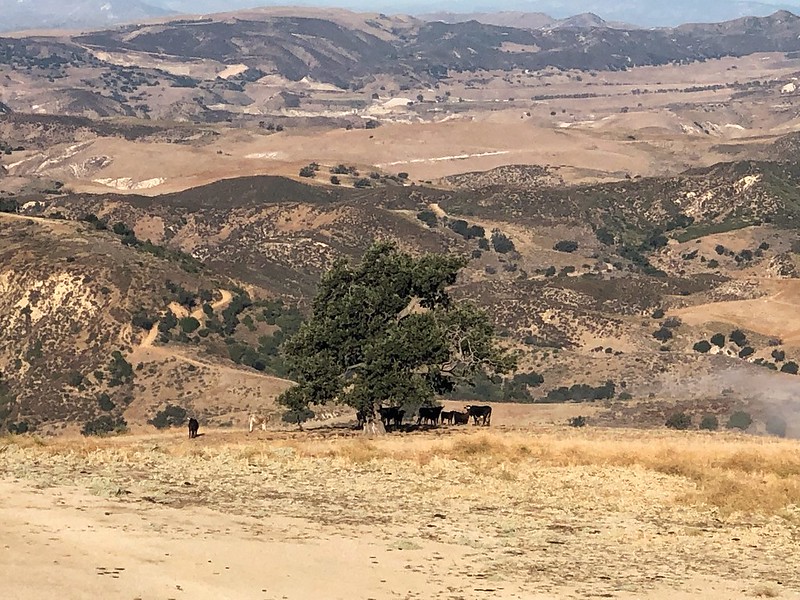 The Los Angeles County Forestry Department constructed a fire lookout tower here in 1923 under the direction of County Forester Stuart J. Flintham. It was thirty-six-feet high, 3,000 pounds and cost $650 to make. A small cabin was built at the base of the tower for the lookout staff, who were paid by both the U.S. Forest and Los Angeles county. A telephone line connected directly to the county’s Newhall district headquarters to phone in case of fire-spotting. 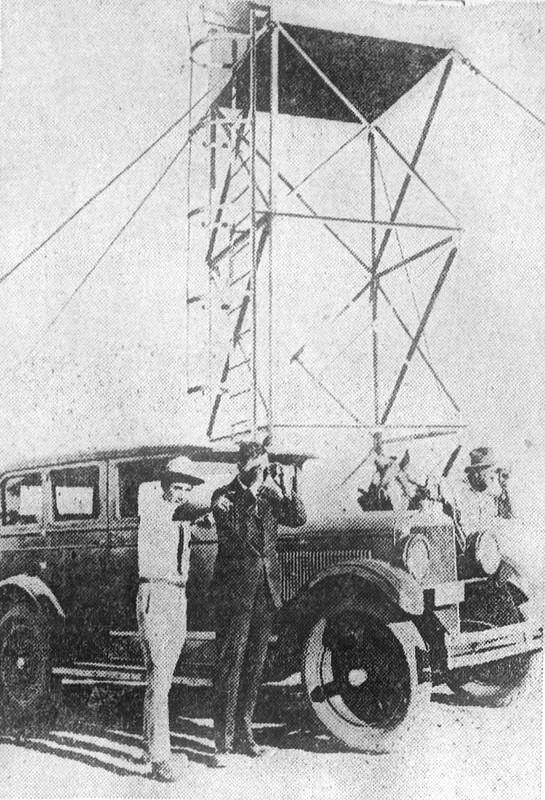 During World War II, the Oat Mountain site was manned on a 24-hour, 7-day schedule as it played a crucial role in the aircraft warning system. Aircraft spotters had to share the tower with the lookouts, which prompted the veteran lookout, Victor Lopez to quit as he said, “it got too crowded in here.”

In 1937, the old tower was replaced by a new tower, which was ten feet higher and had the living quarters on the same level but by 1951 the Pacific Telephone Co. decided to install their microwave relay station at this site. A compromise was reached in which the phone company removed the old tower and simply added a suitable second-story lookout to their antenna tower. 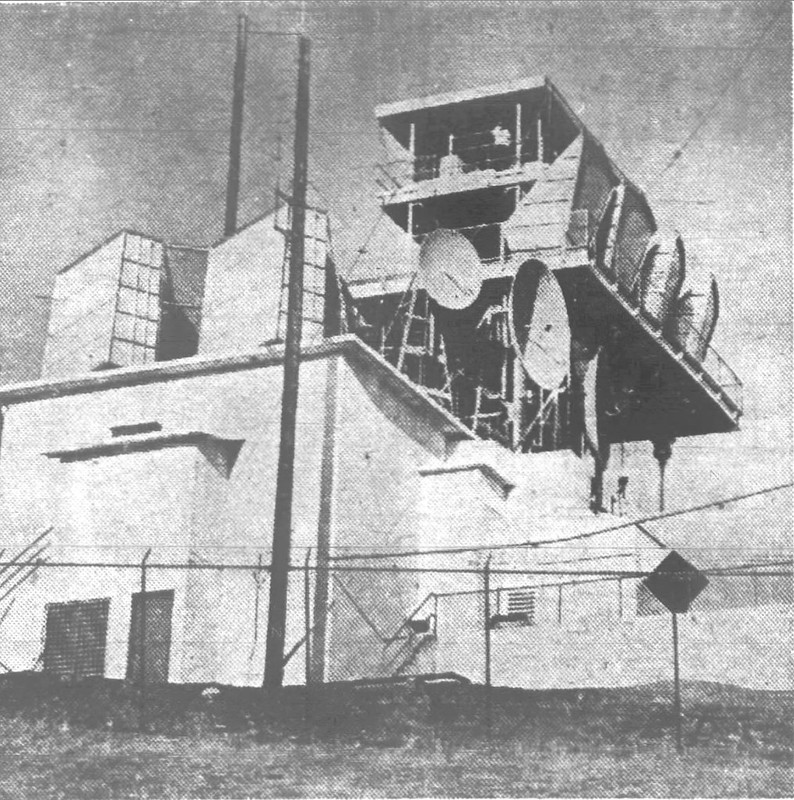 Oat Mountain fire lookout, from The Signal, 1963. “TWO-FOLD TOWER Another view of tower shows some of the complex microwave equipment installed by the telephone company. Both Fire Dept. and phone company share this unit.” 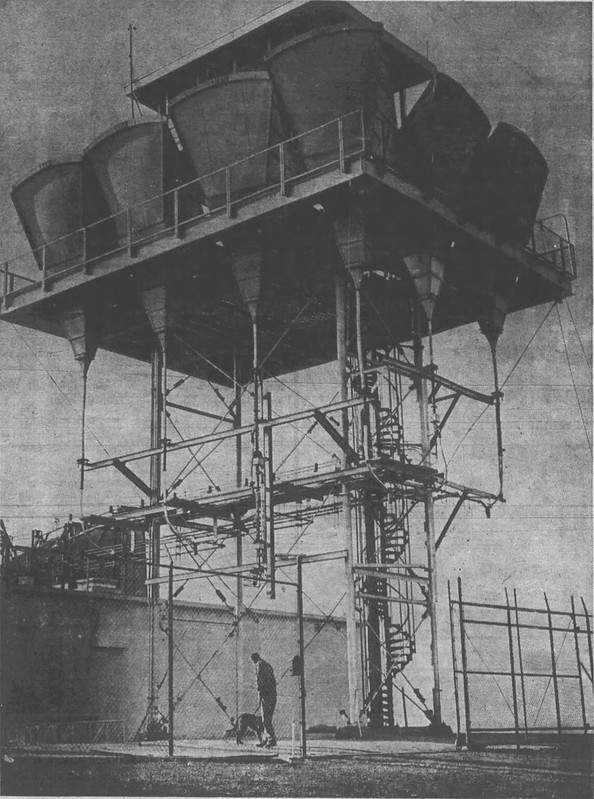 From The Signal, 1963. Large triangular shaped antennae surround the lookout room. It has stilt-like legs that withstand up to 125 miles per hour. Note the spiral ladder heading up the tower.

The Oat Mountain fire lookout served Los Angeles for 50 years from 1923 till 1973 before being closed for poor visibility caused by smog issues. In the later fire seasons, Oat Mountain was only spotting 10 of the estimated 74 brush fire incidents in the area.

Today, Oat Mountain summit is a site of microwave relay antennas, Doppler weather equipment and oil wells. However, sweeping vistas of the valleys below are still magnificent. 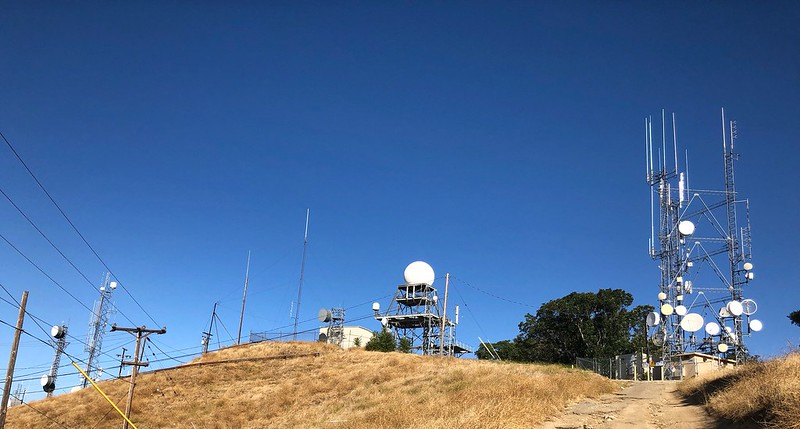 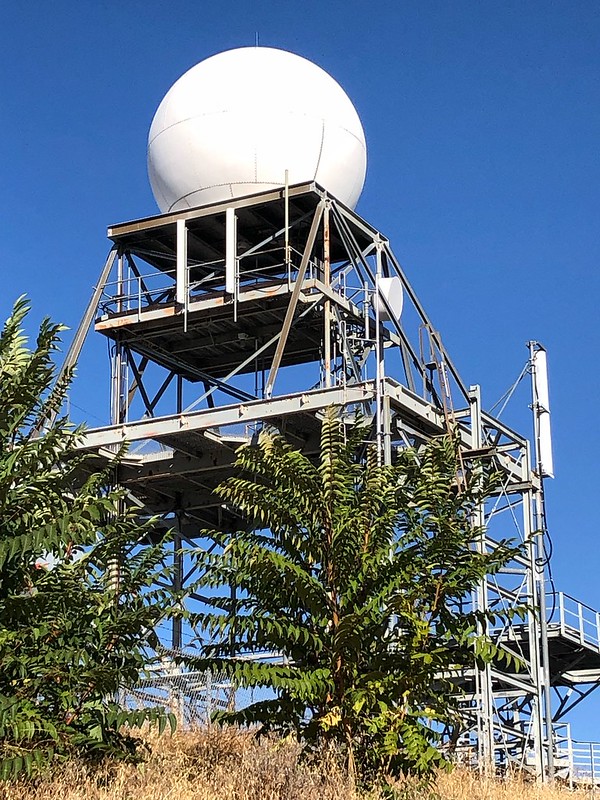 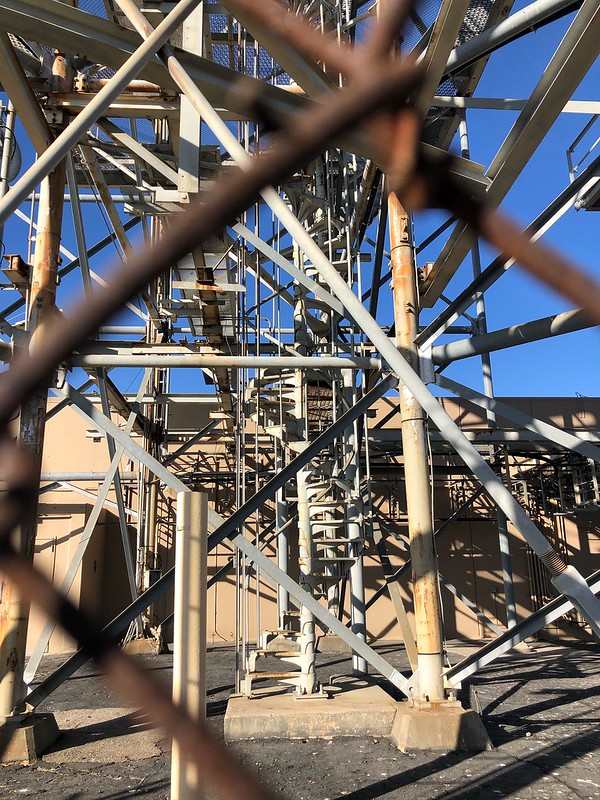 Same spiral ladder up the tower

A few decades after the fire lookout tower was erected, the U.S. entered the Cold War era and built nike sites to protect cities from Soviet Union nuclear attacks. A ring of nike sites were strategically built around the most important cities, with Los Angeles having a total of 16. 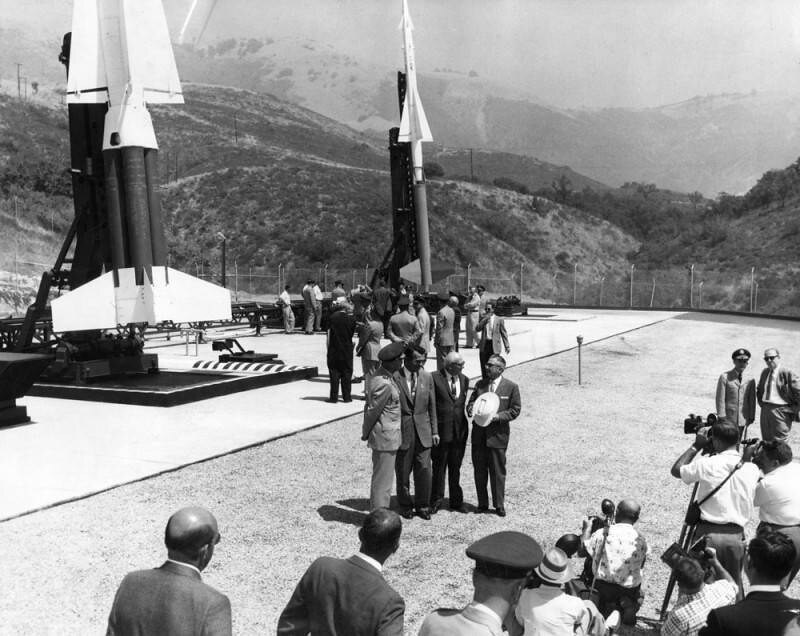 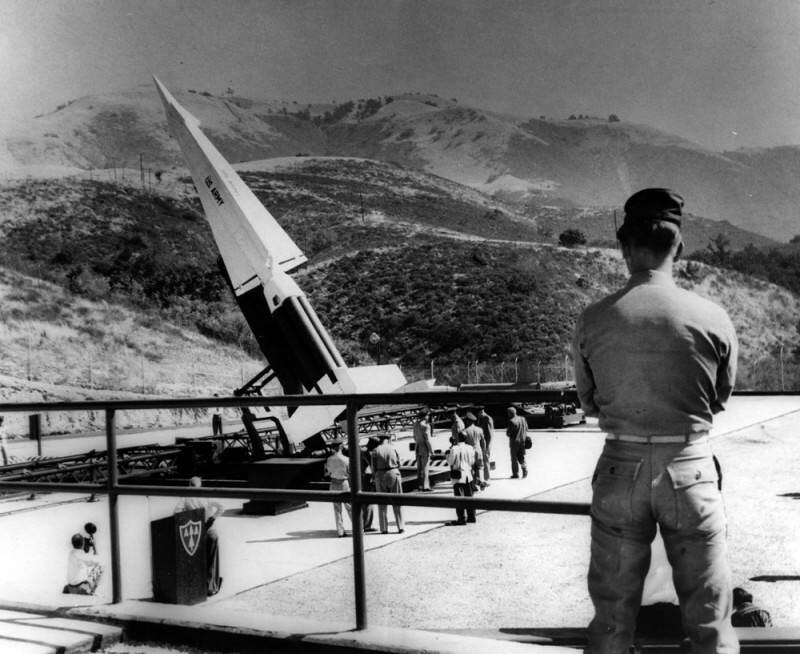 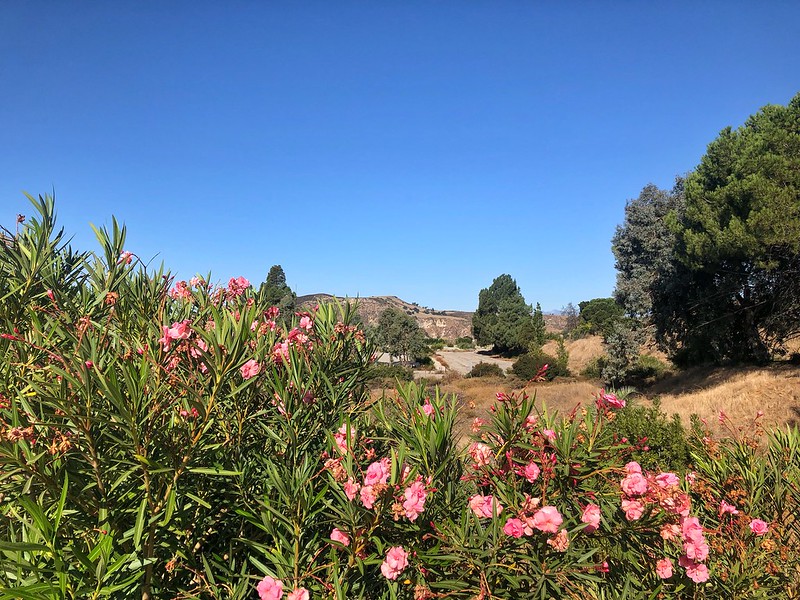 The Launcher area housed powerful anti-ballistic missiles in an underground storage facility as well as buildings for missile assembly and fueling. A sentry dog kennel was built for the guard dogs to stay ready in case of any possible intruders. 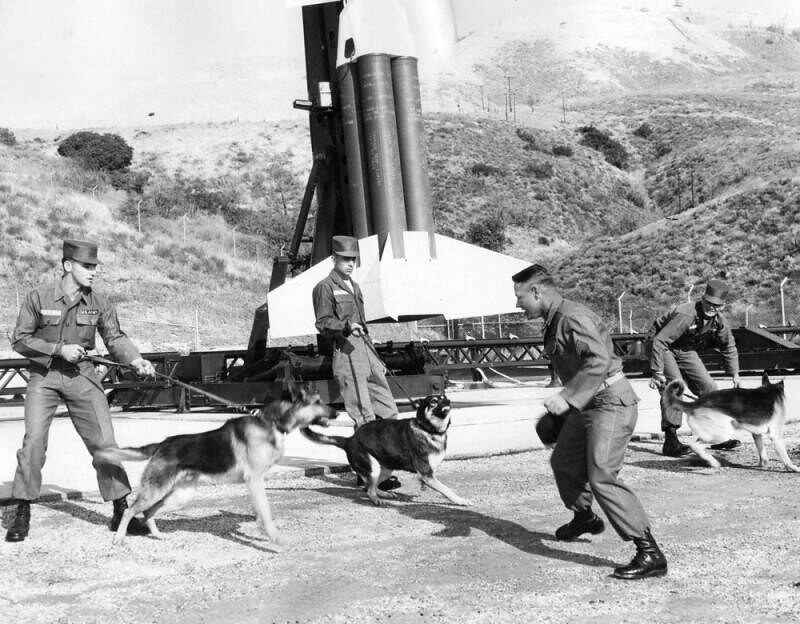 A few buildings remain today, in deteriorated condition from time, vandalism, wildfires, etc. The launcher area is the most preserved section of the nike site… 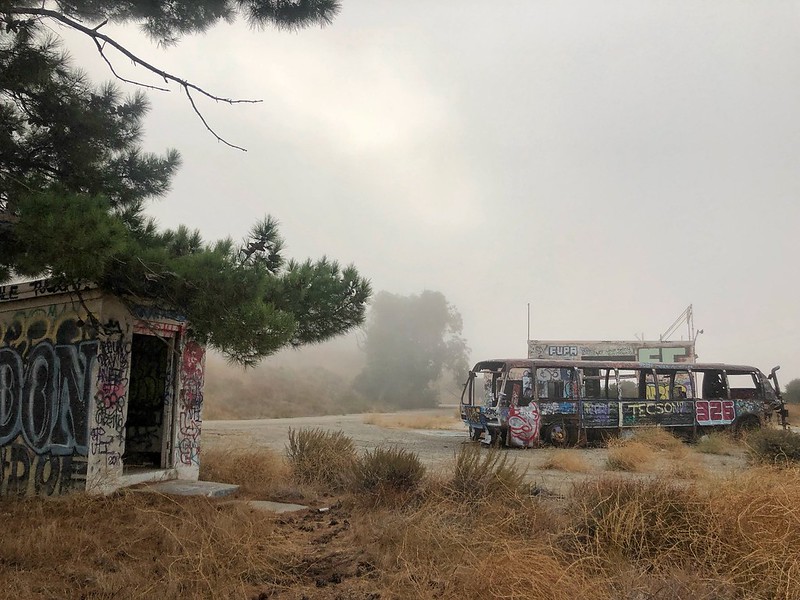 Nike buildings on launcher area, with a mysterious abandoned bus 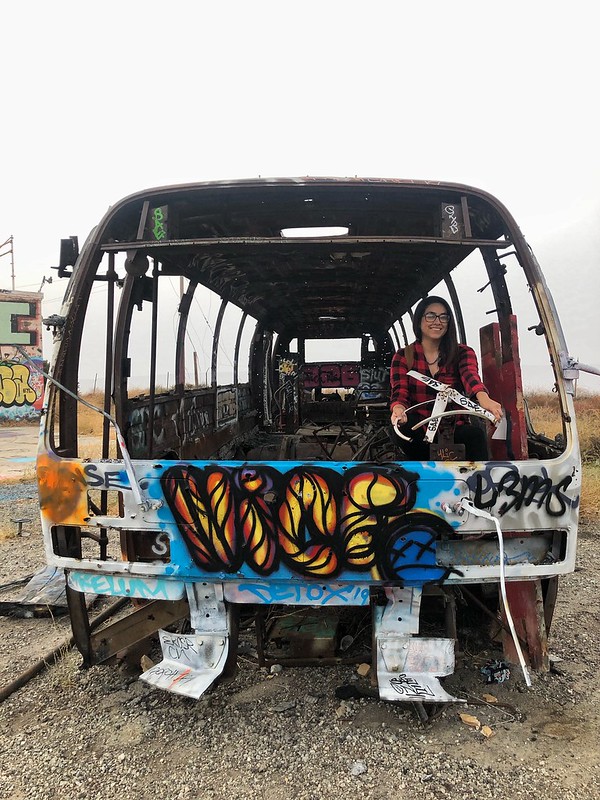 Long abandoned city bus near the launcher area, may have been used for LAPD training exercises 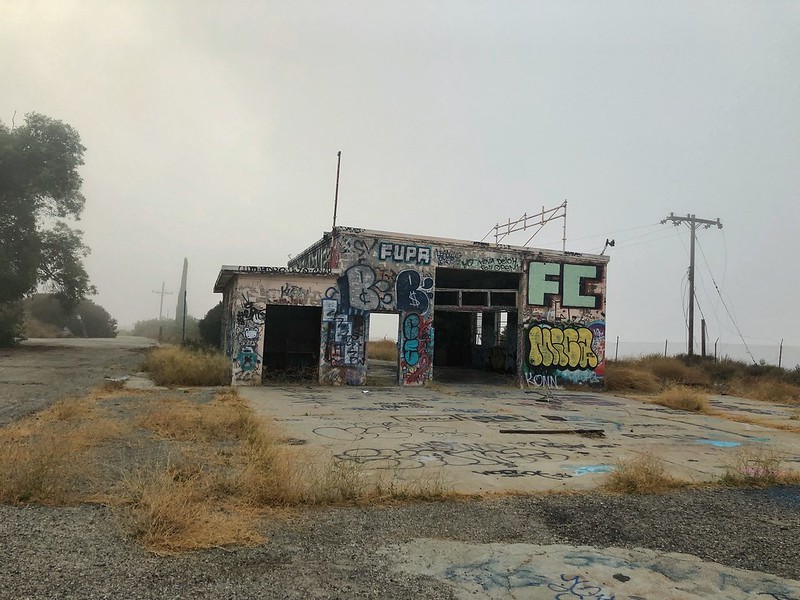 Inside a building in launcher area

Inside a building in launcher area 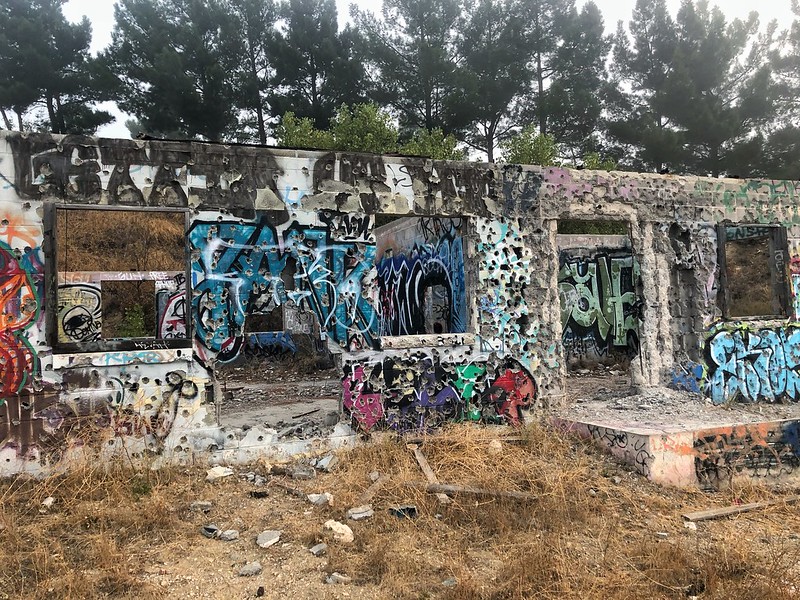 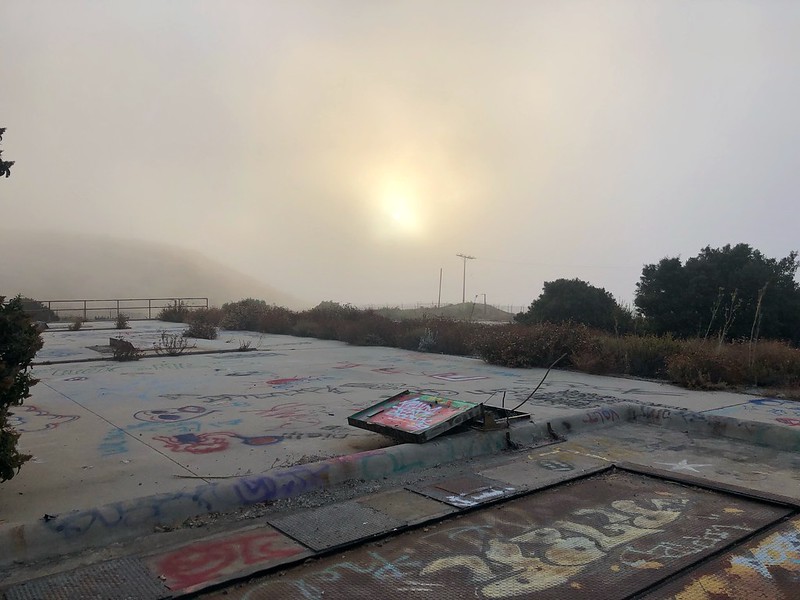 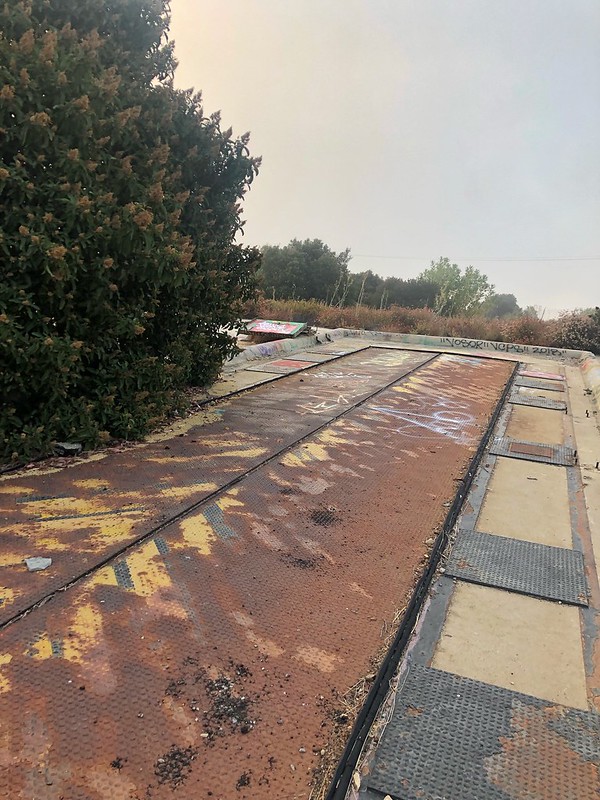 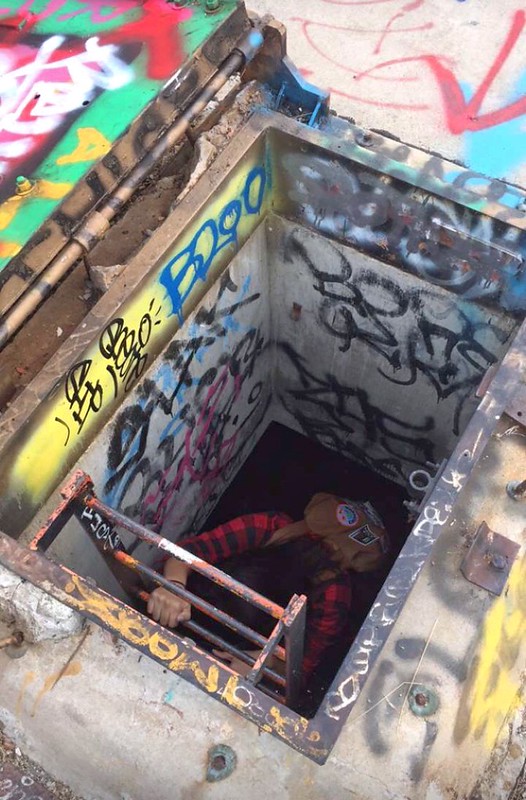 There is an opening to head down to the underground level. A long ladder heads down to a big dark room 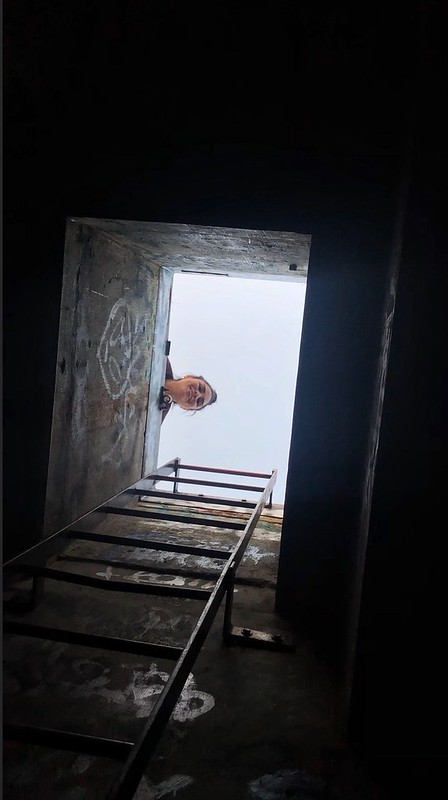 Looking up from the underground storage missile facility (zoomed in) 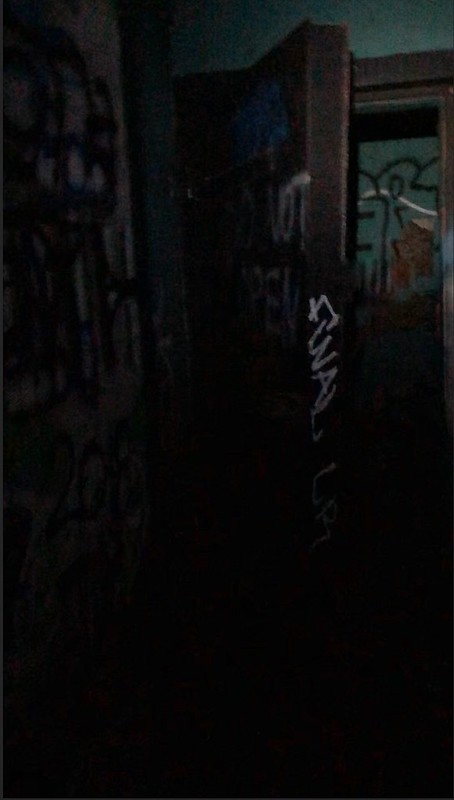 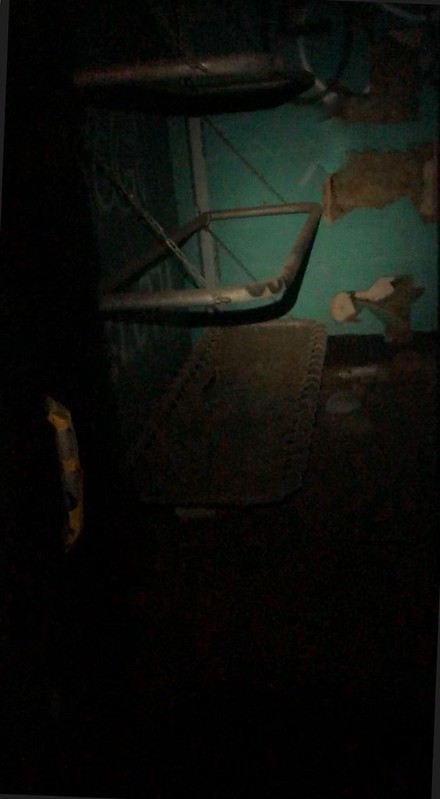 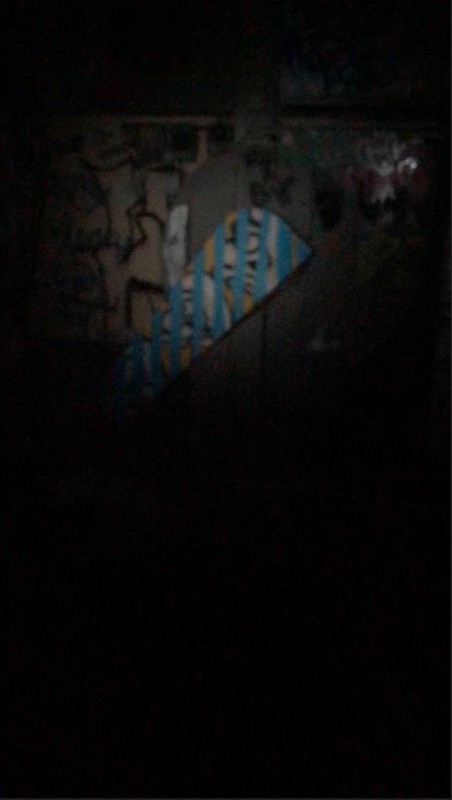 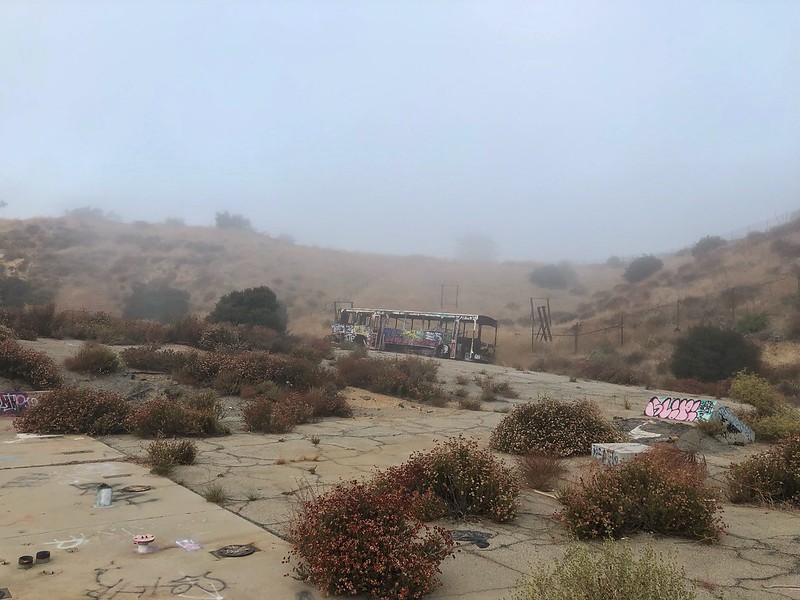 Back to the launcher area, main deck with a second city bus 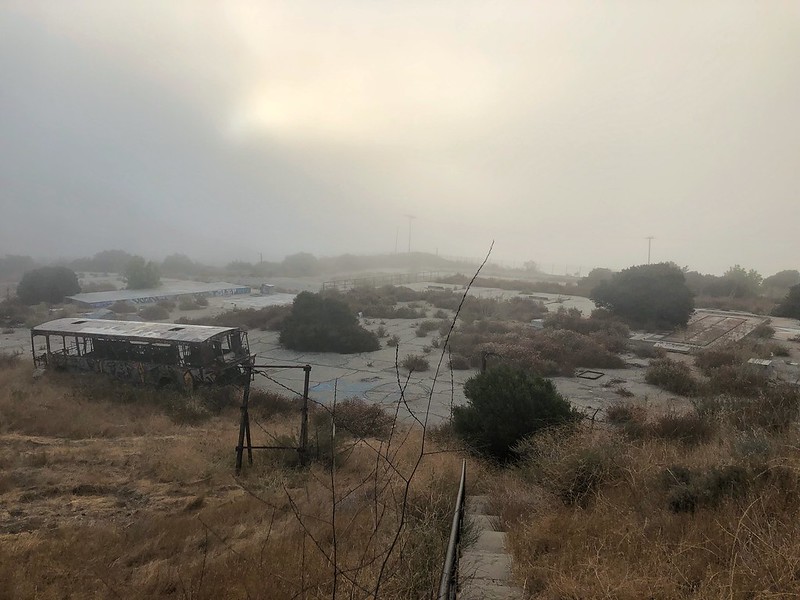 Looking back at the launcher area from a dilapidated staircase

The Oat Mountain Nike Site was in operation from 1957 to 1974. From 1978 to 1990, the California Conservation Corps (CCC) established a camp here in which corps members worked on fire control and conservation projects. The site later became training grounds for the LAPD and SWAT team, however it is unclear if they still use this area to train. 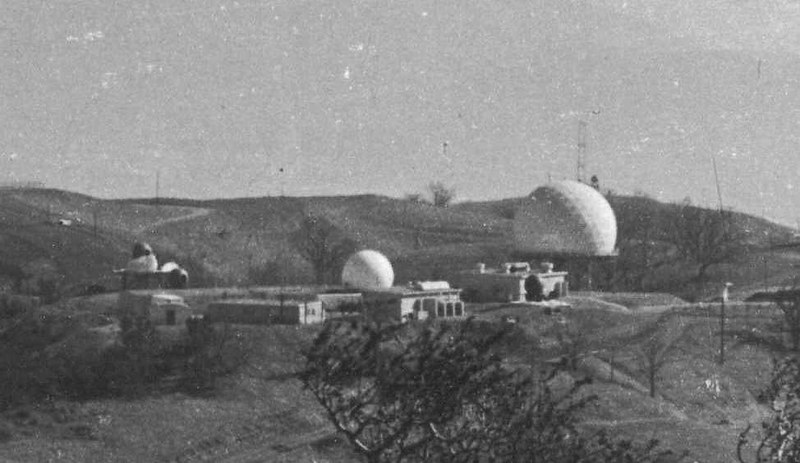 The Nike Missile site and the Oat Mountain lookout tower worked in tandem to protect Los Angeles for 18 years. Eventually the tower was closed and LA-88 was decommissioned shortly after.

More exquisite work. Thank you for your passion and your scholarship.