As early as the 1900s, Mount Wilson has provided a vantage point to detect fire in the west end of the forest and the San Gabriel Valley. R.H. Charlton, supervisor of the Angeles national forest stationed rangers and forestry guards on Mt. Wilson to serve as lookouts. In the early 1920s, the United States Army Balloon School at Ross Field, Arcadia stationed a student observation camp at Mt. Wilson which rendered lookout service by phone.

In 1924, the Forest Service began occupying the 150 foot solar tower: “…a lookout-fireman utilized the solar tower on Mount Wilson for supplementary detection but the firefinder was rarely, if ever, taken up on top.” –Fixed Point Fire Detection: The Lookouts by Mark V. Thornton, 1986. The tower was possibly used until the 1940s. 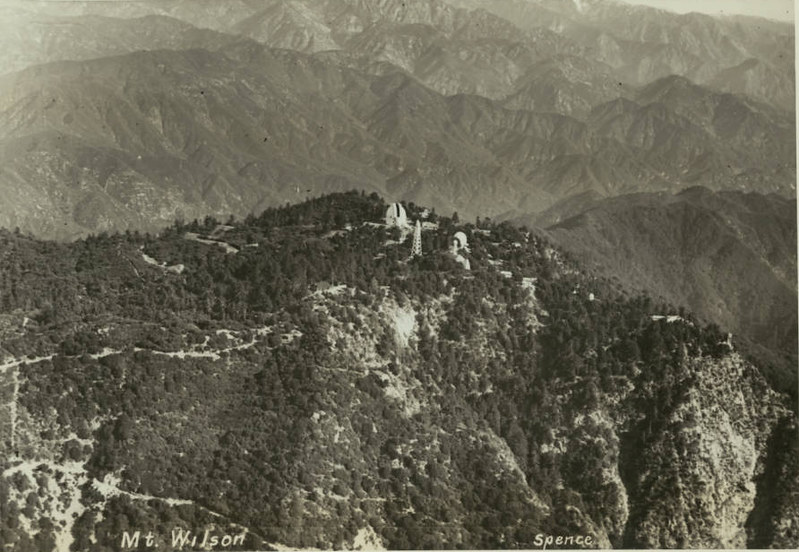 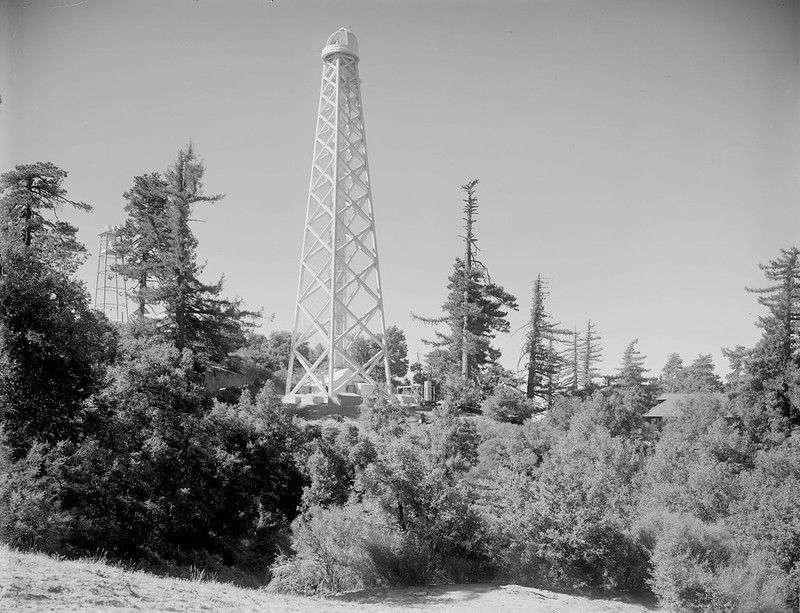 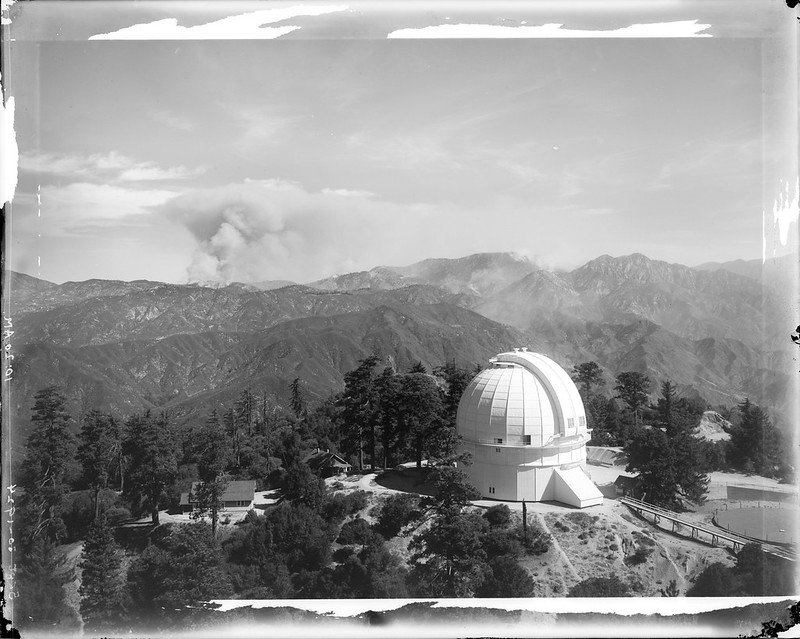 Fire detected in west fork of the San Gabriel River, as seen from Mount Wilson, 1924. Credit: The Huntington Library 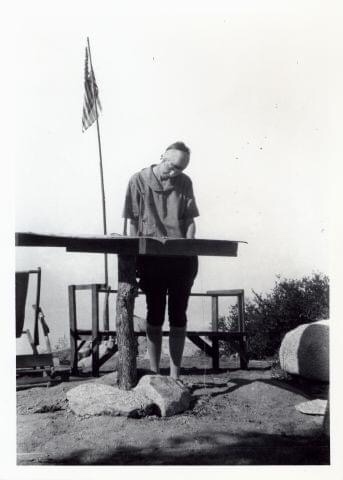 “To provide for the discovery of forest fires as soon as they break out, the forest service has decided to station lookouts on the highest points in each forest area. This system already is practically in effect in the Angeles Forest. The ranger on Mount Wilson is able to see over most of the western end of the forest…Mount Wilson is in close touch with the surrounding region by telephone…” Los Angeles Evening Express

“R.H. Charlton, supervisor of the Angeles national forest has stationed a lookout on Mount Baldy and will station one on Mount Wilson.” Los Angeles Evening Express

“The observation balloon over the Arcadia Field is to be maintained at an elevation about 3,000 feet from 7am until 2:30pm each day. The student detachment learning observation, now stationed Mount Wilson, also will render fire lookout service. Reports of fires from both the balloon observer and the Mount Wilson detachment will be telephoned to the Army Balloon School and transmitted to the Forest Service office at Los Angeles.” The Bulletin

“CAMP ON MT WILSON Upon completion of these subjects the students are taken to the observation camp near the summit of Mt Wilson and there given work In the regulation of artillery fire, location of enemy batteries, and general observation. A modern camp completely equipped for all phases of the work taken up was built on Mt Harvard, just below Mt Wilson, shortly after the establishment of the school at Ross Field.” Monrovia Daily News

“The highest observation tower in the United States Is now In the service of the forestry department as an aid in protecting the Angeles National Forest against fire, R.H. Charlton, forest supervisor, reported yesterday. It is the Mount Wilson observatory tower, donated for the use of the forestry officials during the present season, considered to be the most dangerous from the standpoint of fire hazards In the last twenty years.

Lewis H. Humason of the observatory staff has volunteered his services as lookout to report signs of fire to the forest supervisor’s office. According to Supervisor Charlton, the work of Mr. Humason in this tower, a mile high and overlooking vast stretches hidden from the regular lookouts, will aid Immensely in fire prevention.” The Los Angeles Times

“…8-year-old Colleen Moran was rescued from a perilous ledge position yesterday by a forestry lookout and a score of C.C.C. youths. Bruised and scratched and crying, she was taken to the Mt. Wilson lookout tower…Moran saw he would be unable to locate the screaming girl so he shouted advice, ran more than a mile to the lookout tower and sought the aid of Keith Kaylor, forestry guard.” The Los Angeles Times