All that we know about the Mount Pacifico fire lookout comes from an LA Times article published on December 4, 1932:

“A marvelous view of hills and mountains and desert can be had from this point. A short walk from the car brought us to the foot of the look-out tower and the more hardy of our party climbed the steel rungs to the small platform, where an unending panorama was had for miles in every direction. The glistening Mojave was right at our back, and seemed to be directly under our feet although in reality it was many miles away.” 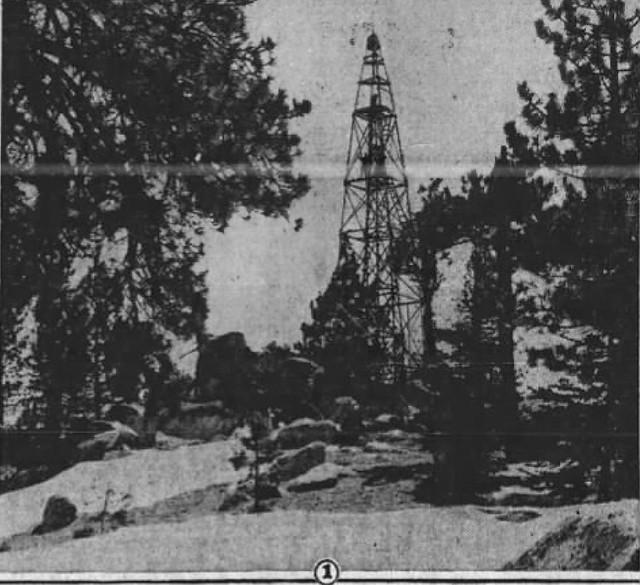 If you excessively strain your eyes, you can see two people standing on a platform of the tower. The boulders featured in this photo bear resemblance to the boulders on Mount Pacifico today, although I could not find a perfect angle to recreate this photographer’s perspective. This gave me doubts about whether this was built on the summit proper itself. However, anyone that has visited Mount Pacifico has noticed the metal posts on the tallest boulders. If the above photo had a better resolution I could see how those metal posts were built as the lookout’s base. 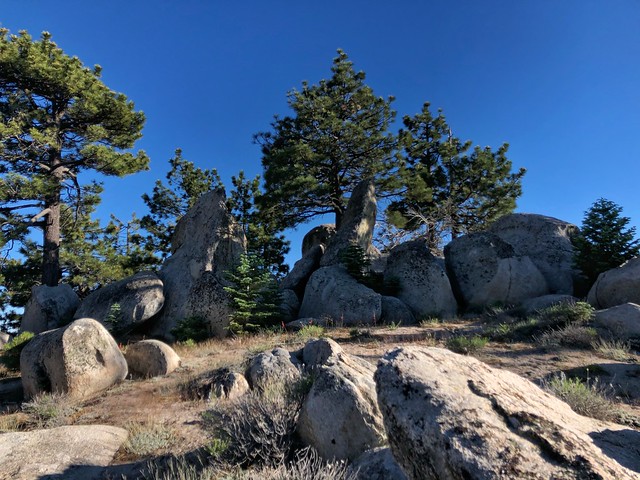 Mt. Pacifico as it looks today 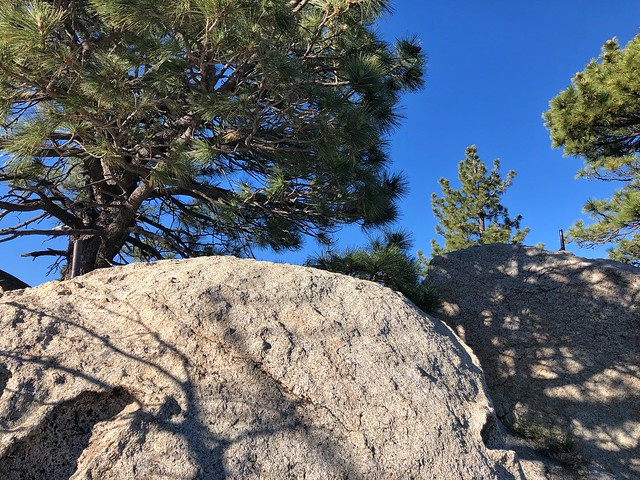 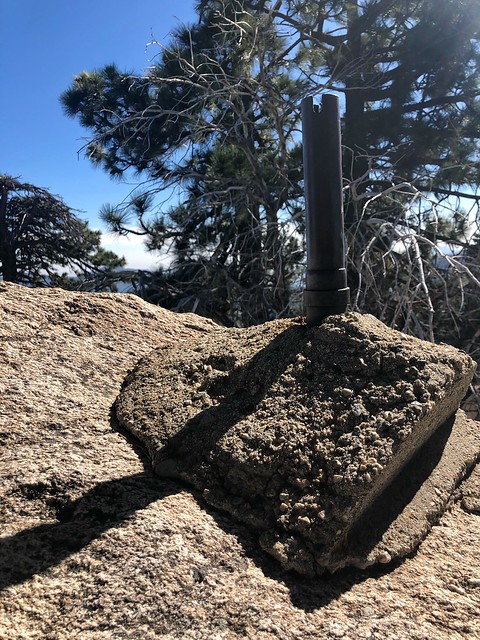 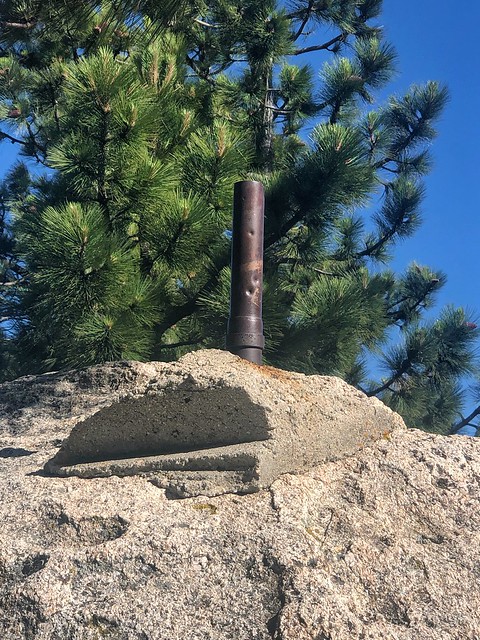 Metal post and concrete that may have served as a base for the lookout. Is the center hole where the benchmark used to be? 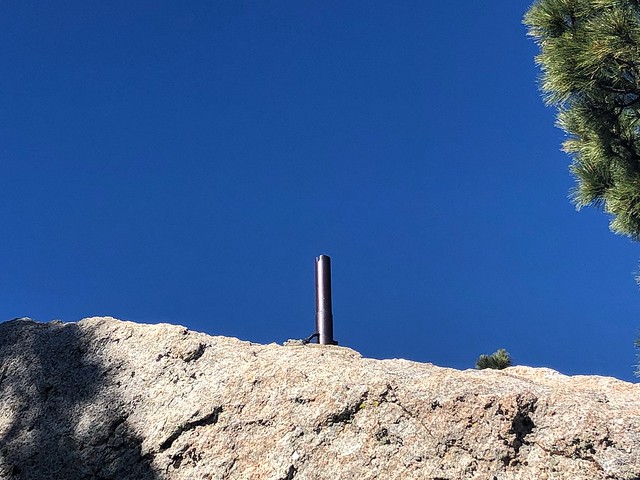 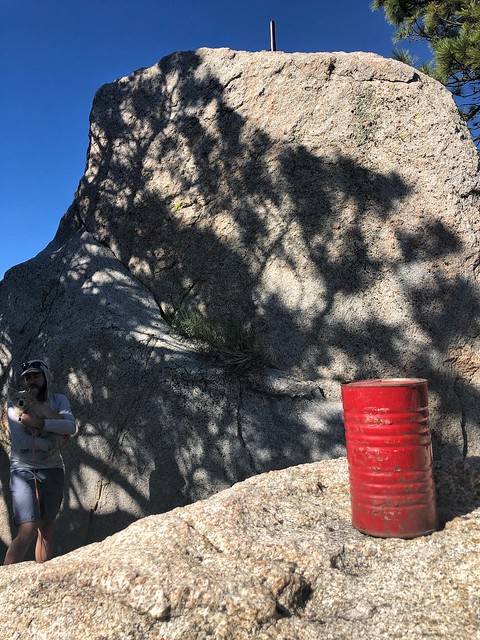 A few other interesting remnants along Mt. Pacifico I found were drill holes on the sides of surrounding boulders as well as other hardware bolted or laying around. I have yet to figure out how it all came together. 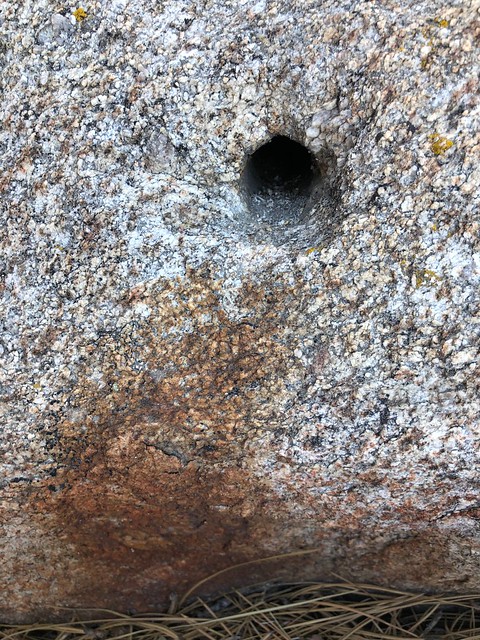 A metal post may have been fixed in this drill hole. A tail of metal corrosion left behind. 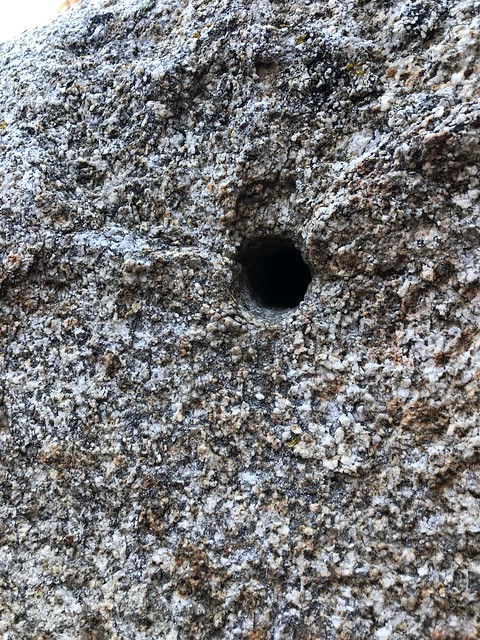 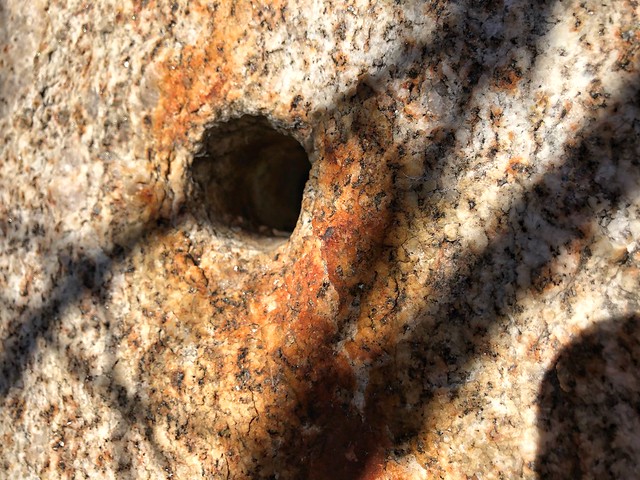 A third one that experienced a bit more corrosion 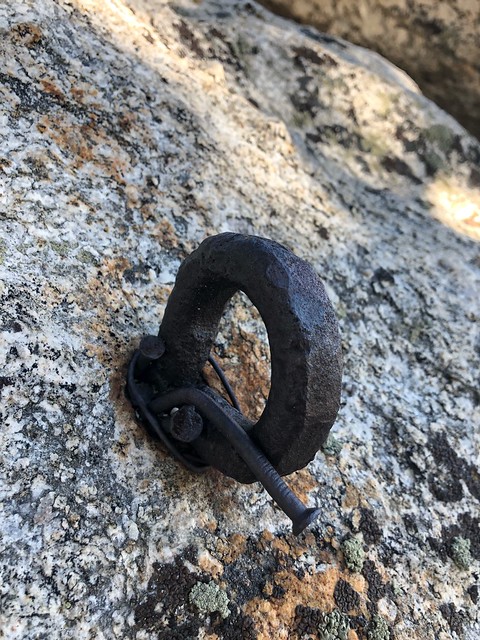 Hardware anchored onto the boulder

It’s also interesting to note that although this article called it a fire lookout tower, it doesn’t look like the other lookouts built in the San Gabriels around this time. In fact, it’s the only one that does not remotely resemble the others. All the other towers were built with cabs. So why this kind of lookout was built in Mount Pacifico is a mystery. Regardless of how it looks, the main objective of the early forestry was to get up over the treetops so early lookouts might have climbed a tree, a water tower or building to look for smoke. Besides, similar fire lookout towers without cabs were built throughout the states.

This lookout tower has slipped from history texts, becoming one of the many enduring mysteries of the San Gabriels. What we do know for certain, however, is that these mountains provide us with enjoyment time and time again.

Super interesting Missy. I did not know that there was previously a lookout on Pacifico. Now the bore holes, anchors, and pipe remnants make sense. That lookout is wild-looking. Almost looks like an old-school oil well.

It totally does! And all those remains make me think it was intended to be permanent. I just want to know why they took it down !

Long-time San Gab hiker here, Grew up in Pasadena and needed something to do on the weekends. It all started at Henninger Flats . . .

Anyway, your research on similar towers was great, and at one point I was thinking the Forest Service cooked the books and got a low-rent lookout tower built on a Survey budget, but now I think the original article you posted just erroneously and generically referred to it as a ‘look-out’ when it was really for survey purposes. If they needed to survey the location of an existing fire, it was probably useful, but you need a tower with a ‘cab’ so the observer on duty can nip fires in the bud as they become visible.

Thanks for reading! That’s exactly what I was thinking. It is quite odd that there are no other records on this lookout, and so I have to agree with you that the journalist must’ve referred to it generically as a lookout since it was climbable. But you are correct about the cab missing. All the other lookout towers in the San Gabriels were built with cabs with having lookout staff on semi-permanent duty. I just wish I had answers as to how long it was there since the footings seemed quite permanent.

With all the aerospace companies and science work in Southern California, it looks to me like an old-school instrument tower. Remember Albert A. Michelson studied the speed of light using Mt. San Antonio (AKA Mt. Baldy) and Mt. Wilson in 1926 (Akshay, 2014). I have seen similar towers in the desert in photos that my father has from when he worked for Aerojet in the 1960’s. It was probably a temporary structure because there are guide wire anchors and it is so slender.

Having camped there many times I can’t imagine being up on that tower. It mush have shook like crazy in the frequent high winds