Mount Emma (5273ft) is a semi-desert peak in the northwest San Gabriels, above Antelope Valley and was named after the reputedly lovely Emma Pallett, one of the young Pallet Ranch daughters in the 1900s. 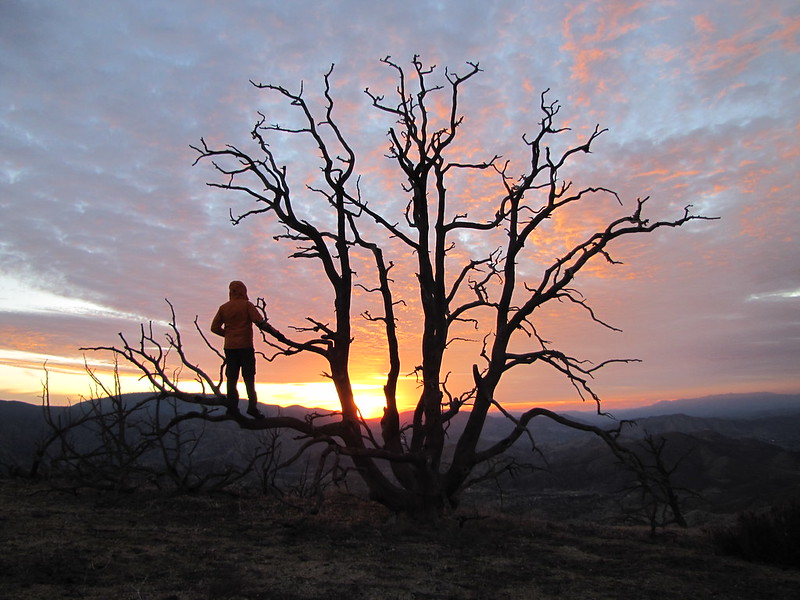 This Mojave climate peak is barren with a sparse covering of brush especially since it has been through its round of wildfires.  Regardless, the views of the desert and mountains are outstanding and Mt. Emma is included in the Hundred Peaks List of the Sierra Club. 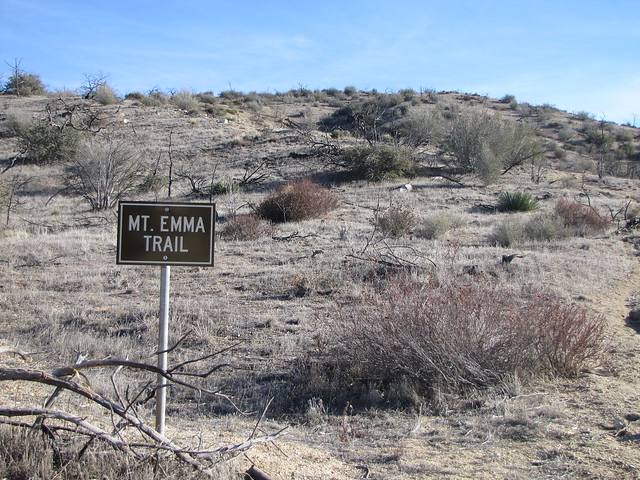 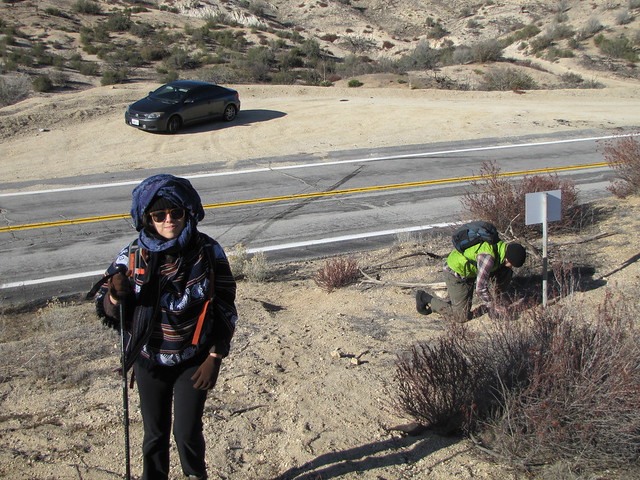 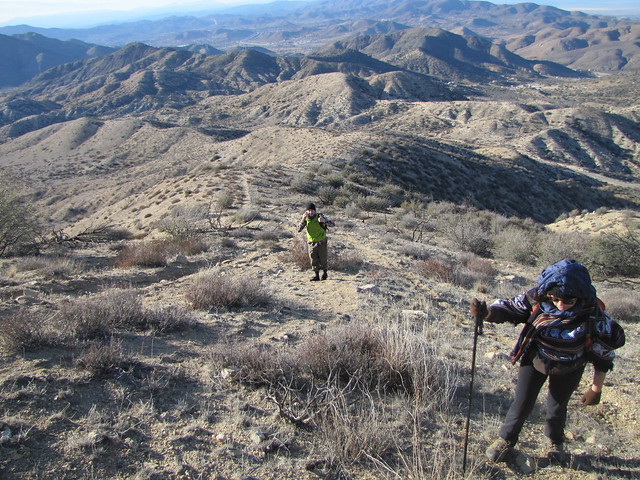 The hike to Mt. Emma is only 2 miles round trip, but it is a relentless climb to the top, about 1000 ft gain 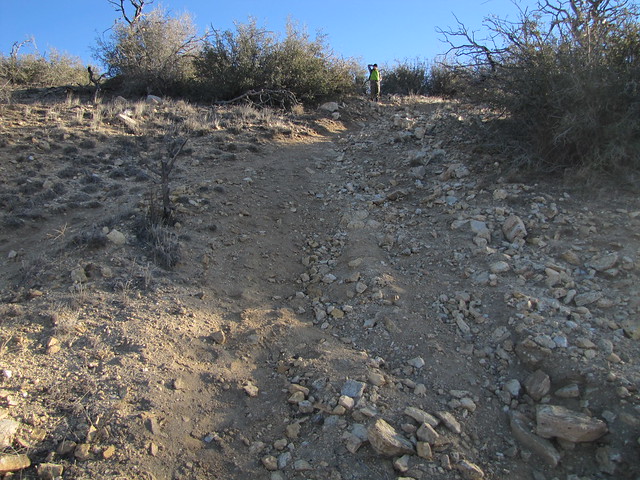 Loose scree and a steep climb.. 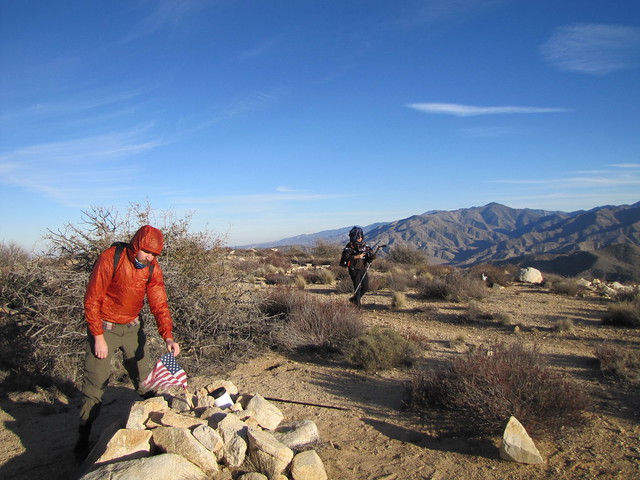 At the summit. Jeremy attempts to hold the flag in place at my request to snap a picture 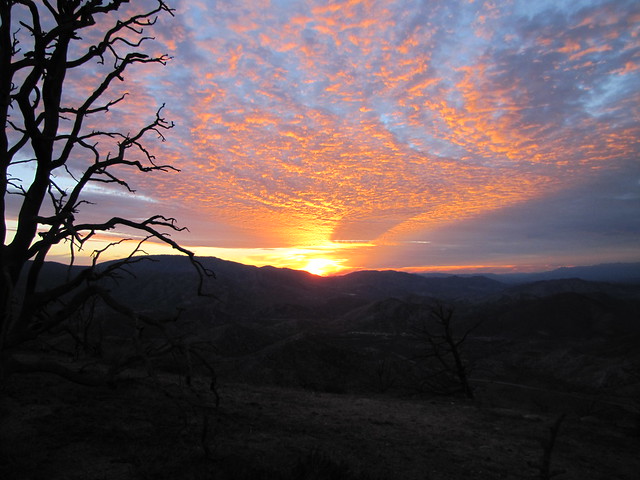 We watched the sky transform into a brilliant array of colors, illuminating various valleys below. 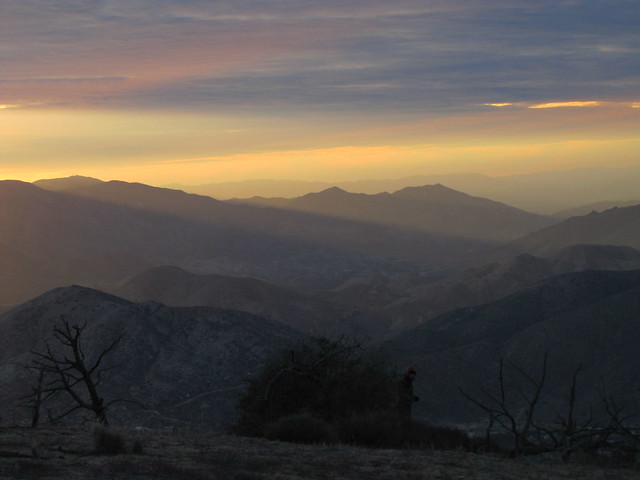 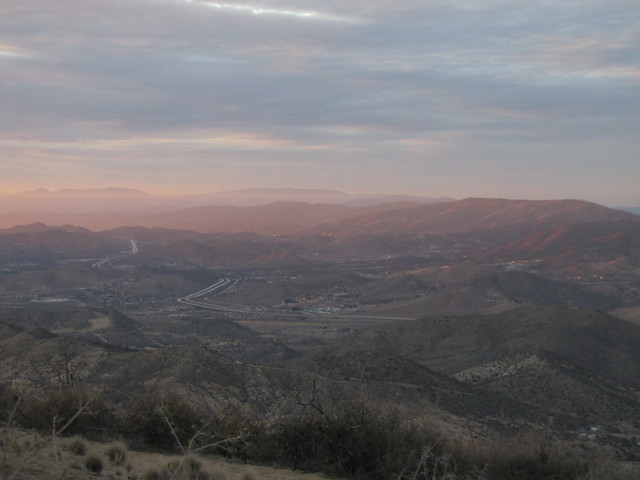 Views for miles around. Amazing views of the desert cities and surrounding San Gabriel Peaks.

As mentioned before, Mt. Emma was named after one of the daughters of the Pallett family. Pallett Mountain, a prominent high point along Pleasant View Ridge and Pallett Creek also bears the family name.

In short, the Palletts were a large pioneer ranching family who made California their home.

The Pallett family migrated from Tennessee to California about the year 1857. George W.A. Pallett and his wife Nancy settled on a 900-acre ranch in Los Angeles County where they engaged in farming. They owned a ranch in Rivera (later merged into Pico-Rivera) which at the time had the largest walnut grove in the state. Some of George’s daughters taught school (including Emma Pallett) and his sons and grandsons worked upon the ranch, or were employed by neighbors as farm hands.

Around 1900, George W.A. Pallett, who was then about eighty-five years of age and two of his sons sold out and went to South America. A new enterprise they started there failed and George died in 1901 in Argentina.

About a decade later the Palletts returned and one on the sons, Thomas A. (T.A for short)  eventually acquired the Shoemaker Ranch consisting of 291 acres of land situated in Los Angeles County, Valyermo.

After buying this ranch, T.A. Pallett placed his son Robert (Bob) Pallett in charge of the farm for many years. The family ultimately had an altercation over the ownership of the ranch that resulted in some legal suits (PALLETT V. PALLETT).

According to a memoir written by Dorothy Evans Noble, former postmaster of Valyermo (1914 to 1930), Bob Pallett was one of the few friends of the mountain hermit, Charles Tom Vincent. When Vincent learned about Bob’s financial troubles he surprisingly produced $5000 in cold hard cash to help him out (from Vincent’s mine profits). Aw thanks so much Aarjay!! Living in the Antelope Valley gives the ultimate access to so much more mountain! Thanks so much for reading!

Another great write-up! Once I am over this flu I am going to check out Louie New combs Cabin.

hehe that darn bug making its rounds! That cabin is definitely worth checking out. thanks for stopping by and reading!

Nice views. And very interesting stuff about the Palletts. Good sleuthing. Where did you get the info, from the Dorothy Evan Noble memoir?

Yeah the part of Bob being Vincent’s friend I got from that memoir. Theres so much more memoirs that aren’t online I bet. Just need to figure out a way to access. Or finally get myself to walk into a library/museum. Seems daunting for a millennial! jk. 🙂

Lovely photos and nice to see where this area is. The Pallett’s certainly get around! Have traced my tree and it goes rather cold once they disembark for USA.