Los Pinetos Peak is an unofficially named highpoint along the Santa Clara Divide Road in Newhall of the western San Gabriel Mountains. It’s also the name of the canyon that runs in the middle of Placerita Canyon State Park. Today, the summit contains radio and satellite towers.

In the 1930s it was one of many fire lookouts in the Angeles. In 1934, the U.S. Forest Service and the Los Angeles County Forestry Department built the Los Pinetos fire lookout. The circular glass enclosed tower itself was twenty-square-feet. Some staff of the lookout included Lee Park in 1938 and Bill Nelson in 1958

However, the lookout didn’t last very long as smog conditions became so acute it was no longer possible to spot fires. By the 1940s, firefighters abandoned the lookout and by 1964 only the concrete slab that held the lookout remained. 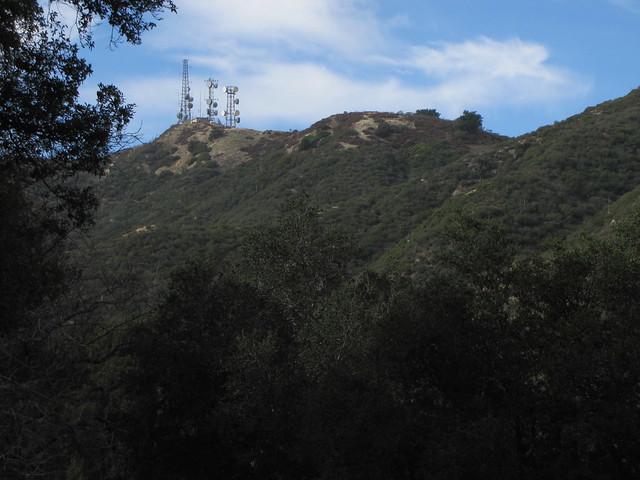 On January 12 1937,  a Boeing 247D crashed into the north slope of Pinetos Peak near San Fernando due to adverse weather conditions, killing 5 out of 13 people onboard. The plane was on its way from Salt Lake City, Utah to Burbank on a stormy morning. Accident investigators determined that a combination of factors caused the crash including: turbulence, rain, ice build-up on the wings and the failure of the pilot to follow recommended procedures that would have enabled the captain to clear the mountainous area in San Fernando to land in Burbank. Captain William Lewis had descended and flown east of his intended course. The impact occured as the aircraft’s left wing tip struck a mountain ridge and slid 125 feet before spinning around and halting to a stop.

As a result of the crash, one man was killed instantly as his body was crushed between two seats, while the others were knocked unconscious. Most would survive but others would later succumb to their injuries. Notable passengers on the plane included Martin and Osa Johnson, American adventurers and documentary filmmakers. Martin suffered extensive injuries including a cerebral concussion and fractures in his jaws, nose and both legs. Osa had a dead body over her and suffered from a fractured knee. 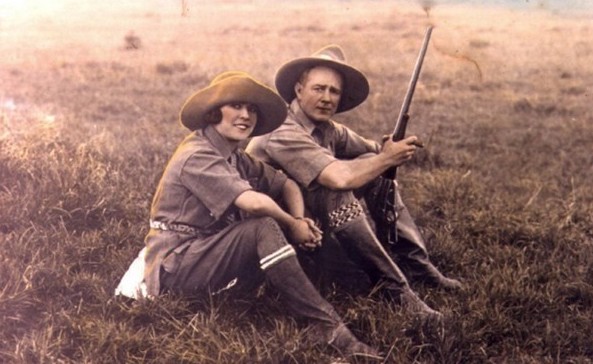 The impact of the aircraft was so loud, residents around town heard the crash, including at the nearby Dulin Ranch. Meanwhile, one of the passengers of the crash managed to crawl out of the wreck and make his way towards the Olive View Sanitarium about 4 miles away in order to get help. Several rescue parties of the hospital hiked to the peak where they found the victims had regained consciousness and were delirious from shock and pain. They were carried to the Los Pinetos fire lookout tower which was about 100 yards away. From there, rescuers carried out the victims in stretchers five miles down to a waiting ambulance.

Martin Johnson slipped into a coma at the hospital and would succumb to his injuries the next day. Three others, including the copilot would not survive their grave injuries.

There is no remains of this aircraft wreckage as most of it was removed the same year. However, a few hikers claim to have found 1% of the aircraft a number of years ago.

Also check out these sources:

-They Married Adventure: The Wandering Lives of Martin and Osa Johnson by Pascal James Imperato and Eleanor M. Imperato

Shortly after the end of World War II, the Army recognized the need for an air defense system capable of engaging high speed, maneuverable targets at far greater ranges than the conventional artillery available at the time. Bell Laboratories developed Project Nike in 1945 as an anti-aircraft missile system. The pressures from the Cold War and abroad in Korea, accelerated the development of defense and Nike-Ajax was born.

In 1958, the Army began upgrading Nike missile sites in the Los Angeles area from the Nike-Ajax missile to its more powerful successor, the Nike-Hercules missile. This second-generation Nike missile was much more powerful: nuclear-capable, with improved speed and range. Los Pinetos, along with Mt. Gleason, experienced the full range of the Nike development, from Ajax to Hercules missile.

1) Missile launching site- the launcher area provided for the maintenance, underground magazine storage, testing, and firing of the Nike missile. 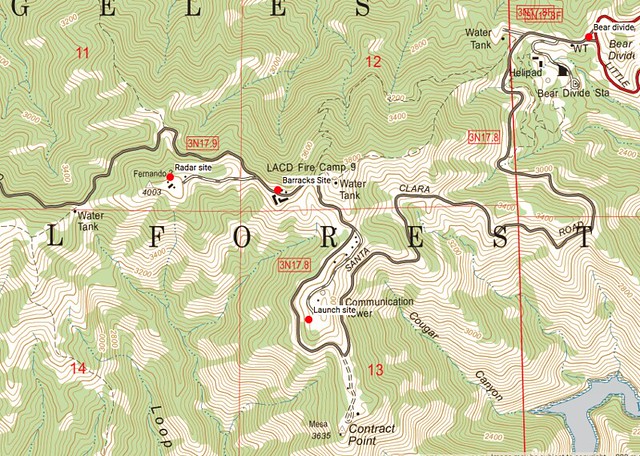 Presently, (2019) you can drive up the Santa Clara Divide Road from Bear Divide to County of Los Angeles Fire Department Camp #9. Before reaching the fire camp, you’ll notice the launch site on your right. 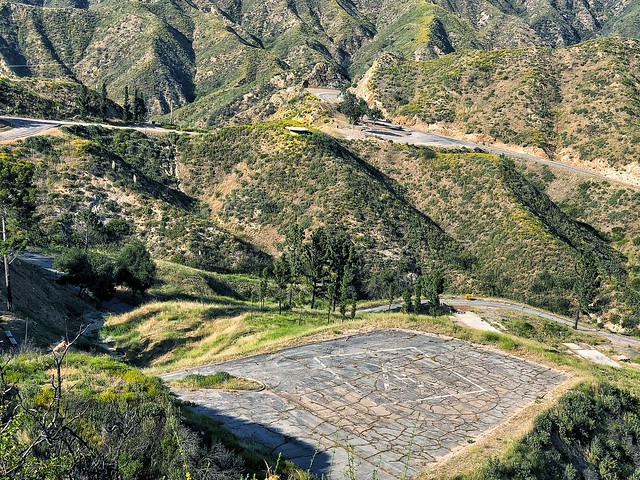 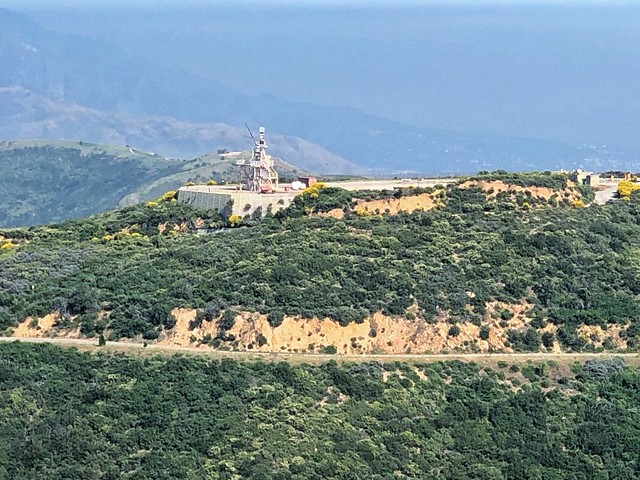 Unfortunately there is no public access to the launch site as there is a closed gate with a private property sign posted. For history’s sake, I’d like to see educational tours of the underground magazine storage area of the launch site. However, I came across a tragic crime that occured here in 1981, so I’d imagine this place also holds terrible recollections.

I’ve attached some photographs of the launch site from the 1980s when a photographer was granted access inside the Nike site courtesy of the Library of Congress archives. 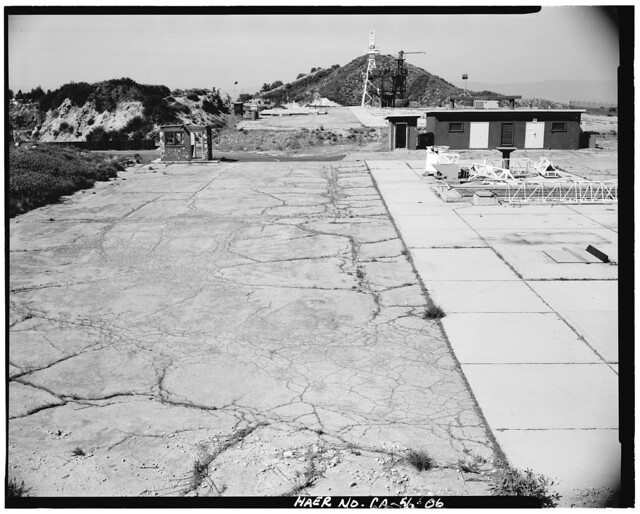 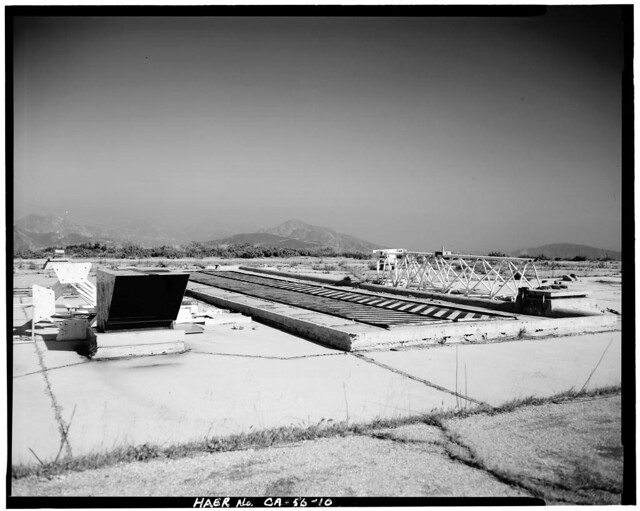 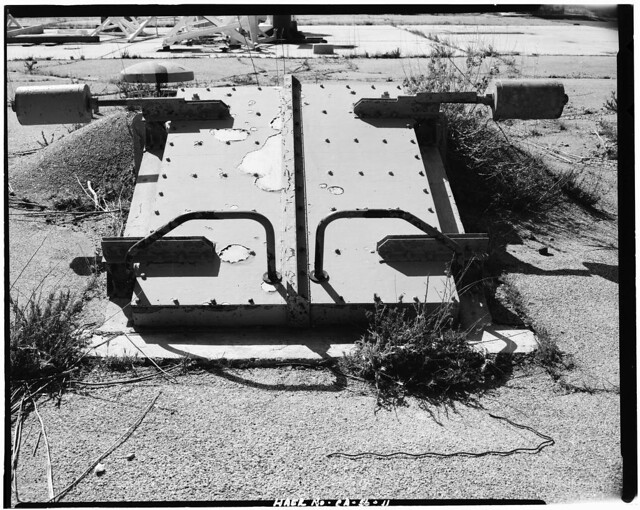 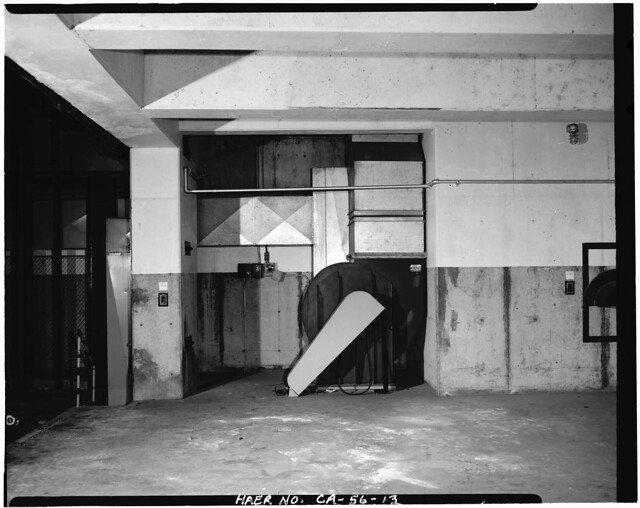 Looking inside Silo with elevator on the left 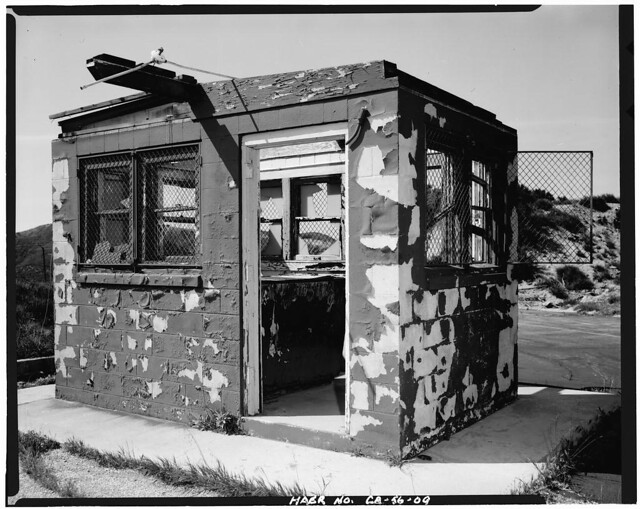 As you make your way to the radar site, drive cautiously through Camp #9 as there is an actively used helipad on the premises. The buildings of Camp #9 you see here were the original Nike administrative spaces and barracks. They’ve been converted into office space and housing equipment for the LA County Fire Department. 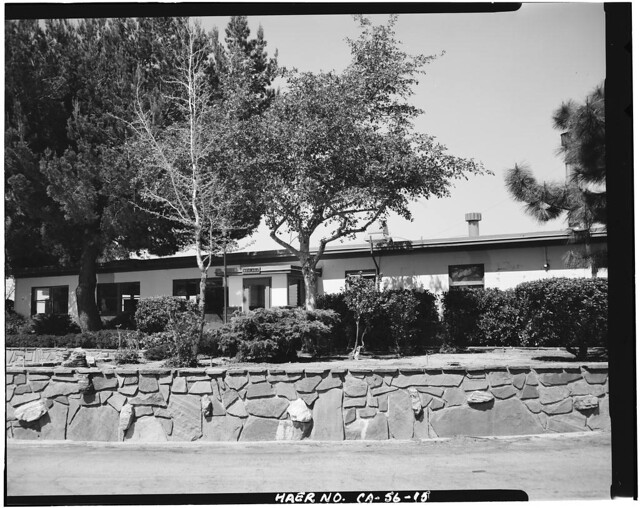 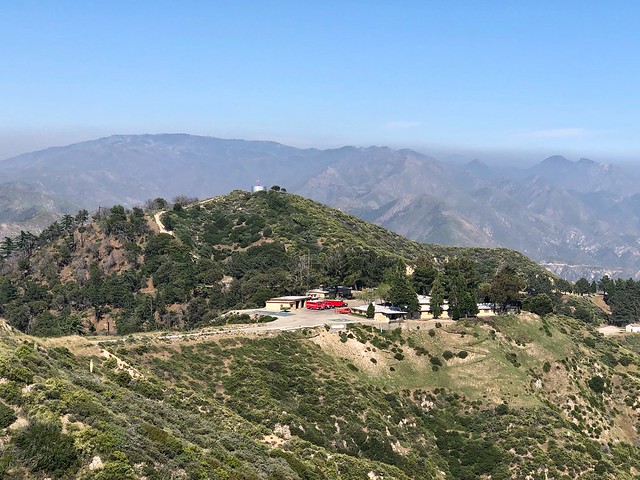 Once passed Camp #9, stay on the left and continue up the concrete road up to the Radar site. There’s room for parking, but you will still only be walking around a fence that encloses the actual facility. It’s pretty neat to peer inside and check out the concrete structures around the radar site. Apparently, its now the site for radio & microwave transmission. The original radar control area was guarded 24 hours a day by a private security guard service but there seems to be no evidence of any security guards or cameras currently. 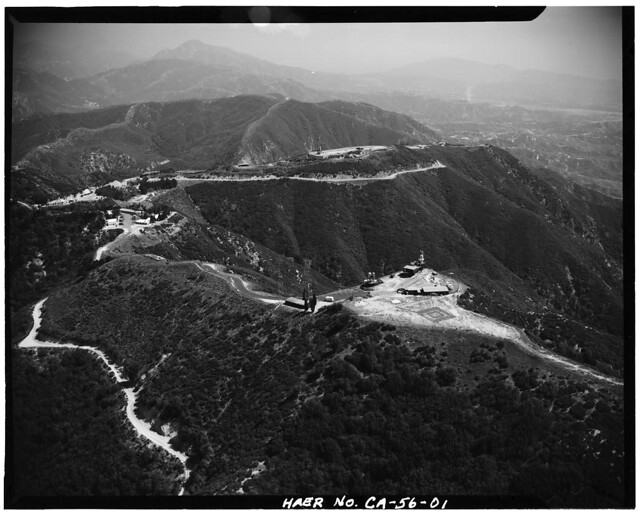 Aerial view of radar site in the foreground 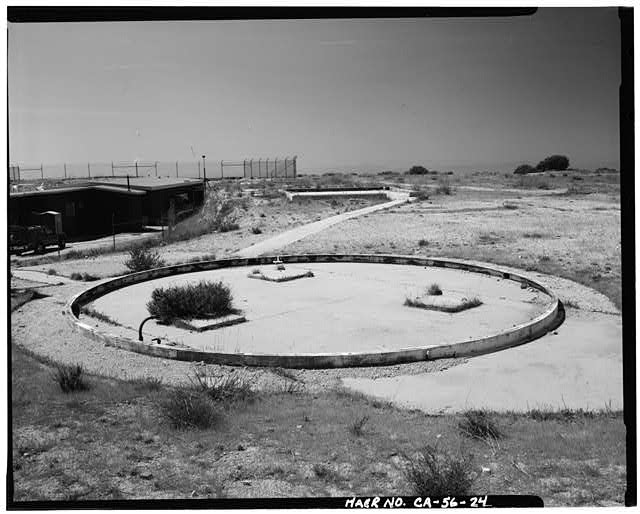 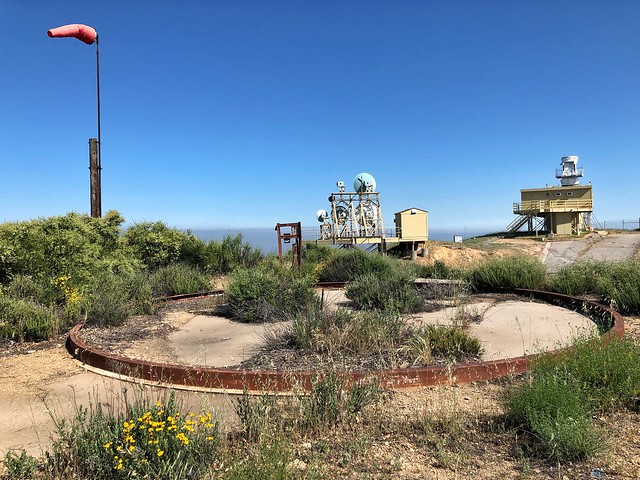 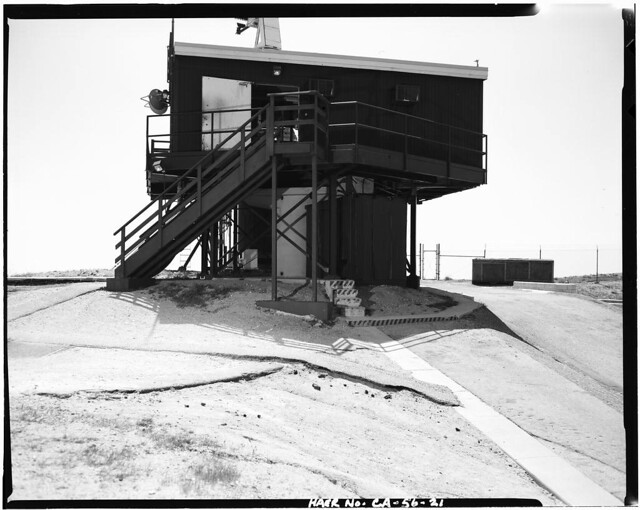 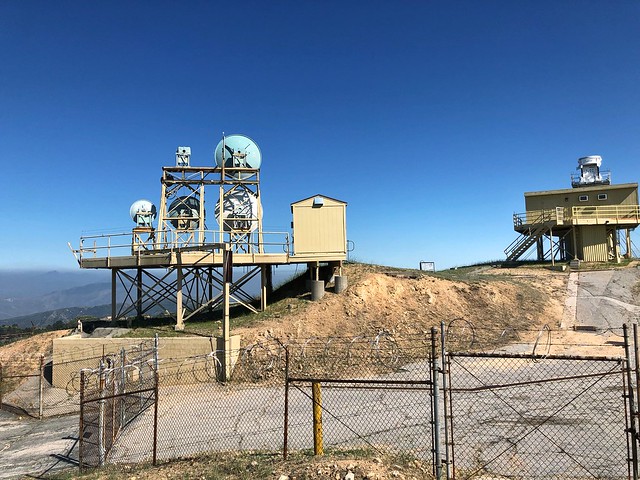 You can see this map of the Los Pinetos Nike Site on CalTopo!

For additional photographs, check out the digital archive on the Library of Congress website

Additional resources check out this site

Aircraft wrecks, Cold War relics, and former fire lookouts are a small part of history in the Los Pinetos/Newhall mountainous area. The wildlife and nature in these mountains always renew too. 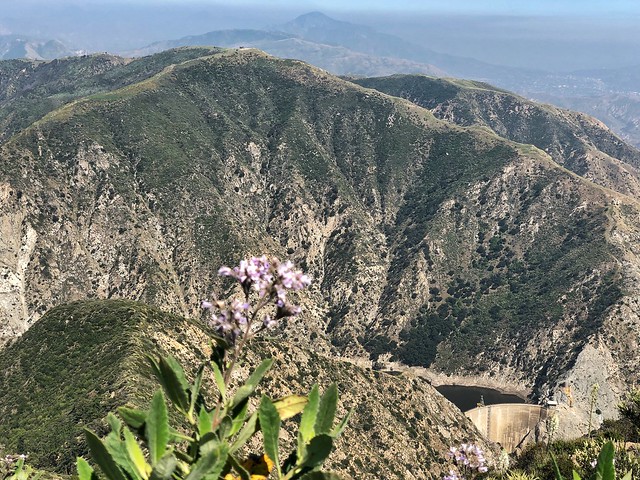 A surprising view of Pacoima Dam 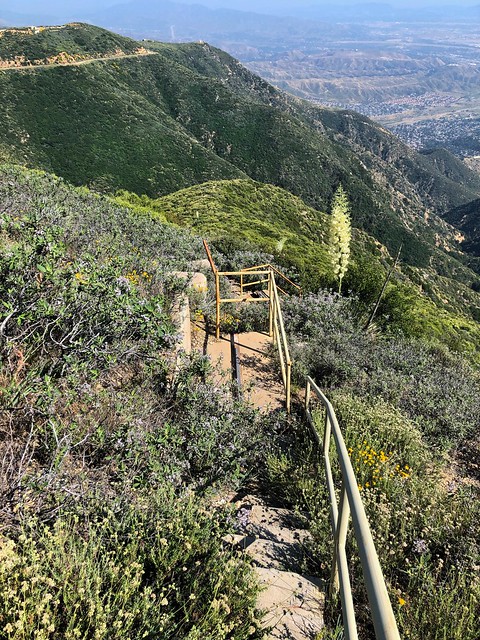 Stairs to nowhere! Except to more greenery 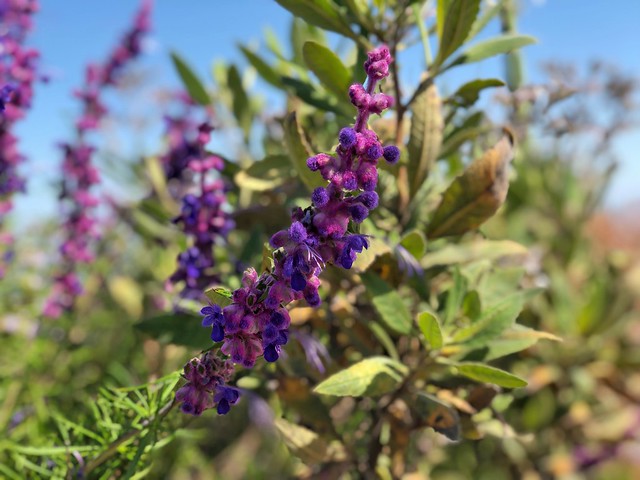 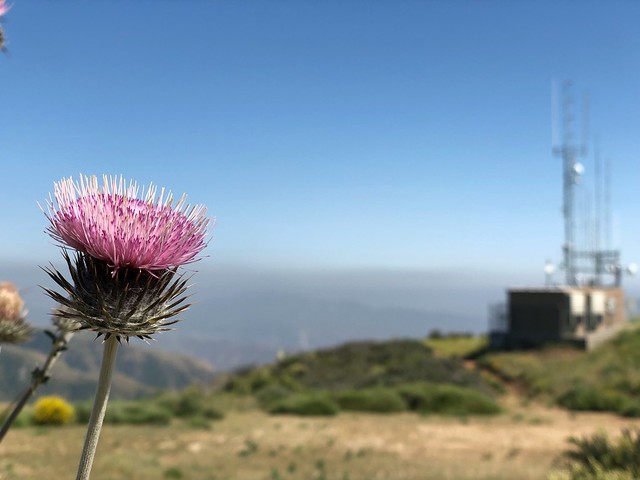 Sweetly and aromatic flowers with plenty of bees 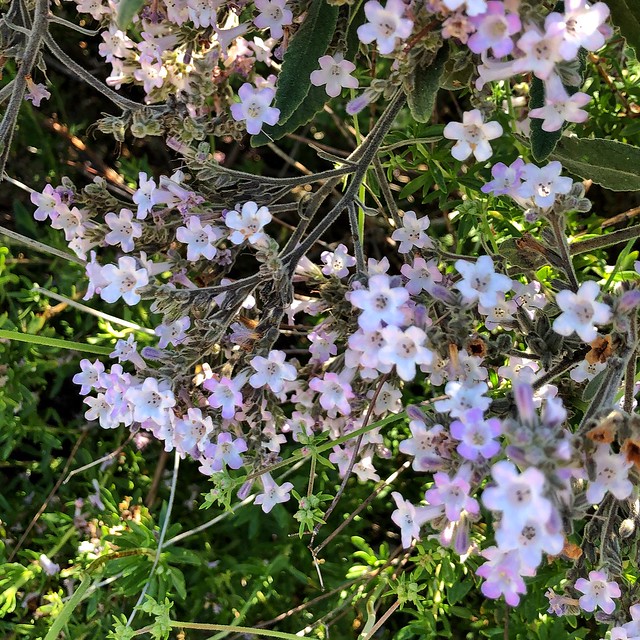 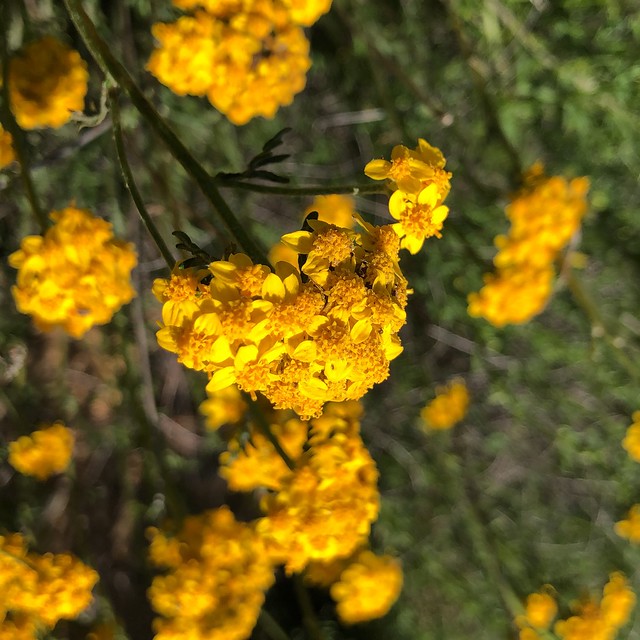 Melissa your posts are informative and very well written. Your photography is amazing. Thanks for taking us along.