Johnstone Peak (formerly San Dimas) Lookout was first built in 1917 to overlook the Angeles Forest north of the Pomona Valley. The San Dimas Fruit Exchange funded the project and gave $1177 to Forest Supervisor Rush Charlton. The lookout tower was placed between San Dimas and Dalton Canyons so it may detect fires that may potentially damage the watersheds above San Dimas. 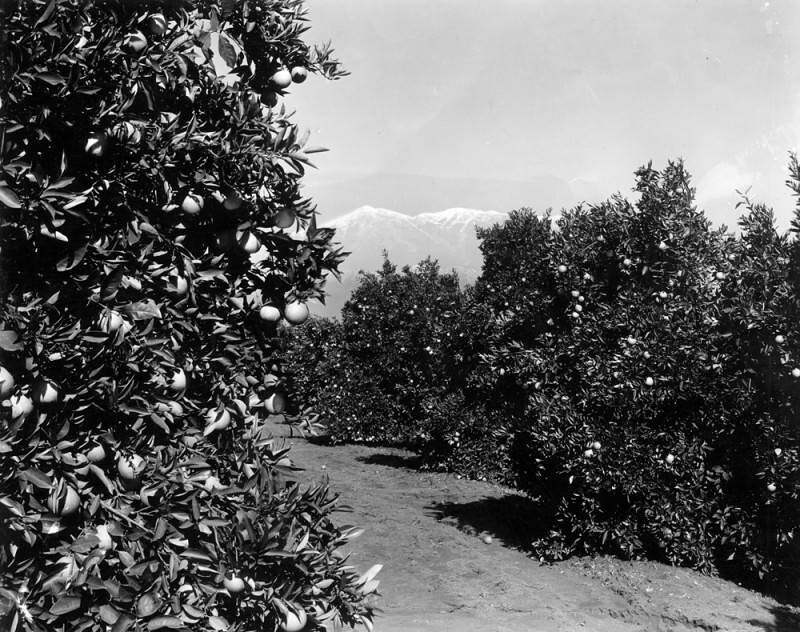 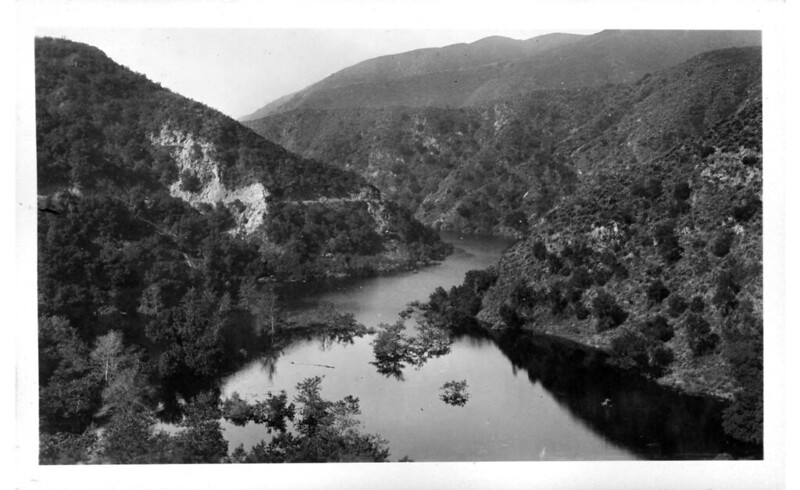 Just two years prior, the San Antonio Fruit Exchange funded the Lookout Mountain tower to aid in forest fire prevention near the Mt. Baldy area. Their efforts proved successful as many fires were detected before they could spread. The San Dimas Fruit Exchange followed suit by funding it’s own lookout tower on San Dimas Peak. Over the years, the fruit exchanges contributed substantial funds to the Forest Service for other fire prevention measures such as building roads, fire breaks, and trails in the mountains. 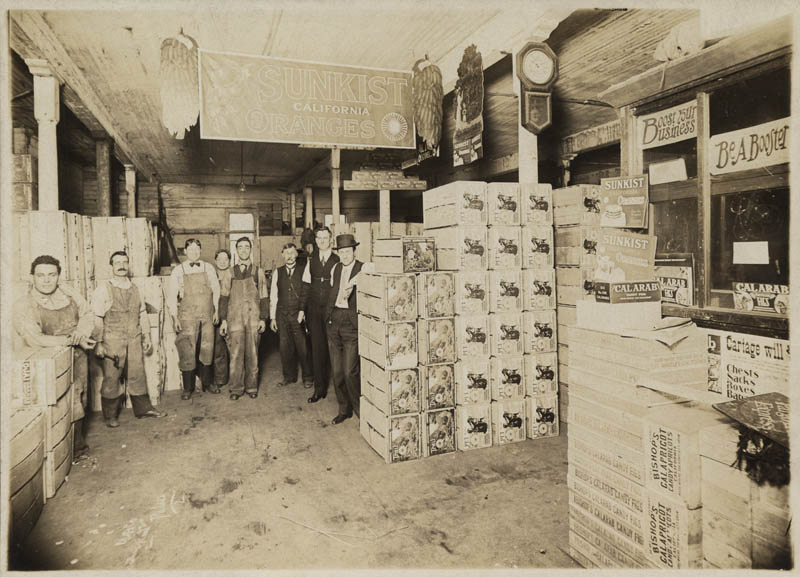 By the beginning of the 20th century, citrus fruit growing had become one of California’s major industries. Credit: California State Library 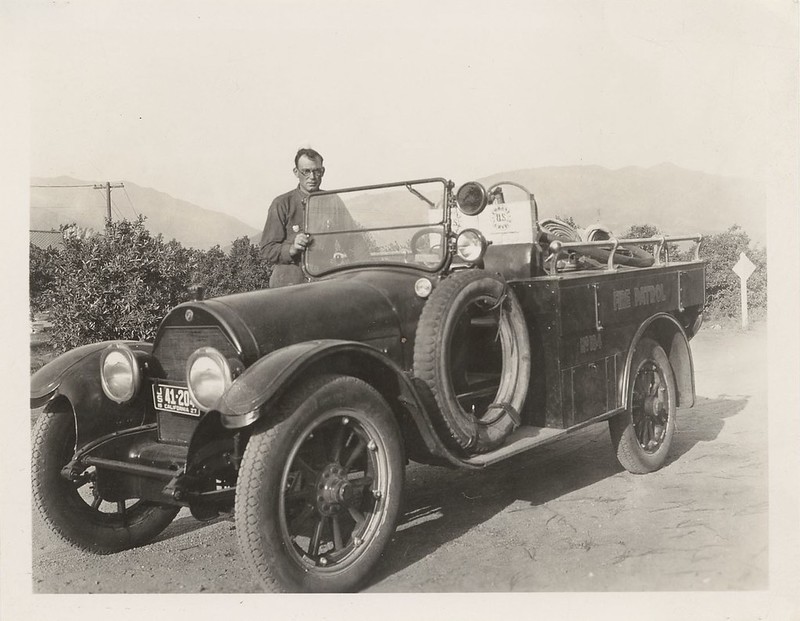 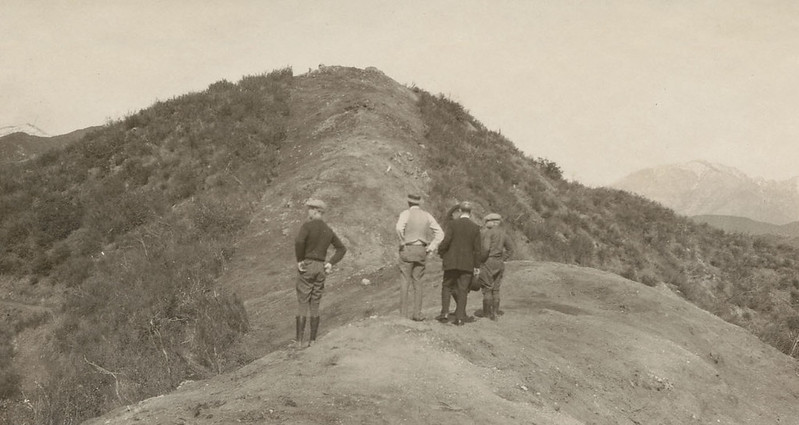 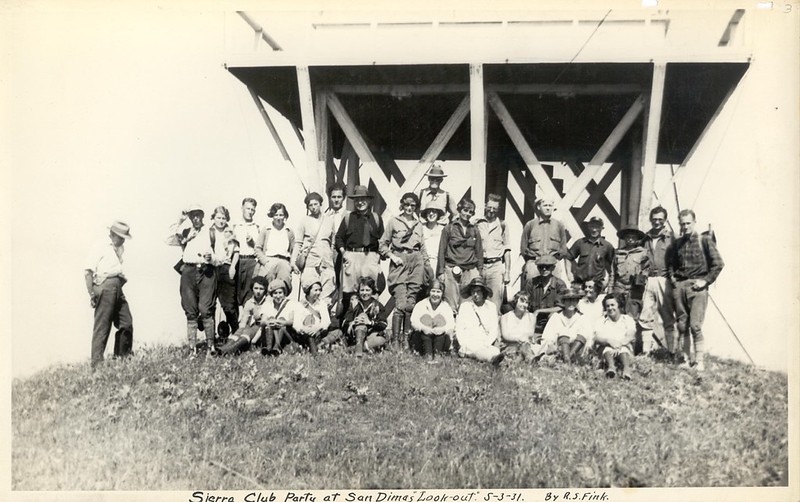 In September 1919, massive wild fires ignited in the San Gabriel Canyon in the Angeles National Forest and burned approximately 60,000 acres. Just a few days later, the fire overtook the lookout tower and completely destroyed the structure. The observer working that night was C.C. Grominger who saw the flames coming over the ridge west of San Dimas canyon at 2am. He had evacuated a few hours before because of the dense smoke.

In 1923 the San Dimas Fruit Exchange was ready to invest in a new San Dimas lookout tower. This time it was built as a short non-battered, open timber tower on a DuBois 4A design cab (14’x14′ wood) It was quickly set up to patrol the areas during the dry summer months. By June 1924 it proved useful when the San Dimas lookout guard J.A. Ball discovered a fire burning up Big Dalton and closing in to the tower. Luckily, the structure was spared.

In August, the San Dimas lookout observer spotted a new fire in San Gabriel Canyon which would ultimately become the 1924 San Gabriel Fire. It burned for 27 days, consuming over 50,000 acres of prime watershed and timber. The fire was fought by over 5,000 men and cost Forest Supervisor Charlton his position over the mismanagement of the fire. 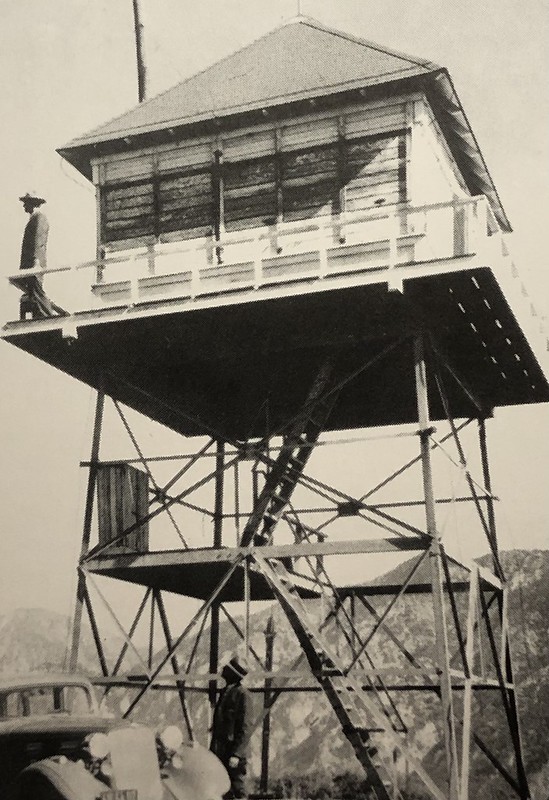 Sometime in the 1930’s the San Dimas Lookout was renovated or replaced with a 30 foot tower made of open galvanized steel angle iron K-brace with the C3 standard 14′ X 14′ wood cab.

In 1933, the San Dimas Experimental Forest was established in order to conduct research in hydrology and ecology. The Experimental Forest encompasses 6,495 hectares of the front range including the upper Big Dalton and San Dimas watersheds. In 1940, San Dimas peak was dedicated to the memory of William Arthur Johnstone, a pioneer leader in California Conservation and Civic Development. The San Dimas lookout henceforth would be called Johnstone Peak Lookout. 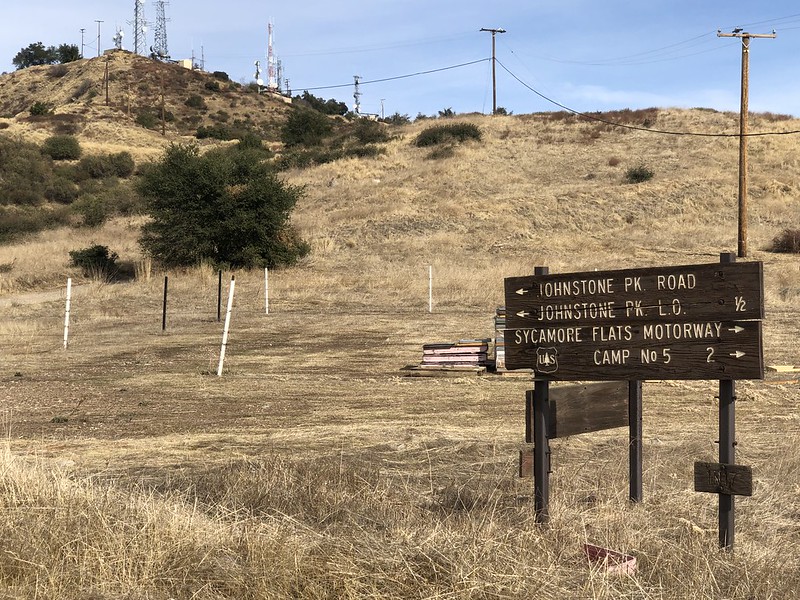 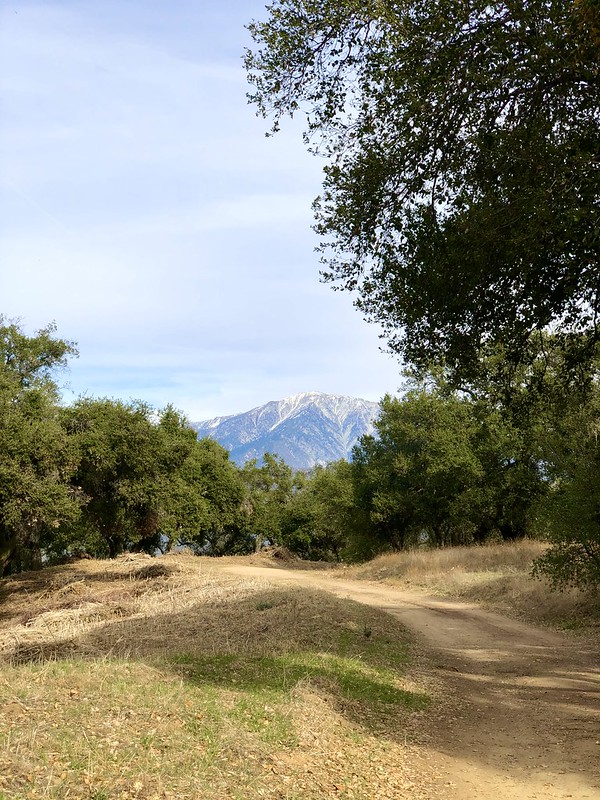 Panoramic views from the front range 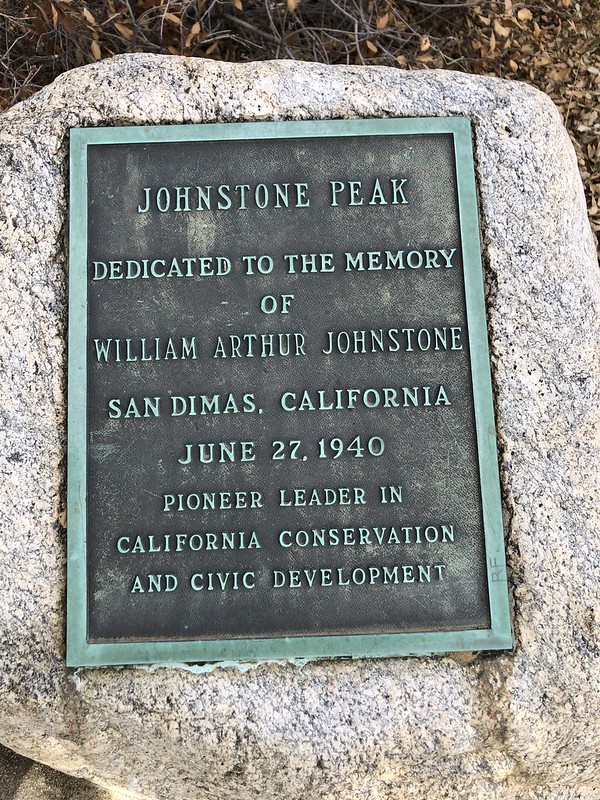 The monument on Johnstone Peak 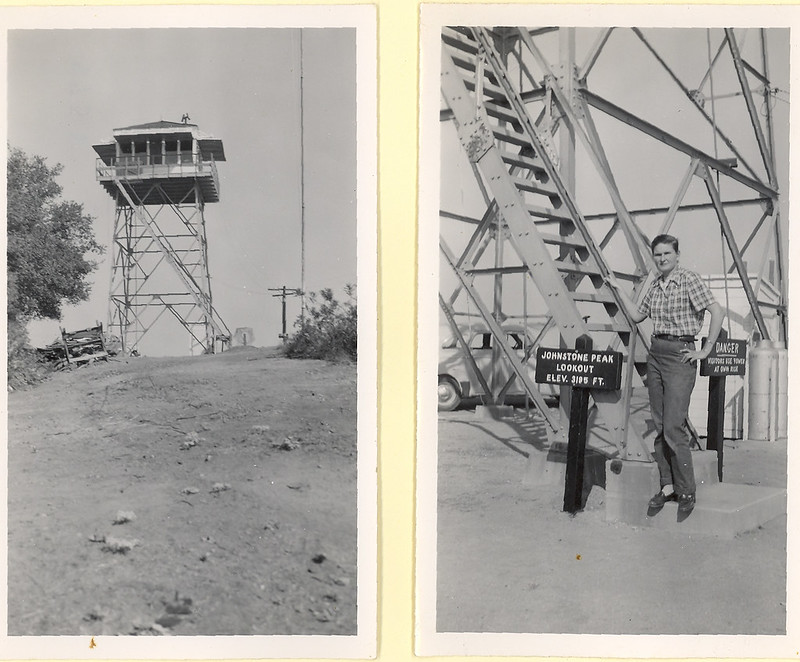 Some Johnstone Peak lookout observers include A.M. Trout (1930s), and Frank Mathys, Everett L. Osborn and Fred J. Haner (1940s). The last lookout observer was Sandy DeLapp in the 1950s as the tower was decommissioned due to smog pollution.

The tower stood abandoned on Johnstone Peak until the early 1990s when it was relocated to LA County Fairplex for display and educational uses. The current tower has been shortened and the size of the cab downscaled and painted green. 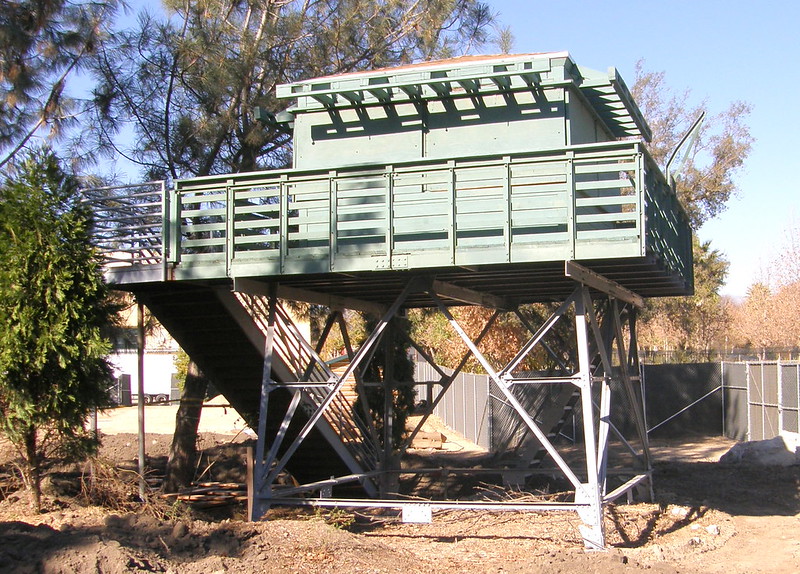 Johnstone Peak Lookout was moved to the LA Fairplex in the early 1990s. Credit: Ron Kemnow 2009 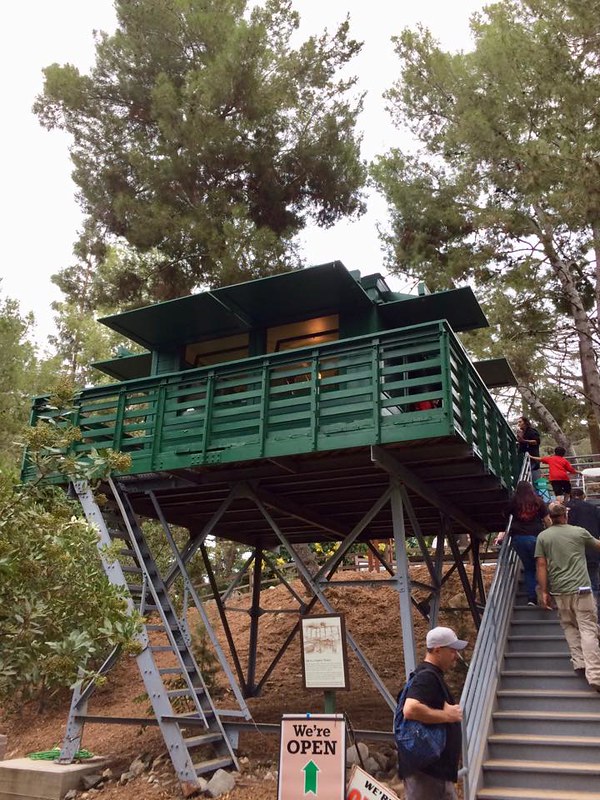 Very cool! Never knew the San Dimas Fruit Exchange was such an integral part of the forest management ($$$).

An interesting piece of history. Thanks for the story and digging up the photos.

Hey Sean, thanks for reading my piece. I dont cross post it to other sites because of the nature of the land management and those users who act the part of gatekeepers. Yet, there is so much history in the San Dimas area!!!