Although the boom days on the East Fork were over with the demise of Eldoradoville, mining continued uninterrupted in the canyon, entering the era of Hydraulic Mining.

After settling in the San Gabriel Canyon in 1859, Henry C. Roberts established a stage service to the Eldoradoville mines. In 1861, he built a general store in lower East Fork on a streamside bench that later became Follows Camp. (This building would then become Sedley Peck’s canyon museum and the longest standing building in San Gabriel Canyon until recent years). At Robert’s store, prospectors sold their gold and bought supplies. Aspiring to have a claim of his own, he purchased the Cecil & Graham claim across the river and invested in hydraulic machinery.

Around the same time, the prosperous Los Angeles merchant, William G. Ferguson purchased his claim just downstream from Roberts. Together with a few other investors he formed the San Gabriel Mining Company with an aim at hydraulic mining and embarked on their work.

The building of these ditches, which may still be traced along the mountain-side, was a stupendous undertaking. Dams were built to divert the river water into settling basins where the sand, which would have quickly clogged the ditches, was removed. Conduits were blasted and hewn from the rock cliffs of the canyon, flumes on steel supports driven into sheer walls, carried on high trestles across gulches and canyons, through clay lined ditches across the high mesas, by gentle grades which soon raised the level, until the water was finally brought to the storage lakes a thousand feet above the rapidly falling canyon floor. 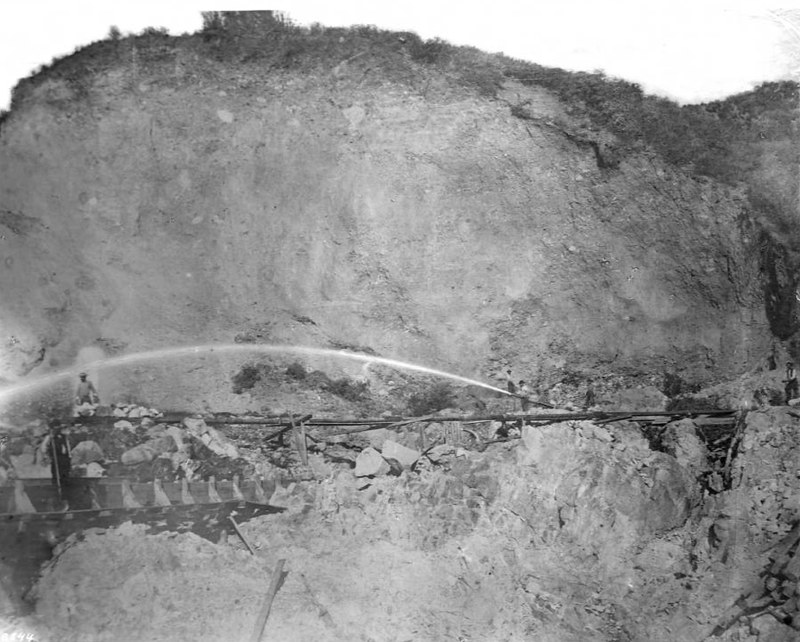 Roberts Mine. From the California Historical Society Collection at the University of Southern California

In 1871, the monitors were turned on and began to blast away the hillsides with powerful jets of water. At first, these ventures were returning substantial amounts in gold. Roberts even turned down an offer for $250,000 in cash for his holdings!  Well, he should have taken it.  As they worked deeper into the hills,  numerous old chambers and gophering tunnels were unveiled: previous miners had already removed the rich-paying streaks, significantly decreasing their profits. Then: the legal troubles. Hydraulic operations were contaminating the domestic water supply with dirty run-off.  The people of San Gabriel Valley protested and by 1874, new state laws forced hydraulic mining operations to cease forever. 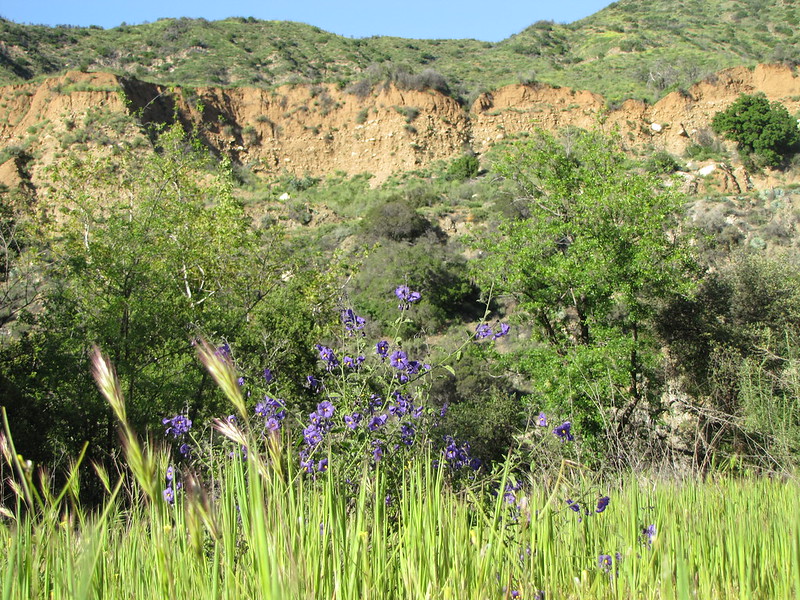 The success of Roberts and Ferguson encouraged other miners to try their hand at hydraulic mining. The most famous undertaking was an operation ending in massive failure by Uncle Dave Buell in the lower east fork.

A map made while surveying lands for the government shows the location of a number of mining claims in the San Gabriel Canyon.

–MAJOR MOUNTAIN SIDE MINES OF THE EAST FORK–

Some prospectors restrained themselves only to the river and nearby slopes. But a few valiant souls scaled the precipitous mountain sides to hunt the “mother lode” that was believed to be feeding the rich placers of the East Fork. The undertaking was death-defying considering the San Gabriel elements: rugged terrain, elevation, and inaccessibility

Charles “Tom” Vincent discovered the mine in the early 1890s, naming it after the bighorn sheep he hunted in the area.  Vincent was a mountain man, civil war veteran, prospector, hunter and fugitive who lived a recluse life based from his cabin high up in Vincent Gulch.

Vincent and his partners dug tunnels deep into the mountains to retrieve paying ore. However, they lacked the capital to further finance equipment and transportation of ore so they sold their holdings but would continue to work for its new owner for a short period.

The Big Horn would have several owners and reach its zenith later in the century: a lengthy wagon road was constructed and a ten-stamp mill brought in. At one point, a crew of over fifty men were working the diggings and expanded new tunnels reaching deep inside the mountain. About $40,000 was returned in gold. 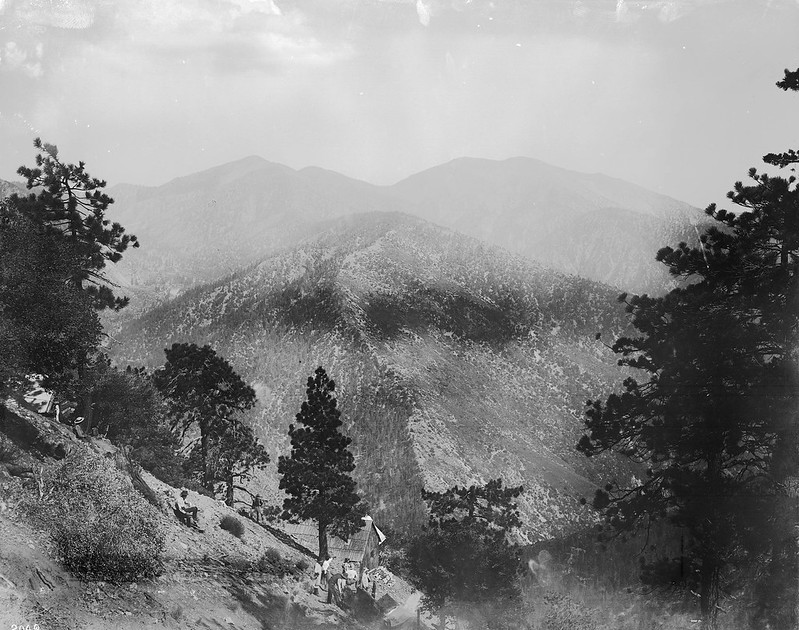 In 2006, the Wilderness Land Trust purchased the 277 acres of the Big Horn Mine from a private independent mining company and in 2011 transferred title to the Angeles National Forest. You can read more in LA Times article here.

Recent attempts to map the entire Big Horn mine has found it is over 8,700 feet not including additional tunnels that have been collapsed or clogged.

Today, with a short jaunt you can visit the Big Horn Mine to see the ruins of the 50-ton flotation mill building built in the 1930s following the same old wagon road the old-timers used to haul out ore. And with a brief detour you can also visit Vincent’s Cabin (34.3679, -117.7444) and daydream of life in the pioneer days.

In 1897 the Native Son Mine was discovered and developed on Prairie Fork, near the headwaters of the East Fork. Prairie Fork was so named because early settlers herded cattle there to feed on the rich grasses. It is said that the two suspects of the 1857 Mormon Massacre in Utah built the first cabin in Prairie Fork, settling there to hide from the law.

Six tunnels were bored into the mountainside and a 3 stamp mill was erected nearby. It would later be replaced with the Victoria Silver Mine 10-stamp mill, but the mines were closed in 1920 from not enough production.

A trip by Hugh Blanchard, Richard Collier and other member of the Socal Grotto took a trip to these mines in 2005. Only 2/6 tunnels were open to explore, the others have been collapsed.

Cave Pearls near the end of the mine. Photo by Richard Collier, 2005

Gordon Stanley and Ben Miller discovered a promising ledge while exploring the precarious cliffs above the East Fork narrows and filed their claims in 1915. Stanley worked the mine as Miller built the “Wetwater Trail” to ease access to the site. This trail was about 3 feet wide and carved across the precipitous wall. The name of the trail probably came from a spot in which water seeped through the rockface and puddled the trail. The mules were frightened on traversing the seeping water and would try to turn around. However it was this trail in which their pack mules hauled in equipment to build a cabin and small ball mill.

The mine was last worked on in 1939 before finally abandoned.

A forest fire in 1953 destroyed the cabin and mill building while detonating abandoned blasting caps. The mill machinery was yanked loose and crashed at the bottom of the Narrows. Today theres still implements left and even an ore cart still inside the adit…

High in the south face of Iron Mountain, John James Allison discovered gold bearing quartz at 5,200 feet. Allison and his three sons began to develop the mine in impressive efforts: hauling heavy parts in almost unimaginable ways.  They carved a trail around the mountainside and managed to drag heavy cast-iron parts by mule and sometimes by a system of cables and pulleys. Several small cabins were built nearby. Crushed ore was stored in a bin near the main workings and transported downslope to a mill; the millsite contains remnants of a ball mill, a rake classifier, and a shaking table. However today the cabins are gone, torn down by the Forest Service.

Another cabin at Allison mine. Photo by Charles Hayden, 1978.

The ore veins pinched out and the Allisons never recovered their investments. It was worked on and off from 1915 until up to 1942. About 10,000 tons of ore were recovered from the Allison Mine, yielding about $50,000 in gold.

Read my trip to Allison Mine for current photos.