“Although the mine building and mine are less than a quarter of a mile from the Angeles Crest Highway….the Bell Hartman Mine remains virtually unknown.” – Hugh Blanchard

The Bell Hartman Mine Discovery

I was out exploring the historic Angeles crest trail by Mt. Mooney when I saw the most curious thing: way off in the distance was a two-story cabin perched on a rock face. I was incredulous at the sight and rushed home to research it. I’m a frequent visitor to the site lagoldmines.com, so it didn’t take me long to connect the dots.  The description and location fit the article of the Bell & Hartman Mine. This is the story of the day we explored it, the first recent rediscovery since Hugh Blanchard’s days.

The plan was to camp out at Mt. Mooney on Friday evening so that we could so we could check out Stoney Ridge Observatory and Devils Peak during sunrise the next day and then try reaching the mine. I’ve been to this observatory before during sunrise and the sky lights up brilliantly in an array of pastel colors.

We arrived at the saddle of Mt. Mooney by night and headed up. The summit was blocked with fallen trees, scorched from the 2009 Station Fire years ago, so we set up camp just off from the summit. The night felt way colder than I anticipated and keeping warm in the tent was a struggle made worse by the constant stirring of my dogs. They stood guard and alert in their new environment, listening for any suspicious critters that may come our way. As much as I loved bringing them, they made for a hellish night sleeping.  Shortly after sunrise and a few hours of tossing and turning, I started my morning since I wasn’t about to rest well. We took our time with breakfast and some of us went even back to sleep for a bit. 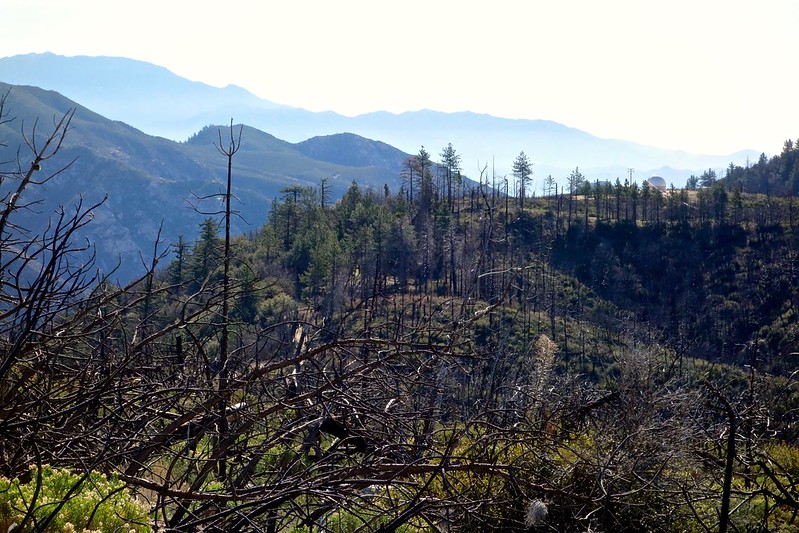 View from the camp spot. Stoney Ridge Observatory off to the distance. 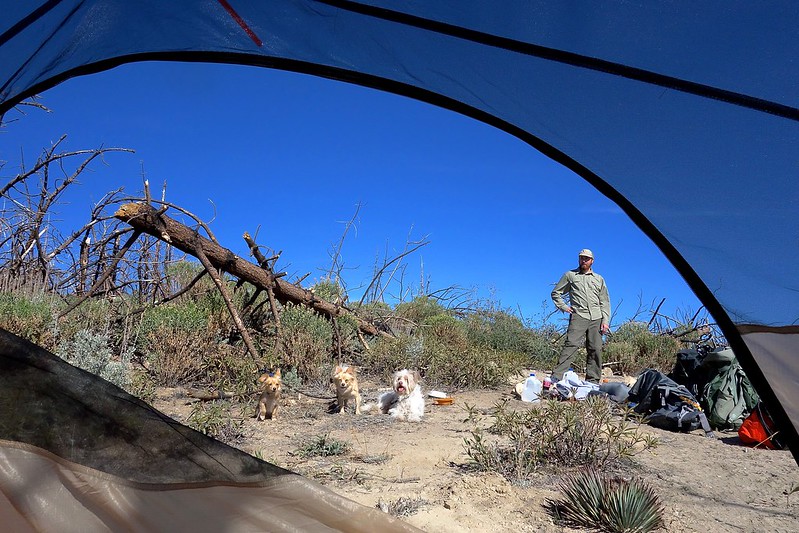 Jeremy looking like someone from the Great Hiking era 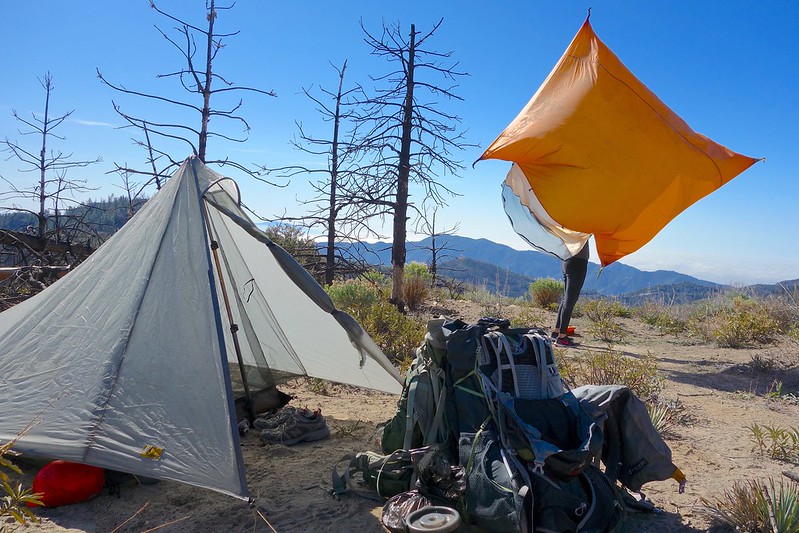 Slowly cleaning up and packing up our stuff

Heading for the mine & cabin

We pulled up the maps and negotiated on the best approach. Initially, we scrambled down a gully in which we painfully slid the steep parts. This was all made much harder having to carry the dogs. About 20 minutes in, we jumped on a faint track that went left towards the mine. The trail became steadily more apparent and shaded. 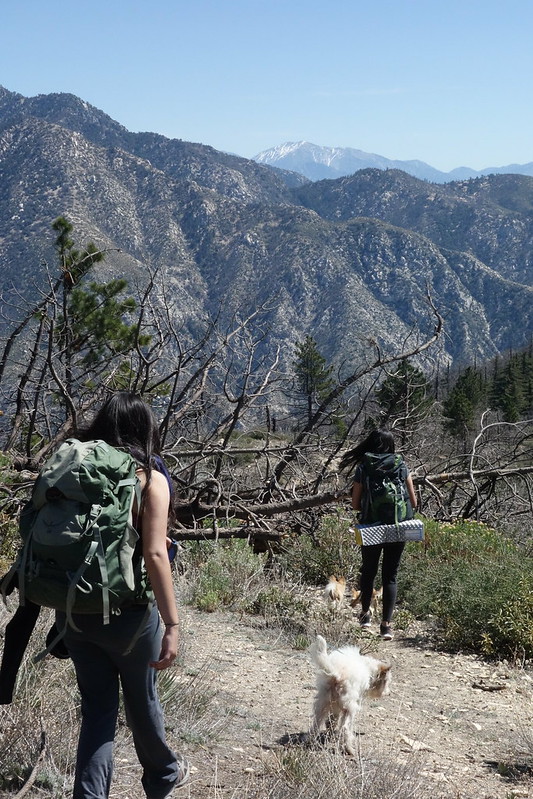 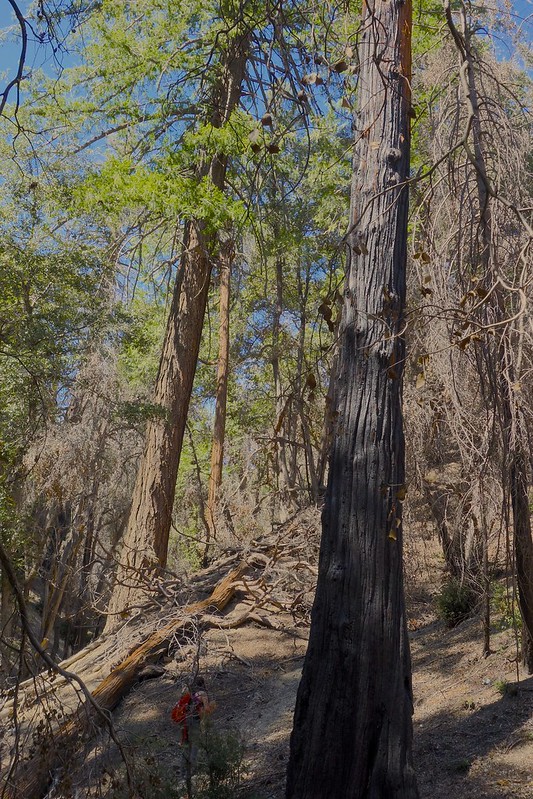 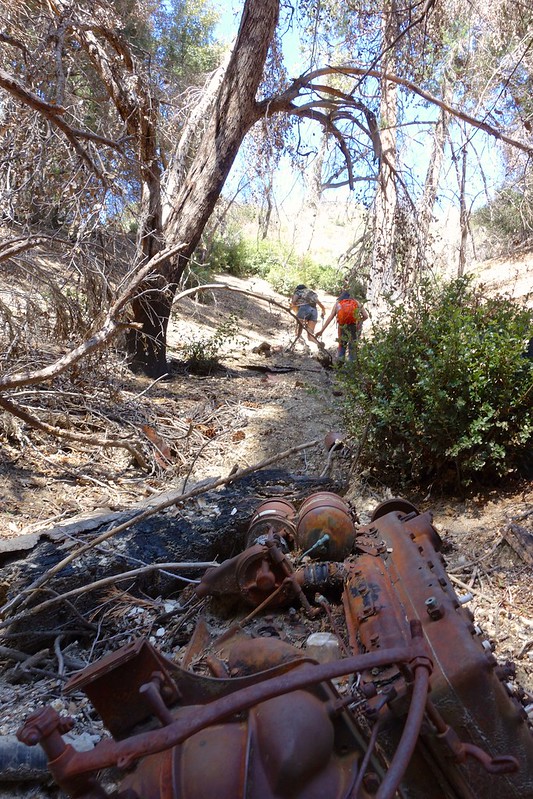 Rusted equipment in the canyon below the mine including this engine.

The trail contoured down into a canyon below the cabin. From the canyon we could see the cabin sitting above us. The only major obstacle now was the last 100 feet of treacherous terrain that climbed relentless up. After leaving the canyon, the climbing was part crawl. However, once at the cabin, the reward was immediate and worth the pains of getting there…

The Bell Hartman Cabin and Mine

In his website, Hugh Blanchard claims this mine is called the “Bell Hartman” because of a similar location description in John W. Robinson’s Mines of the San Gabriels. However, it is likely not the Bell Hartman. According to U.S. Geological Surveys, its actually called the Boatwright Prospect, and its owners are unknown. But since the name has stuck and for convenience sakes, I’ll refer to it as the Bell Hartman. 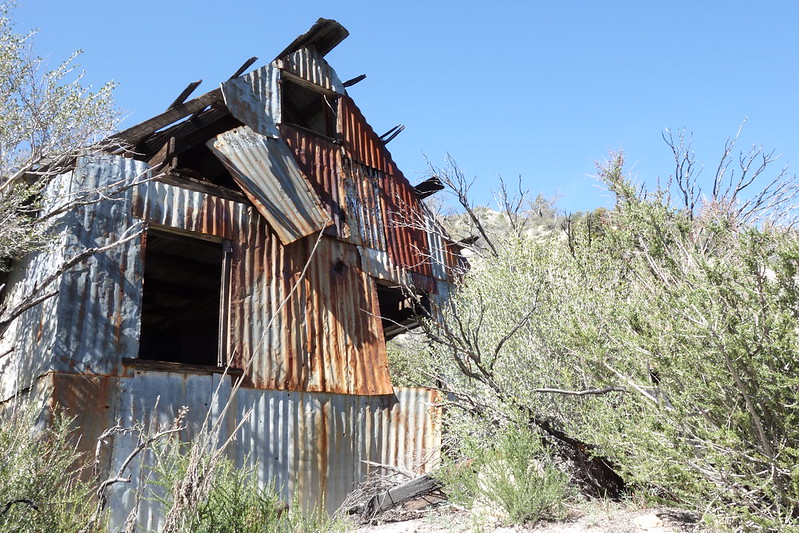 The cabin is preserved well, protected by its inaccessibility in the mountain 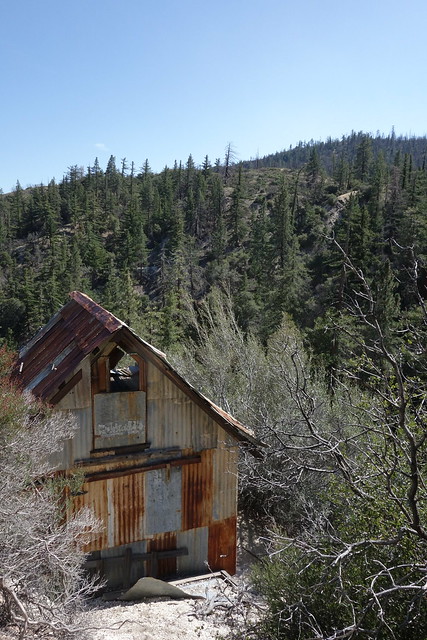 Its a small two story building roofed and sided with corrugated tin shingles and is 14′ X 12′ in size. 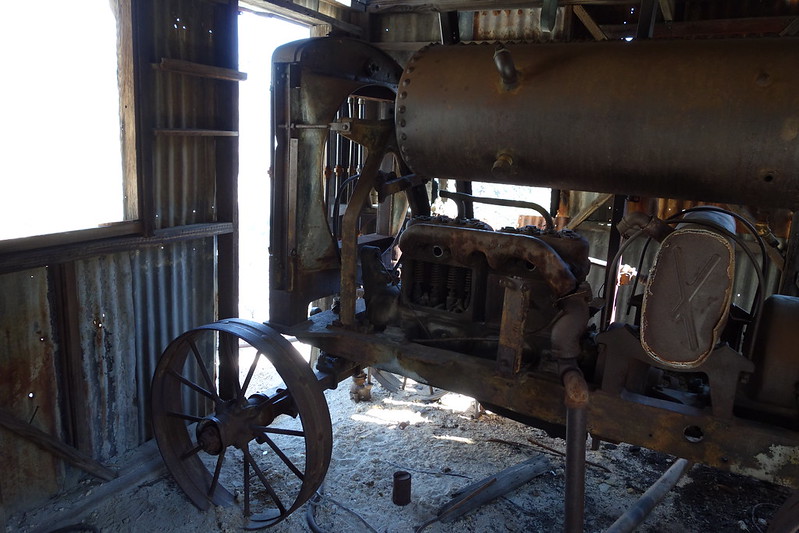 The first floor contains a work bench, cabinet and a huge 8-cylinder compressor on metal wheels. 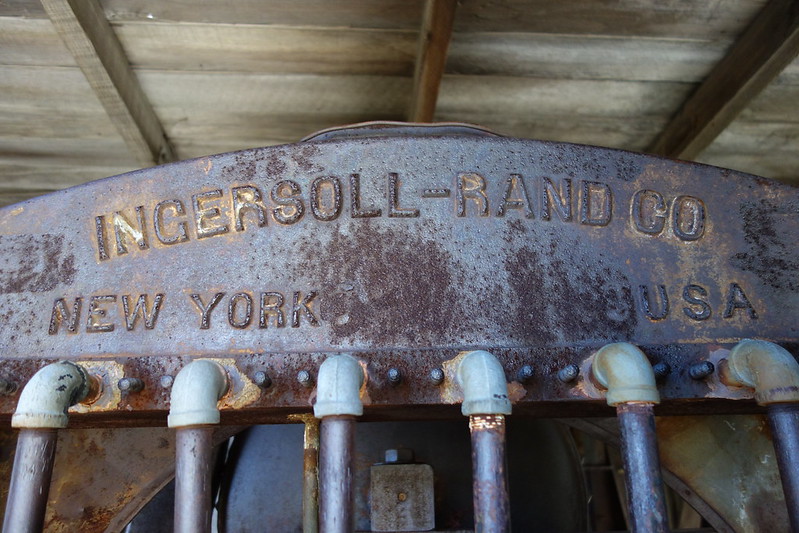 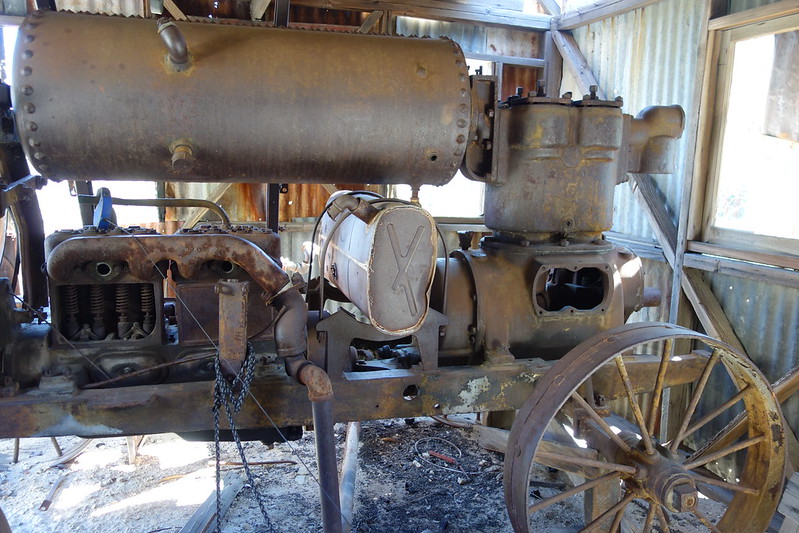 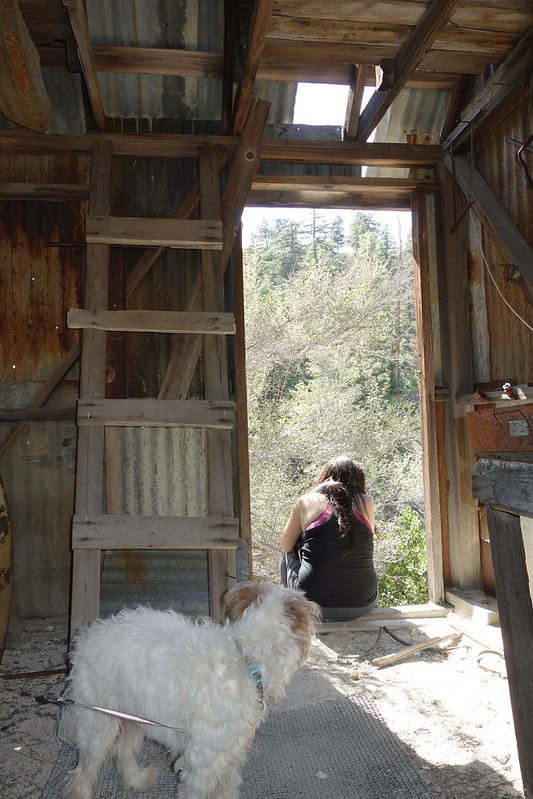 A wooden ladder leads to an empty second floor thats more like a crawl space. 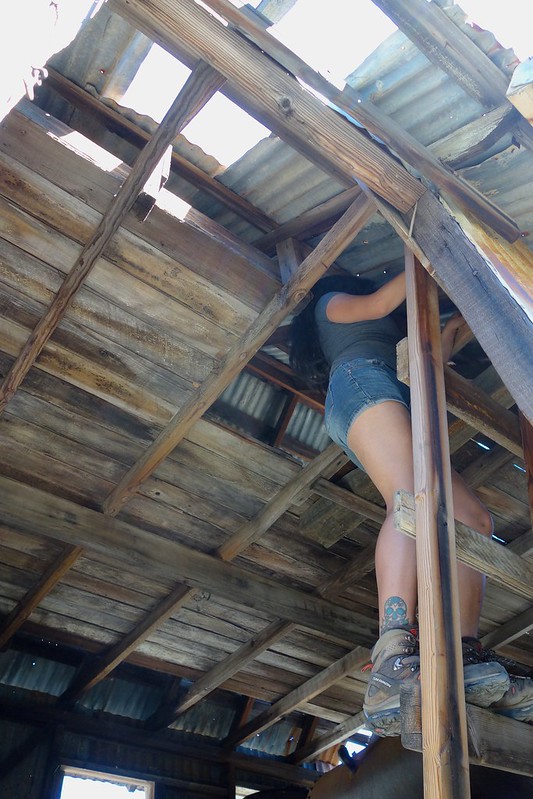 Hmmm… is this thing sturdy? Better not take my chances. 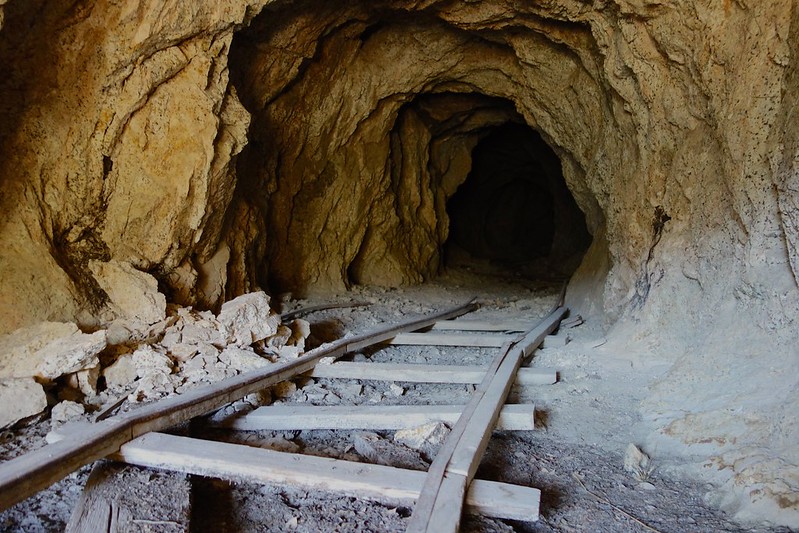 A bit further down from the cabin theres a faint trail that leads to the actual mine. The mine doesn’t go in very far. 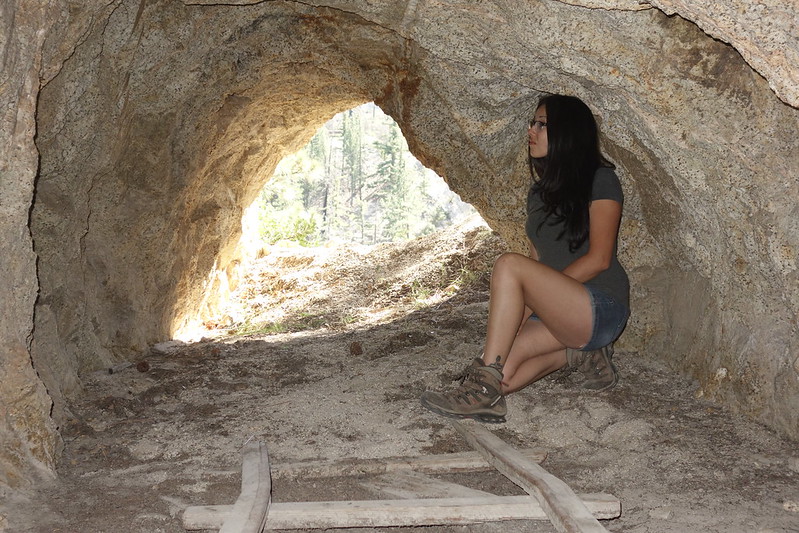 The writer in the mine.

The Bell Hartman adventure dedicated to Hugh Blanchard, author of the site lagoldmines.com for all his efforts on preserving local mining history. Please respect the artifacts in this place, don’t take anything so others can enjoy the history.

Hard to believe this mine is so close yet so far. From Hwy 2 it is so far down the steep slope you can’t see it. I found a trail today that led just about straight to the cabin from another road. Less than 20 minutes each way. With that big old compressor there in the cabin, you would think the mine would be bigger. I’ve known about the mine for years but never visited it. Your video prompted me to take advantage of my free time today. Thanks. David

Thanks for your appreciation of history and curiosity of our local mountains! Im glad to serve as inspiration to explore our beautiful mountains

Other than the one mine workings you did locate, have you ever had a chance to explore more of the area looking for another mine adit that might be related to these workings? Seems like there was a substantial investment in machinery (I can’t even imagine how much work it must have been to winch that wheeled Ingersol_rand compressor up that mountain), for such limited mine workings. Note, I viewed a video that featured yourself and Pharroh on youtube. Really enjoyed it.

Bill,
Thank you so much for checking out that Youtube video and my website! I only read about a tunnel that was located above the angeles crest highway, that is still on old topo maps. However it was sealed up by the Forest Service probably around the time the Highway was being built/maintained. It was covered by Hugh Blanchard on his post about the Bell Hartman Mine: http://www.lagoldmines.com/index.php?page=631306.txt
It’s the last picture on that page, where hes standing on the sealed entrance. I’d imagine that there was extensive diggings there.

What is the easiest way to get there from the crest? is it off of the dirt road with the observatory?

Is there any way I can contact you via email on some rough directions to get to the cabin? Extremely interested and my lips will also be sealed. Inspiring write up. Thanks!

This is such a awesome site. Thank you! Im %99 sure of the mines location. No worries though im into preserving history!