One of the earliest aviation accidents in Los Angeles involved a hot-air balloon called The American that launched from Pasadena in 1909 and crashed into Strawberry Peak. The balloon rose quickly and in some light winds, drifted over the snow-covered San Gabriel mountains. It headed directly towards an ensuing storm. The following excerpt is from the now-defunct site E-Adventure.net:

Bolts of lightning lit up the sky above the clouds. There was hail and it was freezing cold. The group decided it would be best to try to land. Mueller agreed and released gas from the bag. Rapidly the balloon descended and most of the men gasped for breath. As they popped through the clouds at seven thousand feet a jagged peak was seen with a small plateau to the left. They aimed for the clearing and the balloon alighted softly. The men grabbed onto brush to hold the basket steady as the giant bag settled across the bushes and rocks off the side. No one was hurt and the ride was over at 4:15 PM, just one hour and fifteen minutes after take off!

After the landing on Strawberry Peak, Captain A.E. Mueller and passengers camped out for the night in low temps and snow showers. One of the passengers found a match in his pocket despite a strict rule not carry them near the hydrogen balloon. A fire kept them a bit warm for the night. The next day the group descended Grotto Canyon and eventually stumbled upon Colby’s Ranch, where Mr. Colby was home to get the men help.

The balloon was later recovered from Strawberry Peak by burro and repaired to be used again. Account of The American being brought back by burro in the Los Angeles Herald, May 2, 1909 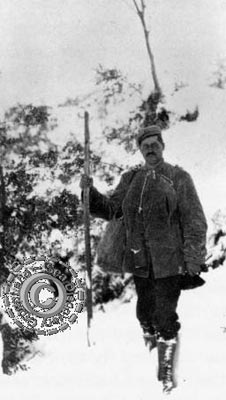 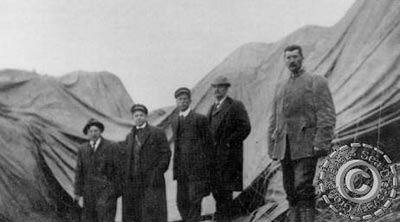 Photo of the landing site taken by Harold Parker with his Kodak Vest Pocket Camera. Courtesy of Donald A. Parker

This account is written about in Historic Aircraft Wrecks of Los Angeles County by G. Pat Macha

But to really relive the detailed account of the story, I recommend you get a copy of PERILOUS VOYAGE OF THE BALLOON AMERICAN, by D.L. Parker (1993). The book contains rare family photographs passed down from one of the passengers aboard The American.